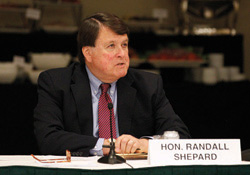 Randall Shepard: “Respectable task forces go out and try to get their ideas implemented. And that’s what we intend to spend the rest of our time doing.” Photo by Tony Avelar.

The final report of the ABA’s Task Force on the Future of Legal Education should come as no surprise to anyone familiar with the task force’s previous work. The main difference is what it plans to do with the study.

The 41-page report (PDF) (with recommendations) released in late January essentially says law schools as a rule are too expensive, too much alike and too focused on doctrinal instruction to provide enough of the kind of practical skills training today’s new lawyers need.

It also says that law school accreditation standards—administered by the ABA’s independent accrediting arm, the ABA Section of Legal Education and Admissions to the Bar—stifle innovation and impose too many requirements that increase the cost but not necessarily the quality of a legal education.

And it says that state supreme courts and bar admitting authorities are too wedded to the idea that only people with JDs from ABA-accredited law schools are capable of providing basic legal services to those who couldn’t otherwise afford a lawyer.

None of this is at odds with anything the task force has previously set forth, either in its draft report issued in late September or in its working paper, which was released in early August.

While the final report contains many changes from the draft report, most of those changes are minor. The key findings and recommendations are essentially the same.

In fact, the only big thing that has changed since the draft report came out is the task force’s end game. Until late last year, the task force had planned to submit a package of proposed policy recommendations to the House of Delegates at the ABA Midyear Meeting last month in Chicago. But that plan had to be shelved in December when the Committee on Rules and Calendar, the House gatekeeper, rejected the task force’s proposals on procedural grounds.

In light of that development, task force members have decided instead to spend the last months of their appointment, which ends in August, lobbying on behalf of their recommended changes before the various participants in the legal education system to whom they’re addressed.

Task force chair Randall T. Shepard, the retired chief justice of the Indiana Supreme Court, briefed the House on the task force’s findings at the midyear meeting. Shepard says some task force reports sit on a shelf and gather dust, but this task force is determined that its report not be one of them.

“Respectable task forces go out and try to get their ideas implemented,” he says. “And that’s what we intend to spend the rest of our time doing.” (See the video of Shepard’s address to the House of Delegates at the ABA Midyear Meeting.)

The task force is recommending, among other things, that:

• The ABA create a new task force to undertake an in-depth examination of the law school price and funding issues it described in its final report, and establish a mechanism to institutionalize the process of continually assessing and improving the legal education system.

• The governing council of the Section of Legal Education and Admissions to the Bar amend or eliminate accreditation standards that increase costs or impede innovation without contributing to the goal of ensuring that law schools deliver a high-quality education.

• U.S. News & World Report stop using law school expenditures to help compile its annual law school rankings, and make sure its ranking methodology does not promote conduct damaging to the interest of students or the legal education system.

ABA President James R. Silkenat praises the task force for tackling such a complex and nuanced subject in a productive and sophisticated way, saying lawyers must work together to “ensure that the system remains strong and viable to meet the evolving needs of our clients and society in a changing, globalized world.”

He says, “The American Bar Association looks forward to encouraging discussion, debate and, where consensus emerges, action on the task force’s thoughtful and diligently developed recommendations.”

In fact, Silkenat has already taken action to implement the task force’s first recommendation, asking the ABA Board of Governors to commission a new task force to conduct the detailed examination of law school financing issues. He says he hopes that effort will result in a “comprehensive and deep” study of the issues so that specific recommendations to address the situation can then be developed.

Kyle McEntee, co-founder and executive director of Law School Transparency, says the task force has done an admirable job of identifying some of the pressing issues facing legal education. But he bemoans the fact that it didn’t have the time or the resources to delve into those issues any deeper.

“They kind of kicked the can down the road,” he says. 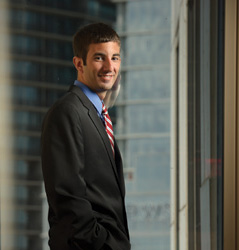 Kyle McEntee: “Policy changes need to happen in Congress, the states and the legal ed section.” Photo by Michael Schwarz.

NO TIME TO WASTE

McEntee applauds Silkenat’s move to create a new task force and says that effort, which he volunteered to be part of, couldn’t begin soon enough.

“It’s really essential that they do this,” he says. “And it needs to be done quickly.”

McEntee isn’t bothered that the task force didn’t end up proposing any policy changes to the House. He says those changes need to happen in Congress, which oversees student loan programs; the states, which are responsible for bar admission policies; and the ABA’s legal education section, which administers the law school accreditation standards.

Philadelphia professional responsibility lawyer Lawrence J. Fox, one of the Section of Litigation’s delegates to the House, says he was glad to see the task force had toned down the “vituperative nature” of its draft report.

Fox had been highly critical of the draft report, which he called a “cure worse than the disease,” and whose approach he said was “far from the sophisticated, analytical and realistic call for reform” that he had expected from such an august group.

But he says the final report still contains many of the bad ideas the draft report did, such as eliminating the requirement of an undergraduate degree for admission to law school, reducing the law school program from three to two years, and allowing nonlawyers to engage in the practice of law.

“I’m glad to see that they’re taking a more diplomatic approach,” he says, “but I still don’t think they’ve come up with a solution that will satisfy the ultimate consumer, which is not the student but the client.”

Fox says he’s happy to hear the task force would not be bringing any specific proposals before the House, adding that would have been “very divisive” and “nonconstructive.” But he also wonders aloud whether the task force believes its recommendations are “self-executing.”

Barry Currier, the ABA’s managing director of accreditation and legal education, has declined to comment on the task force’s final report. But he says the section’s governing council will seriously consider its recommendations as part of the council’s ongoing comprehensive review of accreditation standards. The final report of the ABA’s Task Force on the Future of Legal Education should come as no surprise to anyone familiar with the task force’s previous work. The main difference is what it plans to do with the study. “Respectable task forces go out and try to get their ideas implemented. And that’s what we intend to spend the rest of our time doing.”

This article originally appeared in the March 2014 issue of the ABA Journal with this headline: “Legal ed under the gun: Task force to lobby for change in law school programs.”