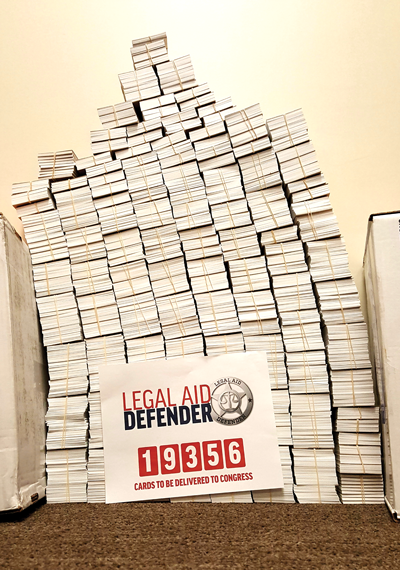 When President Donald Trump proposed a budget in March that would eliminate funding to the Legal Services Corp., the nation’s largest provider of civil legal aid services, the American Bar Association was ready.

Rumors had been swirling since January that the nonprofit was at risk of being defunded, and under the guidance of ABA President Linda A. Klein, the Governmental Affairs Office had been hard at work developing a strong response.

“Establishing justice is a founding principle of our nation and should not be denied because a person can’t afford basic representation in civil matters, such as housing, domestic violence and veterans’ needs,” Klein says. “Support for the Legal Services Corp. is bipartisan because guaranteeing representation to all is not a political issue but an issue of fairness. It benefits every congressional district and returns far more on every dollar spent than it costs.”

The day after Trump announced his proposed budget cuts, the ABA launched DefendLegalAid.org as part of a major social media campaign to save the LSC. Visitors to the site were asked to express in their own words why they support the LSC’s mission and to identify their state and the member of the U.S. House who represents them. Their personal messages were printed and taken to Capitol Hill during ABA Day 2017, the annual lobbying event in Washington, D.C., April 25-27.

Messages were hand-delivered by ABA staff and the state delegations so that congressional members received comments from their own constituents. More than 6,000 people signed up as Legal Aid Defenders on the ABA’s site, and more than 19,000 personal messages were delivered to representatives and senators.

People who sign up as Legal Aid Defenders are added to the ABA’s Grassroots Action Team. This database allows the ABA to send out action alerts when an important vote or other development in Congress becomes imminent, giving instructions on how individuals can help. Focus is given to federal issues so as not to impede state bar efforts.

The ABA’s campaign was not limited to DefendLegalAid.org. Videos and graphics highlighting the fact that the LSC provides legal services for 1.9 million low-income Americans—while only requiring 1/10,000th of the federal budget—were rolled out through ABA Twitter and Facebook channels.

For those looking for additional ways to improve access to justice and support legal aid, the ABA Standing Committee on Legal Aid and Indigent Defendants has created the HelpLegalAid.org webpage.

At the ABA Techshow 2017 in March, Avvo CEO Mark Britton, Rocket Lawyer CEO Charley Moore and LegalZoom CEO John Suh, keynote speakers at the event, promised to use their resources to promote the LSC and access to legal aid. Klein used the opportunity of her Techshow plenary session to say that this was a defining moment for the legal profession, and everyone should be fighting to preserve legal aid funding.

“The ABA and President Linda Klein are doing a wonderful job of shining a spotlight on the importance of funding for the LSC and on the role of civil legal aid in our justice system,” says James J. Sandman, who has been president of the LSC since 2011.

And the ABA is not alone in coming to the defense of the LSC. The heads of more than 150 U.S. law firms had written to the Trump administration, even before the budget was proposed, urging the president to fully fund the LSC.

“The pro bono activity facilitated by LSC funding is exactly the kind of public-private partnership the government should encourage, not eliminate,” the law firm heads wrote.

The deans of 166 law schools and the general counsels from 185 companies wrote letters to Congress asking that the LSC’s funding be preserved and even increased. Justices from at least two state supreme courts have also publicly asked their congressional delegations to oppose the cuts.

“It is inspiring to see thousands of lawyers, law students and others defending the Legal Services Corp. and standing up for millions of people who rely on legal aid every year,” Klein says. “This incredible constituent support for the LSC demonstrates the need for members of Congress to continue their bipartisan support of this vital program. Our justice system depends on it.”

This article originally appeared in the June 2017 issue of the ABA Journal with the headline "The Fight for Legal Services: The ABA takes several approaches to helping the LSC program survive."