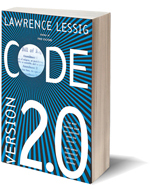 Some tasks get easier when everybody pitches in. Apparently, revising a book just isn’t one of them.

Stanford University law professor Lawrence Lessig learned this lesson after posting his 1999 classic on Inter­net regulation, Code and Other Laws of Cyberspace, as a wiki and inviting contributions. He released Code v2 in 2006 as the first popular book ever to be revised online by readers.

“I don’t think I’ll ever write a book that way again,” he confesses. “It’s very, very hard. It’s much harder to write a book with collaborative editing than it is just to write the book.”

One of his biggest fears—it proved unfounded—was that copyrighted material posted by someone with an ax to grind would appear in the final version. Chapter “captains” guarded against that possibility and removed factual errors. In 2005, he downloaded the wiki text to use as his draft.

A close reading of Code v2 reveals his editing, with smoother sentences and sharper word choices. One also detects Lessig’s growing concern about government, which ultimately led him to set aside the cyberlaw issues that had defined his career to focus on fighting political corruption.

The book’s structure and ar­gument are the same, he wrote in his second preface, “but I’ve changed the framing of particular examples—and, I hope, the clarity of the writing.” Did the book improve? “I don’t know,” Lessig says.

Next:
A Prescription for Silence