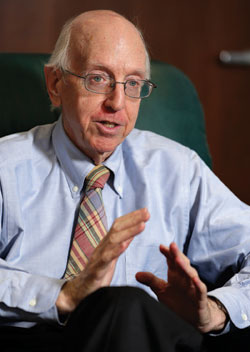 Photograph of Judge Richard A. Posner by Reuters/John Gress

Regarding “An Interview with Judge Richard A. Posner,” July: In my opinion, in some of Judge Posner’s body of work there are pieces in which he comes across as a consummate ass. No question about it. But one can see a first-class mind at work here. And it is clear that he is willing to learn more than he knew before and apply newly found wisdom accordingly, without any suggestion of his ego getting in the way and preventing him from acknowledging that his thinking has evolved.

A lot of good stuff in here, and there would have been more if the interviewer had stopped harping on the Scalia thing, which as Posner suggested nicely several times is not all that interesting or important.

I appreciate Posner’s distaste for the Bluebook, something so mundane and yet so relevant to law practice. Guided by his insights and comparing it to the Chicago or “Maroonbook,” the more clear it became to me that the Bluebook is a kind of encryption system. It tells you to use citations like “Yale J.L. & Lib.,” but in the rare event you encountered that, the only way you could figure it out (before Google, anyway) would be to feed it back into the Bluebook to generate the original unencrypted name of the source (which has nothing to do with the Junior League or libraries, but is the Yale Journal of Law and Liberation).

That’s just one tiny area of Posner’s take on the world that captivated me.

I was interested in the comments about the voter ID law because it shows the need for a proper record for review. Had the opponents of voter ID done a better job of exploring the factual basis for the “fraud” claims, they might have had a different outcome. It reminds me of all those cases that say that minorities are systematically excluded from juries, but when the appellate courts receive the record there is not even an indication in the transcript of the race or ethnicity of jurors who have been excluded.

POWER TO THE SHE-HULK

After reading Issue 5, I decided I had to convert my fellow lawyers into She-Hulk fans. Thank you for beating me to it. (“Saving the World—One Lawsuit at a Time,” July.)

Let me fangirl for a bit about how she is drawn: Yes, she is beautiful and has an amazing body, but the current She-Hulk doesn’t dress or pose like some 15-year-old boy’s fantasy pinup. She wears tailored suits in court, hangs around with her friends in casual clothing that fits, and does not find herself contorted into arch-backed poses where she juts out her nether parts, breasts and rippling abs while wrestling another long-haired, scantily clad superheroine. In a pudding factory.

Oh yeah, and that ridiculously expensive conference room table? She-Hulk broke it in two with the touch of a finger!