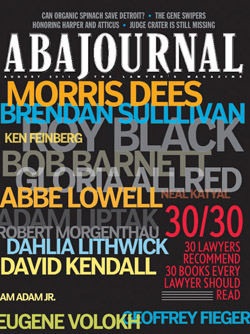 Whenever someone tells me they are thinking about going to law school, I give them a reading list. Every book I recommend is represented in “30/30,” August, save one: Bleak House by Charles Dickens.

The story of Jarndyce v. Jarndyce shows prospective lawyers the worst of the law. In the interest of full disclosure, it should be read.

Two books I recommend particularly to law students, as both educational and entertaining, are: Powers of Attorney by Louis Auchincloss, a small book of short stories that describe work in a big-city law firm during a much earlier period when the practice of law felt more like a profession; and The Honeywood File/Settlement by H.B. Creswell, about the communications among the owner, builder, architect and supply vendors of a new house under construction, which is delightfully organized very much like a pre-litigation file that a young associate would work on, with perceptive annotations critiquing the inadvertent mistakes laymen can fall into when talking to each other about the business they do together.

A book I recently found while living in New Zealand is one I think every lawyer should read. It is about justice not being served through a modern-day witch hunt, and it is an incredible analysis of how we jump to conclusions without knowing the facts when emotions take over, as they often do. It is a wonderful read, and I think it should be on the required reading list of every 1L class in the world. It is called A City Possessed by Lynley Hood. Rebecca Stahl
Tucson, Ariz.

It’s great to see that the world has not forgotten Ralph Ellison’s Invisible Man. I reread it about once every seven years. Unfortunately, my generation appears to be oblivious to this book’s existence.

Electronic Discovery and Digital Evidence: Cases and Materials by Shira Scheindlin and Daniel Capra. Buy it, read it.

This is for litigators especially, but almost as important for any lawyer handling electronically stored information—your firm’s, your clients’ or even your own. Forget trying to become competent with e-discovery CLEs alone; this book will teach you more in two hours than webinars provide in 100.

An honorable mention is due for Outrage: The Five Reasons Why O.J. Simpson Got Away with Murder by Vincent Bugliosi. Despite its age (and with a nod to the “civil trials are different” crowd), this review of the O.J. trial vividly describes evidence-handling blind spots and consequences—and foretells easily recognizable, similar shortcomings in today’s digital space. A great refresher on the risks of attorney hubris in the hands of a jury.

Everything by Alexander Solzhenitsyn so that we are reminded of the freedoms we have.

How Judges Think by Richard Posner was interesting.

How to Argue and Win Every Time by Gerry Spence, Convicting the Innocent by Brandon Garrett, The Confession by John Grisham, To Kill a Mockingbird—at least once each year.

A must-read (and probably never-read) for most lawyers and judges is The Making of the Constitution by Charles Warren.

First published by Little Brown in 1928 and reprinted in a more readable edition in 1993 by Rothman & Co., it is a day by day account of the Constitutional Convention of 1787. In addition to providing a treasure trove of information regarding the Constitution itself, it provides an insight into the spirit of compromise that resulted in that great document and that is so sadly lacking in the political discourses of our day.

Your introduction says, “This year, however, we thought we’d turn our view 180 degrees and observe the effects of literature on some of the lawyers we know.”

Not that the choices presented aren’t worthy, but when someone uses the term literature, I think of works that are more creative in nature than those about history, jurisprudence or social issues. A steady diet of case law and legal briefs tends to skew one’s reading choices. I didn’t realize this until I was a 2L, it was Xmas break and I was determined to read something not law-related. The Spouse and I went to the bookstore, where I bought seven books—all fiction. When we got out, the Spouse said: “You realize every one of the books you bought is about lawyers, or was written by a lawyer and has something to do with law, don’t you?”

Literature clearly forces us to use different parts of our brain than we normally do. It would have been more instructive to me to see 30 novels, books on essays or books on poetry that actually penetrated the muck that passes for these attorneys’ thought processes.

Thane Rosenbaum recommends Franz Kafka’s The Trial. It’s an excellent choice, but Rosenbaum misunderstands what the book is about. He says it is “a cautionary tale about the soul-crushing dimensions of the legal system.” The book has nothing to do with any legal system, not of Kafka’s Bohemia or Germany in 1914, and certainly not of the U.S.

The Trial is an allegory of the pathos and meaninglessness of human existence, in which human beings are all born guilty, are tried and tested in ways that they can’t comprehend and, ultimately, die “like dogs.” Nor is there anyone to provide solace or assistance, not the “lawyers,” who show “almost canine servility before the court,” nor the “priest,” who in fact works for “the court.”

Next:
Letting Them Be: ABA Takes a Hands-Off Stance Toward Lawyer Ranking Services