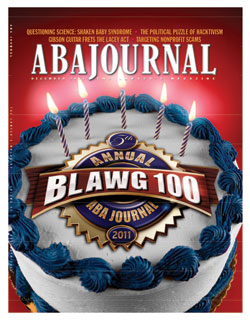 Thank you, Mark Hansen, for “Unsettling Science,” December, another educational look at an important and tragic subject.

Whether or not you believe that shaking without impact can cause the classic symptoms of shaken baby syndrome, I’ve seen enough cases of misdiagnoses to convince me that innocent people are going to prison in startling numbers on the basis of sincere but inaccurate medical testimony about infant shaking.

The most problematic element of the classic SBS model is the presumption of immediate symptoms, which allows the prosecution to identify a presumed perpetrator: whoever dialed 911. SBS experts insist that infants injured by head trauma will show symptoms immediately, even though doctors have for centuries recognized the lucid interval—the period of time after a fatal head injury when the patient appears to be fine, only to collapse hours later when the bleeding and swelling reach a critical point.

The evidence for immediate symptoms in infant head injury was absent in the past; accumulated experience now proves it false, as in the case autopsied by Dr. Robert Huntington III after the conviction of Audrey Edmunds.

Sometimes the diagnosis is made on the basis of only one or two elements of the triad, as in the case of Shirley Ree Smith, whose conviction was unfortunately reconfirmed by the U.S. Supreme Court in November. Regardless of the circumstances surrounding the event, the police, prosecutors and jury tend to believe the medical experts, and there’s not much a defendant can do to prove innocence.

Good luck to us all, as we try to unravel 30 years of bad science in the courtroom.

I feel vindicated by this trend in thinking. A prosecutor in the 1990s, I lost the support of police officers and was criticized in the press for not taking a more aggressive approach to these kinds of cases.

I was disappointed to read Hansen’s take on the data behind shaken baby syndrome. In portraying the manufactured debate over the existence of the condition, Hansen unfortunately glosses over the overwhelming scientific agreement about the existence of abusive head trauma in infants and children, and seeks to create the impression of legitimate scientific disagreement where little is present.

In many ways, the debate over these injuries mirrors another one: that over the purported association between vaccines and autism. An experienced reader of the popular media will notice that members of a small club of denialists appear to be quoted in every major article decrying the existence of shaken baby syndrome, and these individuals fail to produce peer-reviewed scientific data to back up their claims. Yet they are certainly successful in seducing many magazine and newspaper reporters to take up their cause. In fact, Hansen refers to this very analogy (vaccine denialism) in his article, mentions in passing that every major scientific organization (such as the American Academy of Pediatrics and National Association of Medical Examiners) sees no controversy, and fails to offer any legitimate alternate explanation for the death of 7-month-old Natalie Beard.

And yet, the article opens with the following rhetorical flourish in asking whether Natalie died of inflicted trauma: “You decide. We can’t. And neither, apparently, can the court or the scientific community.” This breathless tone continues throughout the piece. Like many clinical specialists who’ve taken care of traumatized children and are familiar with the medical science, I believe this kind of writing is intellectually dishonest.

The article on the possibility that science is (once again) convinced of a fact that is not a fact was interesting. First off, medical science has lagged broader knowledge by many decades many times in history. My favorite example is the doctors who spread puerperal fever because they rejected germ theory, killing thousands of women. (Animal births were not so afflicted—I suspect farmers knew all along there were some invisible agents involved in infection and washed their hands.) Farmers knew the facts of H. pylori causing ulcers long before doctors gave in and accepted it.

But the closing comment, “Babies don’t just die for no reason,” was indeed provocative. Of course, sadly, they do—see sudden infant death syndrome. SIDS is the unexplained death, usually during sleep, of a seemingly healthy baby.

Then, too, the “inventor” of SBS repudiated the easy-peasy triad in an interview with NPR last year. Dr. Norman Guthkelch said, “I don’t think that the famous triad, however well some people think it’s defined, can ever be so well-defined that you can say that and nothing else cause[s] it—‘that’ meaning shaking.” He also expressed concern over the number of cases similar to one he reviewed in Arizona in which he concluded that child likely died of natural causes, not SBS, and stated, “I think I used the expression in my report, ‘I wouldn’t hang a cat on the evidence of shaking, as presented.’ ”

My point being: Today’s medical certainty is tomorrow’s “Oh, sorry, we were wrong.” Not great news for innocents convicted.

VIGILANTE JUSTICE HAS ITS PLACE

Regarding “The Hacktivists,” December: i love a good revenge story! When our government won’t even investigate the possibility that those representing the same corporate interests that bought their elections have violated federal law, even after Anonymous put their plans out in the open for all to see, it becomes difficult to see the actions of Anonymous as anything less than heroic.

Vigilante justice is not my ideal, but if it’s the only justice that’s happening, it’s better than the alternative reality.