Letting Them Be: ABA Takes a Hands-Off Stance Toward Lawyer Ranking Services 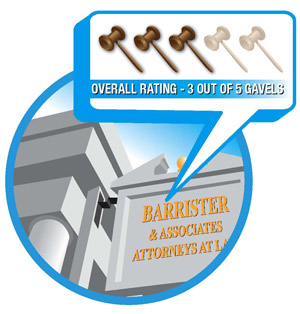 The ABA Commission on Ethics 20/20 has concluded that the logical policy for the association to take toward companies that rank law firms and lawyers is to pretty much just leave them alone.

And it appears that is what the ABA is going to do. The commission’s report (PDF), submitted to the House of Delegates in conjunction with the association’s 2011 annual meeting in August, was informational in nature, so it did not require action by the House. But there also were no rumblings to give the issue further attention, at least for now, even though the president of the state bar that originally called for the ABA to study the impact of ranking services suggested that the Ethics 20/20 Commission’s study could have been more comprehensive.

The commission’s look into lawyer ranking services stems from a resolution adopted by the House in February 2010 that directs the association to “examine any efforts to publish national, state, territorial and local rankings of law firms and law schools.” The resolution was sponsored by the New York State Bar Association. After the measure’s adoption, then-ABA President Carolyn B. Lamm directed the Section of Legal Education and Admissions to the Bar to study law school rankings and the Ethics 20/20 Commission to look at lawyer ranking services.

Lamm, a partner at White & Case in Washington, D.C., appointed the commission at the beginning of her term as ABA president in 2009 with the primary mission of studying the impact of technology and globalization on lawyer ethics and regulation.

In July 2010, a special committee of the legal education section, which is recognized by the U.S. Department of Education as the national accrediting body for law schools, issued a report recommending that the ABA essentially stand pat on the issue of law school rankings, which are dominated by U.S. News & World Report.

“We believe that, for better or worse, U.S. News rankings will continue for the foreseeable future to dominate public perceptions of how law schools compare, and that there is relatively little that leaders in legal education can do to change that in the short term,” the report states.

NO EVIDENCE OF HARM

The Ethics 20/20 commission’s report states that law firm rankings raise different issues, at least partly because there is no dominant rating service for lawyers. The report concludes that, in light of court rulings on free speech rights for advertising and ethics rules incorporating those rights, there isn’t enough evidence of a “pervasive problem” caused by lawyer rankings to justify further study by the ABA. Moreover, the report states, hiring the necessary experts to conduct a full in-depth study “would be prohibitively expensive.”

The report was drafted by a working group that engaged in extensive outreach with lawyers, bar associations, disciplinary agencies, consumer groups and ranking services. “We found no evidence that anyone has been caused any harm by this. That was very important to me,” says Roberta Cooper Ramo, a partner at Modrall Sperling in Albuquerque, N.M., who is one of the working group’s co-chairs. Existing ethics rules already govern situations in which lawyers might improperly share information with ranking services or improperly use rankings in their advertising, she notes.

(The other co-chair of the working group is Donald B. Hilliker, who is of counsel in the Chicago office of McDermott Will & Emery.)

New York State Bar President Vincent E. Doyle expressed disappointment with both ABA reports. In an interview with the ABA Journal during the annual meeting, Doyle said rankings have a negative impact on both law schools and law firms. While the New York bar has no immediate plans to revive the law firm ranking issue, said Doyle, a partner at Connors & Villardo in Buffalo, he kept open the possibility of raising it again at the 2012 ABA Annual Meeting, when the Ethics 20/20 Commission’s recommendations will come before the House.