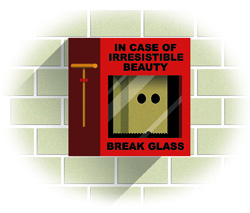 While few might remember an early ’90s band known as Right Said Fred, many will remember its signature tune, titled “I’m Too Sexy,” wherein the singer asserts that he’s too sexy for his love, for his shirt and for his car, among other things. It’s intentionally ridiculous and campy, but really, are there situations in which one can be too sexy? How about school? Not a good idea, especially with all-too-frequent reports of “extracurricular” activity between faculty and students. Church? Also a definite no-no.

In late December, the Iowa Supreme Court added to the list.

Ruling unanimously, the all-male court gave the state’s bosses the go-ahead to fire any employee whom they view as an “irresistible attraction.” The ruling stemmed from a case brought by a woman who worked for a Fort Dodge dentist for 10 years before losing her job for being too attractive.

Melissa Nelson was fresh out of community college in 1999 when Dr. James Knight hired her to be his dental assistant. According to Nelson’s complaint—filed in August 2010 in Iowa District Court—Knight acknowledges that she performed her duties well, and Nelson says that Knight was a good person and treated her respectfully.

So what’s the basis for the lawsuit? Nelson claimed that during the last 18 months or so of her employment, Knight began making suggestive comments about her clothing, and about her sex life. She denied that her attire was inappropriate. Eventually the two began exchanging text messages—both work-related and of a personal nature—after office hours.

In 2009, Knight’s wife became aware of the texting and demanded that Nelson be terminated because she viewed her as a threat to their marriage. Knight complied.

Nelson, who is also married, claimed gender discrimination because, according to the complaint, she “did not do anything to get herself fired except exist as a female.” Knight’s response was that he had to let her go because of the problem her presence created with his marriage. The state supreme court upheld the district court’s dismissal of the case, explaining that the impetus for the firing was Knight’s attraction to Nelson, not strictly the fact that she is a woman. The high court also noted that Nelson was replaced with another woman.

So, apparently, despite the fact that you meet all of your job requirements and perform your duties responsibly, you can be out on your keister because your boss can’t help making googly eyes at you.

Fair? Well, it’s always been acknowledged—secretly, at least—that attractive people have an unfair advantage in the workplace. Maybe the pendulum is finally swinging the other way and giving the cosmetically gifted a chance to find out what life is like for the cosmetically challenged.

But whether the cosmos has it in for the toothsome is beside the point for Nelson. She has a family to help support and has reportedly been working six days a week as a waitress to pay the bills. Now, if she can just manage to carry plates and trays, pour coffee and mop up spills without looking too appealing, she should be fine.