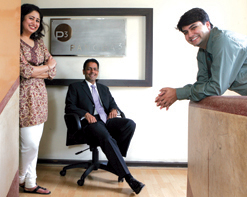 It is 10:30 in the morning in Mumbai—1 a.m. in New York City—and Aditi Tulpule settles between the partitions of her computer station, one of many such workspaces along an extended blond-wood desk.

Tulpule, 32, has two law degrees: one from one of India’s top law schools and a graduate law degree from a school in Great Britain. She is licensed to practice law in both countries and has five years of cor­porate law experience behind her.

She’ll spend her day abstracting leases, reviewing documents, drafting contracts, then sending her work ­­product to private law firms and in-house legal departments based in the United States, where the work originated—and where American lawyers will put their names on the documents she creates.

American lawyers believe the work Tulpule does is not cost-effective for them to handle personally. When Tulpule does it, she charges an hour­ly rate about 80-90 percent less than what Americans do. That’s because she’s among the 100 or so lawyers who work in the Mumbai office of Pangea3, one of India’s rising stars in a growing industry called legal process outsourcing, or simply LPO.

It’s a job Tulpule says she loves. She appreciates the “excellent exposure” to mostly Fortune 500 companies, to experts in the field. She earns a competitive salary, and the dress code is liberal enough to include everything from tailored suits and smart separates to a more traditional kurta-over-pants look. There’s even a certain amount of status attached to the position: When she first told her friends she was signing on with the outsourcing shop last year, they thought it was cool.

Pangea3’s expansive, bullpen-style office space sprawls across the third floor of the Eros Building, a pink Art Deco building that sits at one of Mumbai’s busiest junctions. Lawyers take their places at the communal desks around 10:30 in the morning and stay as late as 10:30 at night. These late hours offer the best opportunities for real-time communication with clients, most of whom are just starting their workdays on the other side of the world.

Today Tulpule will find out when she’ll be interviewing with one of Pangea3’s American clients. The client wants to bring two Pangea3 lawyers to New York City for six months to give them a greater understanding of the client’s needs and its corporate culture. It’s not the first time a Pangea3 lawyer assigned to a particular client team has traveled to the client’s home office for training, but it will be the first stint to last this long—the usual time frame is just a few weeks.

The client has already interviewed several Pangea3 lawyers, but so far none has made the cut. Supervisor Poonam Vasudeva says she is not sure why, but she still has an answer at the ready when some of the unchosen interviewees stop by her desk with beseeching questions. “The client liked parts of each of you,” she tells them. “They are looking for one person who has all those parts.”

It’s the type of smooth response only a seasoned lawyer could give, and Vasudeva’s mining about 15 years of legal experience in various litigation, commercial law and management-oriented lawyer jobs around India.

Vasudeva became Pangea3’s corporate director two years ago. Back then, she knew the names of everyone working inside the office’s acid green and royal blue walls. Now, she admits there are just too many new faces. And more arriving every day.

The first instance of legal work being outsourced to India took place in 1995, says Rahul Jindal, a prominent LPO blogger. It started gaining steam after 2000, and Jindal estimates that there are about 100 legal outsourcing companies that employ between 600 and 800 Indian attorneys.

While that number is still a tiny percentage of India’s legal sector, which is estimated to have 80,000 new law graduates every year, it can only increase based on estimates of how big outsourcing is expected to become. Exact figures are hard to pin down, but an oft-quoted figure puts the current value of these offshore services in India at $80 million per year, with the expectation that it will reach $4 billion by 2015.

Pangea3 had 12 lawyers when it started in 2004, says Sanjay Kamlani, a co-founder and co-CEO. Today, there are about 100 lawyers servicing more than 150 clients, more than 25 of which are Fortune 500 companies. Kamlani won’t name names; he says Pangea3’s clients are skittish about acknowledging their use of LPOs. But it’s been reported that Yahoo, Roamware Inc. and Trico Marine Services are among Pangea3’s clients.

The projects that Pangea3’s lawyers work on are time-consuming and laborious: patent drafting, contract drafting, document review, corporate secretary work, legal research and writing, contract management and corporate due diligence. Like many of its competitors, Pangea3 has offices in the U.S.—in New York City and San Jose, Calif.—to lead the client-development charge. But Kamlani says plenty of clients interested in outsourcing end up finding Pangea3 on their own.

Pangea3’s more junior lawyers rare­ly bring in new clients. Their job descriptions don’t include rainmaking requirements, says Kamlani, but they are encouraged to “upsell” cli­ents on using more of Pangea3’s ser­vices. They are also encouraged to develop close relationships with their clients, to get to know them as people.

Despite the distance, these relationships often occur organically, a natural byproduct of lawyers working closely with other lawyers.

“They tell us about their families, their relationships,” says Vasudeva. “It builds a lot of trust and faith, opens up channels to where even if there’s a problem I can pick up the phone and talk to them. Many cli­ents are giving us insight into their business—why they’re doing what they do. The lawyers talk about these things to us. It’s like how they would treat someone who works in the same building rather than just sending something into a black hole.”

Lunchtime at pangea3 has a wonderful smell—curries, stews and len­til-flour pancakes filled with spicy potatoes are being eaten around the office. Food is brought from home, or brought in from outside restaurants, then transferred to ceramic plates and served by staffers sporting royal blue golf shirts.

These same royal blue-shirted staffers also supply coffee throughout the day, filling and refilling the royal blue mugs at the long, blond desks. “I’m told in Ameri­can law firms you don’t have people to bring you coffee like we do here,” Vasu­deva observes. “Labor is very cheap in India.”

Most lawyers eat at their desks, so as not to interrupt the work at hand. For one, that’s a worldwide survey of certain technology regulations; for another, it’s a review of documents for a real estate transaction. Some 60 lawyers are tasked with a single document review for a patent suit.

Kamlani, Tulpule and Abhijit Mone —another lawyer who works for Pan­gea3—are having lunch at one of their favorite haunts: Starters & More, a restaurant in the Eros Building that also hosts salsa dancing and a weekly jazz night. A large group of tourists is also sitting down to eat.

Tulpule says it wasn’t the money that attracted her to the job. She won’t divulge how much she makes, but she does call her salary “very competitive” and “on par” with market rates.

Pangea3 also supplements her sal­ary with stock options, which allow her to earn a lot more depending on how she performs. All lawyers starting with the company get them, and then each year they’re rewarded with more depending in part on the quality and substance of their work, their initiative to take on responsibility, whether they mentored more junior lawyers, how well they were able to manage their client relationships, and whether they were able to generate new business from those client relationships.

While it means Tulpule and her colleagues can generally count on earning more than their base salaries, the legal field in general isn’t as remunerative in India as it is in the U.S. and other Western countries. Indian lawyers earn about half of what doctors and engineers do. A newly minted J.D. from a top 10 school in India can expect to earn about $6,000 to $7,000 a year, Kamlani says.

While this sounds alarming in com­parison with the $160,000 per year earned by some of their Ameri­can counterparts, it does translate to an annual purchasing power of $30,000-$35,000. And that goes far in a country where the average annual per capita income hovers around $500.

For Tulpule—and for Mone, too —the allure of outsourcing was the possibility of getting involved with a brand new industry. Legal outsourcing had just started catching on while she was in law school, and she says the idea of being part of something interesting and profitable in its earliest stages appealed to them.

Taking one of the two traditional career routes, private practice or in-house, would have been too mundane, Tulpule says. She envisioned toiling away for hours on end with nary a client conversation. Since many of the country’s law firms are family-owned, her opportunities for advancement would only extend so far.

Outsourcing, on the other hand, offered something else: an untested, entrepreneurial environment that’s proving attractive to fellow Gen Y grads. (Most of Pangea3’s lawyers are in their 20s and 30s.) In fact, joining an LPO outfit has become such a popular alternative that there’s even a new standardized exam for Indian lawyers who want to work in outsourcing. It’s called the Global Legal Professional Certification Test, and it measures a lawyer’s command of English, substantive law, lawyering skills and ethics—the skills thought to be necessary in this field. (Of course, where there’s an exam there are exam prep courses, and those have just started in India as well.)

Tulpule says she doesn’t mind the long hours, or even the shared-desk situation, which is common at firms located in cities where space is expensive. She enjoys working closely with the American lawyers who are her clients—talking on the phone regularly, being trained by them, getting brought in on more and more of their projects. “We’re their shadows,” Tulpule says. “We go to work when they go to bed. We’re their genies. We’re their geniuses!”

But she does see her work at Pan­gea3 as a stepping stone of sorts. To what, however, she is unsure. “As a corporate lawyer, this opens up a multitude of opportunities where experience such as this is in great demand—both in law firms abroad as well as, due to globalization, ‘traditional’ law firms in India,” she says.

And like lawyers the world over, she chooses her words carefully when asked to speak about where she sees her career going. “What I choose for myself,” she says, “will largely depend on which opportu­nity presents itself.”

It is time to go back to the office. Tulpule and Mone have to talk on the telephone with one of their clients, and Kamlani is negotiating a lease for office space to supplement the office in the Eros Building. Pangea3 has already hired 40 more lawyers and engineers who will start at this new office when they grad­uate in June.

Picture two fifth-year lawyers—one working for a law firm based in New York City, the other for a legal outsourcing company in Mumbai, India. Both lawyers are working on projects for Fortune 500 clients, yet under very different circumstances. Here’s an unscientific snapshot of just how different those circumstances might be.
ASSOCIATE PAY

India: Not expected to bring in new clients, but “upselling” existing clients on new services is encouraged.

Arin Greenwood is a lawyer and freelance writer based in Washington, D.C.