Marriage as a loophole—what’s love got to do with it? 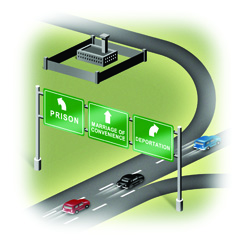 The gradual redefinition of what, exactly, constitutes a marriage in these United States is taking place before our very eyes, as both sides of the congressional aisle vow to give a chilly reception to anyone who isn’t wedded to the lawmakers’ views on the matter.

But regardless of one’s personal convictions—and despite the fact that the U.S. divorce rate stubbornly remains near 50 percent—most would probably agree that matrimony is not to be taken lightly. That’s why spouse wannabes state very clearly during the ceremony that they will love, honor and cherish each other (or some variation thereof) as long as they both shall live.

Many, however, choose to treat marriage not so much as a declaration of undying love but as more of a license to bend the purpose of the institution to fit a current legal need. Have a visa that’s about to expire and don’t want to go back to where you came from? Find someone to put a ring on your finger and get hitched. Want a fast track to U.S. citizenship? Same thing—the ring. It’s become such a common occurrence that it’s sometimes done en masse over the Internet.

For some people, though, that kind of thing is like amateur hour. They take it to a whole new level. Former high school teacher Leah Gayle Shipman was facing 15 years in prison for statutory rape after being arrested in 2010 for having sex with a 15-year-old male student. In December, when the case ended with Shipman pleading guilty only to resisting arrest, it came to light that she had been able to make that whole statutory rape thing go away by simply marrying the victim, with his mother’s consent. The spousal privilege was invoked and—poof!—the case against her vaporized.

A besieged small-town mayor in Massachusetts seems to be hoping that a matrimonial maneuver might get him out of his legal quagmire as well. William “Willie” Lantigua became mayor of Lawrence in 2010 and is currently under suspicion of numerous no-nos, including bid-rigging, unexplained out-of-state travel, illegal swapping of city-owned vehicles and campaign finance violations.

In mid-2012, a city hall secretary—Lorenza Ortega—went before a grand jury that was considering numerous charges against the mayor. By August, it had been reported that Lantigua and Ortega had tied the knot, even though he had not publicly announced a divorce from his wife, Mayra. Speculation immediately centered on the fact that if the reports were true, then Lantigua’s new wife—who would be a key witness for the prosecution if charges were brought—could invoke the, you guessed it, spousal privilege and dry up much of the case against him.

Lantigua has announced his intention to seek re-election, and opponents have announced their intention to initiate a second recall campaign if he succeeds.

Given the cold, calculated ways in which marriage can be co-opted for legal advantage, perhaps the main consideration shouldn’t necessarily be whether a couple’s chromosomes are XX and XY, but whether their main motivation is XOXO.