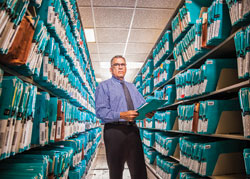 Carlos Martinez: “My hope is not just for my office,” Martinez says. “My hope is there’s been a serious shock to the system that’s been necessary for many years—that is, we need to be looking at what we’re doing in court every day.” Photo by Sonya Revell.

In 2008, the Miami-Dade County public defender’s office was in crisis mode. The average assistant public defender was handling 400 felony cases at a time and experienced attorneys were juggling 50 third-degree felony trials a week. Defendants suffered, attorneys were struggling, and as a last resort the PDs turned to the courts for relief.

“It was a cry for help from a system that was absolutely overwhelmed at the same time we were experiencing tremendous budget cuts,” says Miami-Dade County Public Defender Carlos J. Martinez. “It was an untenable situation for everyone. The judges recognized it and the judges saw it. … Our clients were facing serious consequences from not having the representation they were entitled to have.”

In May the Florida Supreme Court ruled in favor of the office in Public Defender, Eleventh Judicial Circuit of Florida v. State of Florida, allowing PDs to refuse new cases if their workload precludes them from providing defendants with adequate representation.

“We are struck by the breadth and depth of the evidence of how the excessive caseload has impacted the public defender’s representation of indigent defendants,” the court said, overturning an appellate decision. The supreme court pointed to evidence showing that attorneys were routinely and systematically “unable to interview clients, conduct investigations, take depositions, prepare mitigation or counsel clients about pleas offered at arraignment.”

The case has been remanded to the trial court to determine whether the office remains deluged and is entitled to the relief originally sought.

“In a lot of those cases there was no opportunity for defense counsel to investigate, to prepare mitigation, to do research, absolutely nothing,” Martinez says. Attorneys focused on in-custody defendants and those facing the most serious charges, often to the detriment of other clients. “Triage is not acceptable for defense representations,” he says. “In that process, the weak perish—and the weak are the defendants.”

Heavy caseloads are not a novelty for public defenders. What’s happening in Miami is occurring in criminal courts across the country that are overwhelmed by too many cases, too few judges and underfunded offices. Nor do indigent defendants have a huge lobby in the state halls or in Washington, leaving the system unbalanced, says attorney Pauline Weaver, a former assistant public defender and co-chair of the ABA Criminal Justice Section’s Defense Function Committee.

“I think public defenders everywhere really want to do the best job for their clients. They don’t want to cut corners or seem less effective than private counsel, and they’re not,” says Weaver, who worked as an assistant public defender in Alameda County for 29 years before opening her own practice in Fremont, Calif., in 2011. “They’re some of the finest lawyers in this country and they’re not given the kudos they deserve.”

“It’s just extraordinarily important that public defense is done right,” says Parker Thomson, an attorney with the Miami office of Hogan Lovells who with another firm partner, Julie Nevins, represented the PD’s office pro bono. “But it is so burdened that it can’t be done right. So the guarantees of effective counsel are meaningless. We think [the Miami case] is a landmark decision, and we hope it is treated as such throughout the country.”

Shortly after taking the case, Thomson and Nevins filed motions to decline future appointments on new third-degree felony cases in each of Miami-Dade’s 21 criminal districts. The trial court consolidated the cases and ruled in favor of the PD’s office, approving the request to assign new noncapital felony cases to the state’s Office of Criminal Conflict and Civil Regional Counsel.

The Miami-Dade Office of the State Attorney, which challenged the original motion, appealed the decision, and an intermediate court reversed. By the time Florida’s highest court considered the evidence, the record of testimony, documents, statistics and expert opinions filled 26 volumes.

According to State Attorney Katherine Fernandez Rundle, her office “goes beyond just prosecuting individuals charged with committing crimes.” The state attorney also protects an accused’s right to a fair trial and ensures that defendants are “represented by constitutionally competent counsel while protecting the constitutional rights of crime victims,” Rundle said in a statement to the ABA Journal.

Public defenders’ initial attempt to withdraw from representation of all indigent defendants charged with noncapital felonies “would have created chaos in our criminal court system,” Rundle added, saying that the “trial court recognized the overreaching of the public defenders’ request and limited the relief to withdraw from only third-degree felonies.”

Rundle acknowledged that financial hardships affect all criminal court offices, but said she believes “circumstances today have dramatically changed” since the litigation was filed in 2008. Crime has decreased, and the Office of Criminal Conflict and Civil Regional Counsel, which provides legal aid to the indigent, is in full operation.

Rundle said the state high court “merely clarified the manner by which the Florida statute regarding withdrawal from cases should be implemented and returned the litigation back to the trial court for further proceedings.”

The National District Attorneys Association filed an amicus brief in the case, claiming that without a full and diligent caseload assessment, the court couldn’t determine whether the PD’s office was overburdened.

“What is troublesome about the Florida case is you have the public defender’s office saying, ‘We’re too busy,’ ” says Scott Burns, executive director of the NDAA. “What does that mean?”

“There has to be a caseload assessment of the entire office,” he says. “I think any prosecutor or public defender can say, ‘I can’t take any more cases; I’m overburdened.’ Prosecutors don’t have the luxury of petitioning the court and saying, ‘Gee, sorry, we’re not going to prosecute cases anymore because we’re just too overburdened.’ ”

Others also warn about the continued lack of state funds. “The situation that confronted the Miami public defender’s office in 2008-2009 was an astronomical number of cases,” says Norman Lefstein, a former prosecutor and public defender, and dean emeritus at Indiana University’s Robert H. McKinney School of Law. “It’s so important because this is precisely the predicament public defenders are in across much of the country, but too often they don’t challenge the caseload in the way they should.”

The Miami case may have opened a door for more public defender challenges nationwide. Experts are calling the decision the most significant reaffirmation of a defendant’s right to counsel since the U.S. Supreme Court extended the Sixth Amendment guarantee to state felony cases in 1963’s Gideon v. Wainwright.

But 50 years after Gideon, critics warn that the nation’s indigent defense system is in dire condition. Lefstein has written extensively about public defender’s office reform and was an expert witness in the Miami case. He says funding appropriations don’t keep up with caseloads, and it’s unrealistic to rely exclusively on public defender’s offices to deal with criminal cases.

“Overall, what we have seen in the U.S. during the past three-plus decades is substantial growth in the number and size of public defender programs,” Lefstein says, “but these programs have not kept pace with the need for defense services.”

So far, Miami-Dade County and Missouri are the most high-profile jurisdictions to successfully sue to cap case assignments, but efforts are underway elsewhere. Michigan recently passed statewide indigent defense reform legislation on the heels of an American Civil Liberties Union lawsuit, and five counties in New York have mounted a class action lawsuit challenging the state’s failed indigent defense system.

“My hope is not just for my office,” Martinez says. “My hope is there’s been a serious shock to the system that’s been necessary for many years—that is, we need to be looking at what we’re doing in court every day.”