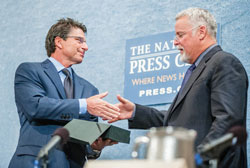 Michael Connelly was a highly successful author long before he started writing about lawyers. His 1998 novel Blood Work was named one of the best books of that year by the Los Angeles Times before it became a Clint Eastwood movie. And by the time he introduced Mickey Haller in The Lincoln Lawyer, he’d already produced 11 of his 17 police procedurals starring the fictional detective Hieronymus “Harry” Bosch.

“I’d always intended to write a legal thriller. I was really drawn to that genre, but I’m not a lawyer. And, honestly, I was kind of intimidated by it,” Connelly says. He is intimidated no more. In September, Connelly received the second annual Harper Lee Prize for Legal Fiction for The Fifth Witness, his fourth Haller novel. The prize is sponsored by the University of Alabama Law School and the ABA Journal. And in the audience at the National Press Club presentation were Roger Mills and Daniel F. Daly, two very real Florida lawyers he credits with schooling him on the sometimes grimy business of keeping a defense practice afloat.

Haller grew from a “weird moment of serendipity,” Connelly says. At a Los Angeles Dodgers baseball game in 2000, he found himself sitting next to David Ogden, a highly successful defense lawyer who ran his practice from the back seat of his car. Ogden (since retired) outlined for him in great detail how he used cellphones, battery-driven fax machines and a driver working off his legal fees to create a rolling law practice that gave the illusion of satellite offices located Los Angeles County-wide.

Ogden’s tale still lingered after Connelly moved his family to Florida. There he hooked up with Daly, a former roommate, who was now a lawyer. Daly and Mills began helping Connelly with his legal research. Connelly, a veteran police reporter, says much of what he learned about the law came outside the courtroom.

“There are a couple of bars where lawyers hang out after court,” says Connelly, “and one of my best resources is hearing their stories after a glass of bourbon or two.”

Connelly is reluctant to compare his novel with Harper Lee’s classic To Kill a Mockingbird, but he describes Haller as a “ponytailed Atticus Finch.”

“He’s a little seamy on the edges, but he’s a lawyer who will do what he needs to do to assure justice for his client—even at great risk to himself or his family,” Connelly says. Both feel an obligation to the innocent. But where Finch is driven by personal rectitude, Haller simply fears failure. Like most lawyers, Haller finds that innocent clients are too few and far between.

Connelly says it’s one of the insights he learned during one of those late-night drinking sessions. Though he seldom takes notes during those conversations, something Daly said found its way onto a cocktail napkin. The line became the opening of The Lincoln Lawyer: “There is no client as scary as an innocent man.”