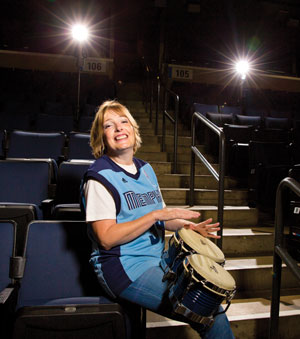 Among Memphis Grizzlies fans, she’s known simply by the name emblazoned on the back of her commemorative team jersey: Bongo Lady.

For the past three NBA seasons, when the first chords of Gloria Estefan’s 1985 hit song “Conga” pierce the air at Grizzlies games at the FedEx Forum, Meacham has faithfully leaped from her seat to move, groove and smack down on the cartoon bongo drums that appear in front of her on the arena’s Jumbotron.

With every arm flail, Meacham drums up a bit of bonus drama: mortifying her teenage son who sits, looking miserable, in the seat next to her. Once, he even covered his head with a brown paper bag. Although it lasts only a few seconds each game, it’s a shtick that’s become so popular that she (along with her son and daughter) has appeared on Good Morning America and ESPN, won a “Fan of the Year” award from NBA TV’s The Starters, and even was profiled in the New York Times. 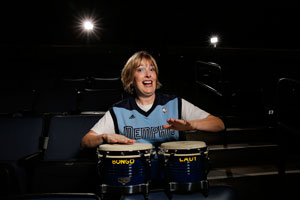 Q. Has being Bongo Lady affected your practice?

A. No. Being from a suburb of Memphis, some people don’t even know about it, and no one knows who I am at the games. I am just Bongo Lady. When I got NBA Fan of the Year, my name came out, but it’s been fine. It’s kind of nice for the public to know that lawyers and judges are people too, and we can be fun people.

Q. How did it start?

A. At the games, they have the Dance Cam and the Kiss Cam, and one night they started the Bongo Cam. I thought, ‘That’s fun and different!’ My daughter had forbidden me from doing the Dance Cam, so when this one came on, I saw it as an opportunity.

Q. Watching you go crazy playing the bongos is funny, but I have to say, watching your son recoiling in horror is even funnier. Do you think that’s part of your popularity with the fans?

A. Every parent and child can relate to this because when your kids become teenagers, all you have to do is breathe and you embarrass them. If you Google the phrase “Mom, you’re embarrassing me,” we are one of the first things that come up! But I told him, “You’ve gotten to go to New York City because of Bongo Lady, and you’ve been on NBA TV and on ESPN—all because of being embarrassed by your mom.”

Q. I heard that the players are Bongo Lady fans, too.

A. Yes! At the Grizz Gala, Marc Gasol, the center for the Grizzlies, came and introduced me to his wife. Tony Allen calls Bongo Lady his “home girl.” If I am anywhere and there’s a team function where there’s a fan day, the players come over and give me a hug. The players can also be seen watching Bongo Cam during the game rather than paying attention in the team huddle.

Q. Do you ever practice your technique?

A. No—it’s all from the heart. It’s all in the moment. I like to “dance like no one is watching!”

Q. Do you have any prior air instrument experience?

A. I played air instruments with my friends in college, and I play air keyboards in the car. I love music. Before Bongo Lady came about, I had started DJing. I did some weddings and parties, and I DJ all the school dances. It’s one more notch in excelling at embarrassing my children.

Q. What does the future hold for Bongo Lady?

A. I don’t know. I am just enjoying the fame while it lasts. If people get tired of Bongo Lady, I will still be at Grizzlies games cheering loud and proud for my team.

Q. Would you participate in another cam?

A. No, not unless it’s an air instrument. 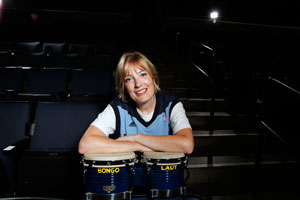 Q. So if the Grizzlies started, say, a sax cam—where you get to play an air saxophone—would you try something like that?

A. I would probably do that.

Q. You’d probably rock it, too!

A. I am a very intense person, whether it’s practicing law, parenting or playing air bongos. If it’s what I’m going to do, I’m going to fully embrace it.

See the Bongo Lady in action—start at the 1-minute mark.

This article originally appeared in the August 2015 issue of the ABA Journal with this headline: “’Mom, You’re Embarrassing Me!’ Mississippi lawyer and judge has become a national sensation playing the air bongos.”