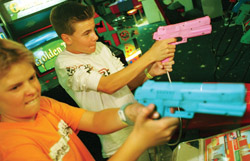 The California law aims to keep violent video games with "little or no redeeming social value" away from minors. (Photo by Getty Images)

To its opponents, a California law barring the sale of violent video games to minors is denounced as the latest example of “moral panic” over the perceived dangers of a relatively new form of media for children and adolescents.

In the late 1800s, crusaders blasted dime novels as “devil-traps for the young.” A 1907 Chicago Tribune editorial branded movies as “schools of crime” where murders, robberies and holdups portray an “outlaw life” that “tends to the encouragement of wickedness.”

In 1954, a Senate subcommittee considered the effects of comic books on juvenile delinquency, weighing whether Superman was “particularly injurious to the ethical development of children.”

“History teaches that every new form of media is met with concern that it will undo the youth of the nation,” says the U.S. Supreme Court brief on behalf of video game producers and merchants, whose First Amendment free-speech challenge to the California law is being weighed by the court. “Pulp novels, movies and the Internet have all been subject to similar attempts at censorship, complete with purported social science support.”

To backers of the California measure there has been at least one constitutionally significant development since those earlier eras. In 1968, the Supreme Court ruled in Ginsberg v. New York that states could restrict access for minors to materials that were protected speech for adults. In that case, at issue was minors’ access to sexually explicit materials—“girlie magazines,” as the court put it.

In its brief in Schwarzenegger v. Entertainment Merchants Association, which is scheduled for oral argument on Nov. 2, California declares that “violent video games, like sexual images, can be harmful to minors and have little or no redeeming social value for them.”

And to hammer home that this case is not about the quaint violence of dime novels and comic books, the state largely focuses on a single video game: Postal II, a 2003 release that often makes the lists of the most violent or controversial games.

“The violence in Postal II includes torturing images of young girls—setting them on fire and bashing their brains out with a shovel—for no reason other than to accumulate more points in the game,” the brief says.

The California law, passed in 2005 and not yet enforced, defines violent video games as those depicting “killing, maiming, dismembering or sexually assaulting an image of a human being” if the game appeals to “a deviant or morbid interest of minors,” is “patently offensive to prevailing standards in the community as to what is suitable for minors,” and, taken as a whole, lacks “serious literary, artistic, political or scientific value for minors.”

The state has not specified what games meet the definition, which borrows heavily from the high court’s obscenity jurisprudence. The law requires distributors to place an “18” label on violent games, and it bars retailers from selling or renting such games to anyone under 18, with civil penalties of up to $1,000 per violation.

The statute was challenged by the state merchants’ group as well as the Washington, D.C.-based Entertainment Software Association, which represents game producers. In 2009, a three-judge panel of the 9th U.S. Circuit Court of Appeals at San Francisco held unanimously that the law violates the First Amendment.

“Under strict scrutiny, the state has not produced substantial evidence that supports the legislature’s conclusion that violent video games cause psychological or neurological harm to minors,” the appeals court said.

The state appealed to the Supreme Court, whose decision to take the case surprised some legal analysts. Maureen E. Mahoney of the Washington, D.C., office of Latham & Watkins says many legal experts were “scratching their heads” when the justices granted review. It’s possible the justices just want to settle the question over extending Ginsberg to other areas of expression besides obscenity, she says.

“But these are children and the court has treated children’s First Amendment rights differently,” says Mahoney, a high court practitioner.

Zackery P. Morazzini, a deputy state attorney general who will argue California’s case, says the law is a modest regulation on a “commercial transaction.”

“We know that parents can’t always be there watching over their children,” he says. “There is a vast amount of [violent] material that children have access to. The state is entitled to say we’re going to step in and help parents in the upbringing of their children.”

Some of the state’s allies stress social science research that they insist shows that extended exposure to violent video games has harmful effects on minors.

“We see someone’s head cut off [in a video game], there’s a repulsion we feel,” says California state Sen. Leland Y. Yee, a Democrat from San Francisco who sponsored the state law. “When you see that hundreds of thousands of times, you become desensitized.”

Yee has filed an amicus brief that refers to the work of Craig A. Anderson, a psychology professor at Iowa State University whose research was cited by the state in the district court. A 2003 meta-analysis by Anderson and other researchers concluded that there was a significant correlation between exposure to violent media and aggressive behavior by children and adolescents.

The 9th Circuit was unswayed, concluding that Anderson’s research “has readily admitted flaws that undermine its support of the state’s interest in regulating video game sales and rentals to minors.”

Morazzini says, “The legislature used these studies for what they are. They show a correlation [between violent media and aggression], not causation.”

For their part, the video game and merchants’ groups stress that video games are like other forms of literature, incorporating plot, character development, dialogue and other elements that include “good-versus-evil, triumph over adversity, struggle against corrupt powers and quest for adventure.”

“If the court were to rule California’s way, there is a real risk of censorship of lots and lots of books and movies that at this point are not censored by the government,” says Paul M. Smith, a partner at Jenner & Block in Washington, D.C., who will argue the case for the industry groups. Many literary works aimed specifically at young people contain violent themes, from Hansel and Gretel to Lord of the Flies to the Harry Potter series, the groups’ brief notes.

Morazzini says the law is narrowly written to cover only violent video games “with no redeeming value.”

“Violence does have its place—look at Grimm’s Fairy Tales, The Iliad,” he says. “But why should offensive violence be treated any differently than offensive sex?”

“There’s been no demonstration that there is even a harm here that needs to be remedied,” says Kenneth L. Doroshow, general counsel of the Entertainment Soft ware Association. “The fact is the self-regulatory system is working.”

California notes that at the time the law was adopted, a Federal Trade Commission study showed that 69 percent of children were able to purchase games like Postal II without a parent. But the industry points to a 2009 FTC study, which showed that underage “mystery shoppers” seeking to buy those games were turned away 80 percent of the time.

Both sides submitted particular games into the court record, and both have provided the high court with DVDs showing samples of game action to help the justices see what the fuss is all about. California submitted five minutes of violent game action, while the industry submitted a disc with a more diverse array of action, including scenes from such games as Medal of Honor and Tom Clancy’s Rainbow Six 3.

Will the justices themselves be plugging in a Play Station or Xbox to try some of the games? In the 1960s and ’70s, when the court frequently heard obscenity cases, some justices and their clerks gathered on “movie days” to watch the sexually explicit films at issue. In the mid-1990s, when the court was reviewing a federal law that regulated Internet indecency, the Supreme Court Library set up a demonstration of the relatively new World Wide Web.

“It wouldn’t be shocking if they did a similar thing here,” Smith says.