JAG Corps captain's journey took him from Bushido to the bar 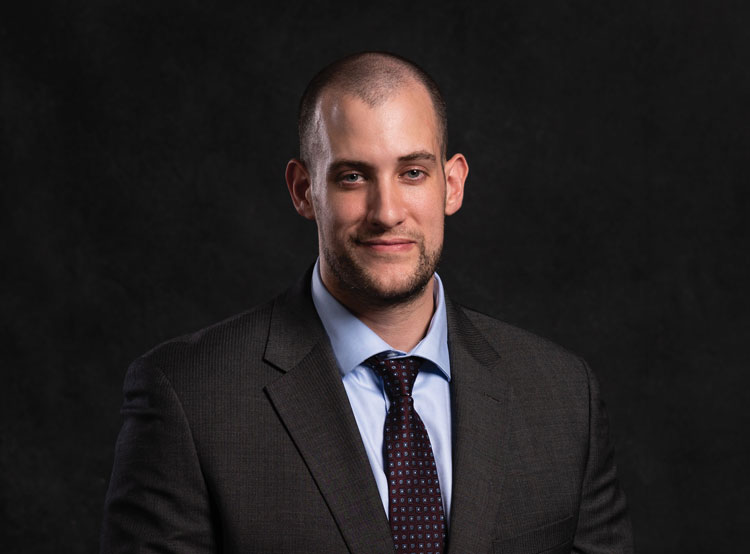 Shane Blank: “These distinctly Japanese principles, made famous as the unwritten moral code of the Tokkugawa-era samurai, became my compass.” Photo courtesy of Shane Blank.

My parents divorced when I was 11. Six years later, I came home on a Saturday afternoon to find my father dead from a heart attack. Six years after that—just before I took the LSAT—I found my stepfather dead from a self-inflicted gunshot wound. This past summer, my brother-in-law committed suicide in similar fashion. And, to be frank, the reason I ultimately turned to the law was nothing profound: I chose law after being criticized for wanting to be a video game developer—I was told by others to “get a real job.”

I tell you this up front because these circumstances are directly and cumulatively responsible for where I’ve ended up. Today, I am a judicial clerk to a wonderful mentor—the Hon. Stephen N. Limbaugh Jr. of the U.S. District Court for the Eastern District of Missouri. I also serve as a captain in the U.S. Air Force JAG Corps.

I was once doubted by a high school teacher who told me I couldn’t make it at my local community college (and, to be frank, I doubted myself at the time), but I now have a handful of degrees from several universities. I am blessed to be a husband and father of two. I’ve authored a number of articles, argued before myriad courts (including the 8th Circuit just three years into practice) and last year received a statewide Young Lawyer of the Year award.

So, how did I get from challenging roots to where I am today? That is an interesting story.

In the fall of 2005, I found myself alone in an apartment in Tempe, Arizona, battling severe depression. I’d suffered for many months after my father’s death. I was confronted with a choice: give up, believing I was a victim of circumstance, or fight. It was then that happenstance delivered an answer.

The Tom Cruise film The Last Samurai was a strange place of comfort for me at the time, and it had been on TV a few nights before. That prompted me to purchase the obscure book Bushido: The Soul of Japan, written by Inazo Nitobe in 1899. I had it with me that day and began to study it.

Rectitude (gi), courage (yu), benevolence (jin), politeness (rei), veracity (makoto), loyalty (chugi), self-control (jisei), and honor (meiyo). These distinctly Japanese principles, made famous as the unwritten moral code of the Tokugawa-era samurai, became my compass. And as I practiced them, I found they were uniquely tailored both to my personal journey and to the profession of law.

I began to share my story rather than hide from it. Bushido speaks of veracity (truthfulness), and in an age of half-truths, omissions and unspeakable taboos, I found it freeing to openly discuss my experiences with others. In that openness, I discovered an appreciation of another of Bushido’s principles: courage.

Courage is “doing what is right,” a simplistic notion in itself, but I took it to mean something else, too. I began to realize doing what is right is only fully achievable because of our adversity. It is simple enough to speak of the hypothetical good we might do, but it is something else still to do good at the actual cost of ourselves.

Law, like my discovery of Bushido, was also a fortuitous bit of luck. I chose it because I believed it to be an admired, noble profession that would quiet doubters. For me, though, it became something more transformational. Law provided repeated, concrete opportunities to identify and do what is right. In this, I began to understand the principle of rectitude.

Rectitude, of course, is both the alpha and omega of the law—it is how we orient ourselves and where we hope to end up. I came to discover, too, that benevolence and politeness play a tremendous role; I quickly divorced myself from the old notion that “advocacy” requires an abandonment of good manners. Courage, veracity and self-control are also paramount. The profession seems, at least to me, to overemphasize winning and profit-generation at the cost of doing what is just—particularly in the teaching of young attorneys. But these three principles temper against such impulses.

And then there is loyalty, which seems today to be a constant struggle between employers and a new age of millennial-minded employees. (I digress for a moment to suggest we millennials are not in fact disloyal as much as we seek a mutuality of loyalty—and in that, a feeling of purpose and belonging.)

Finally, there is honor. Honor is the badge either earned or lost in the regular or irregular use of the action-oriented virtues described above. It is the constant reminder of our pursuit of rectitude—a feeling of shame when we knowingly do wrong. As I was still discovering my voice in the legal profession, I admit to feeling some sense of shame; I did not always feel good about doing what I was told to do, and I was afraid of the repercussions if I did not abide. A poor excuse. Honor is frightfully difficult to recapture when it is freely handed away.

My path to law, my story, and these virtues are intertwined. I traveled from near-defeat to a still-blossoming success because of the adversity underlying my story and because of the virtues I clung to in those moments. The practice of law and military service have served as opportunities to project these elements in ways that serve others. And while I wish I had the time to share with you the myriad reasons why Bushido is a wonderful match to the legal profession—the ultimate purpose of this short article is more modest: I hope that, by sharing my own story, you find the encouragement and curiosity to persevere in your own circumstances.

In your life and legal practice, I encourage you: Fight—but do so with humility, respect and open-mindedness. Do the right thing, even at personal cost. Jealously guard your honor. Never lose sight of rectitude. Most of all, do not be shy nor ashamed of your experiences; they are the foundation of your strength.

Shane Blank earned his JD from the University of Missouri School of Law, an LLM in international and constitutional law from Washington University School of Law, and a bachelor’s degree in English and psychology from Missouri State University. He is a captain in the reserve component of the U.S. Air Force JAG Corps currently serving a four-year clerkship with the federal district courts.