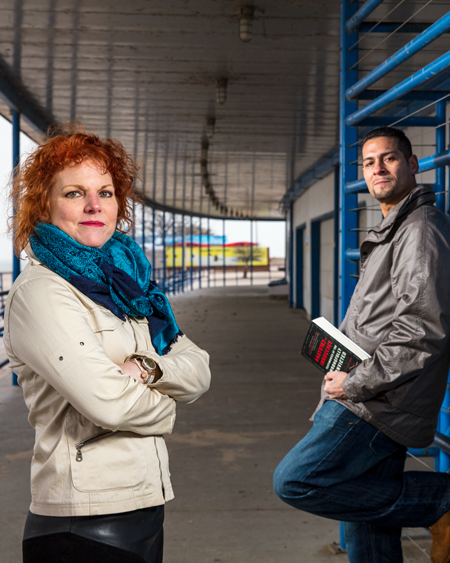 They’ve confessed to murders they didn’t commit, were mistakenly identified by unreliable witnesses, and have been convicted on phony evidence and false testimony. Many endured decades in prison before the truth would set them free.Every one of the wrongfully convicted has a compelling story, and a group of top-notch mystery and thriller writers was recruited to help tell some of those tales in a new book, Anatomy of Innocence: Testimonies of the Wrongfully Convicted.

The book was developed by author and Loyola University Chicago law professor Laura Caldwell and Los Angeles author and tax attorney Leslie Klinger. They wanted to illuminate the fear, the frustration and, ultimately, the faith that these people experienced before they were eventually exonerated.

“They’re just heart-wrenching, every one of these stories,” Klinger says. “It’s amazing to see the strength of these survivors.”

“It shows that it can happen to anyone,” Caldwell adds.

Caldwell, author of the Izzy McNeil mystery novel series, also is the founder of Life After Innocence, a Loyola law school course that helps exonerees navigate through some of the legal and social challenges they face after release. A portion of the book proceeds will benefit the program. Klinger is the editor of The New Annotated Sherlock Holmes, among other books.

Caldwell and Klinger came up with the idea for the book while chatting at a mystery writers’ conference. Because each wrongful conviction story was long and often convoluted, they decided to ask writers to cover different phases of the experiences, from arrest to exoneration to readjusting to life after prison.

“We thought: Let’s have these masters of storytelling, who already have a deep understanding of criminal procedure and know how to drive a plot, and give them a snapshot of the story to cover and write about,” Caldwell says.

Caldwell and Klinger ran the idea by some of their mystery-writing colleagues. “When we explained the project, people jumped on board,” Klinger says. “No arm-twisting was necessary.”

The resulting stories are chilling and heartbreaking. They evoke the feeling of helplessness that many of the wrongly convicted experienced while also celebrating persistence and endurance. In the opening chapter, S.J. Rozan tells the story of California law student Gloria Killian, who thought she was being helpful by talking to detectives about an acquaintance’s murder and wound up charged and jailed for the crime.

At the end of the book, Caldwell writes about how Illinois exoneree Juan Rivera, who served about 20 years for a murder and rape he did not commit, savors being the father of a baby girl and watching the sun rise each morning.

Lee Child is among the big-name authors. He writes about Kirk Bloodsworth, the first person exonerated based on DNA evidence. Child was a natural choice to chronicle Bloodsworth because a fictional character from Child’s books, Jack Reacher, comes from a military background like Bloodsworth does, Caldwell says.

Chicago novelist Sara Paretsky writes about David Bates, who was 18 when police picked him up on suspicion of murder, handcuffed him to a wall and put a typewriter cover over his head. Bates confessed out of desperation, hoping to straighten it all out later. It was 11 years before he was exonerated. “The powerlessness he felt at his torturers’ hands sweeps through his body, paralyzing him,” Paretsky writes.

The book also includes a never-before-published essay by playwright Arthur Miller, who had taken up the cause of a wrongfully convicted man from Connecticut named Peter Reilly. At 18, Reilly confessed under pressure to murdering his mother in 1973.

All these stories shed light on the unthinkable—going to prison for a crime you didn’t commit.

“We are not trying to indict the American justice system,” Klinger says. “This is a human system. I hope this will bring it more attention.”

This article originally appeared in the March 2017 issue of the ABA Journal with this headline: "Tales of Innocence: Mystery and thriller writers tell the stories of the wrongfully convicted."