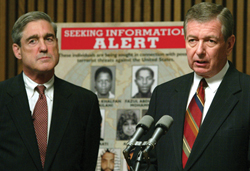 It’s been nearly six months since former President George W. Bush went home to Texas, but he left behind in Washington a fierce debate over whether Bush administration officials could be held legally accountable for a series of questionable war-on-terrorism policies.

The U.S. Supreme Court has served notice, however, that it will shield top ad­min­­istration officials from civil suits. In Ashcroft v. Iqbal, issued in May, the court set a high barrier against suits that target policymaking officials held responsible for harsh inter­rogation of prisoners, wiretapping without a warrant, the “extraordinary rendition” of prisoners to countries that practice torture, or the alleged abuse of “enemy combatants” held in military brigs and at Guantanamo Bay.

But lawyers say Iqbal will prove even more important in ordinary civil litigation. They say the decision raises the hurdle to get past the pleading stage, strengthening the specificity needed to get into court. No one seems to doubt the court wants to make it harder for plaintiffs to get inside the door.

“It’s a really bad opinion, and I expect it will become one of the most cited opinions,” says Washington, D.C., lawyer Alan Morrison, who formerly headed the Public Citizen litigation team. “In all kinds of cases—employment discrimination, securities, antitrust—judges will use it as an excuse to throw out suits on the pleadings.”

New York City lawyer Meir Feder, a partner at Jones Day, agrees the decision will have a wide impact, but he finds much to like.

“The days of pure notice pleading are gone. The court is basically saying you have to have facts, not just conclusions, before you file your complaint. It creates a real hurdle [for plaintiffs lawyers]. They can’t file the case and go forward just in the hope that discovery will yield the elements of proof.”

It is the second time in three years that the court dismissed a major lawsuit at the pleading stage. The court first sounded this new note of skepticism in 2007’s Bell Atlantic v. Twombly. In a 7-2 decision, the justices tossed out a huge antitrust suit that alleged the former “Baby Bells” had conspired not to compete against each other.

In the Twombly majority opinion, Justice David H. Souter wrote that the plaintiffs had claimed there was a possible conspiracy, but put forth no facts to make the claim plausible. Souter added that it was possible to believe the regional telephone companies chose on their own to continue operating within their established territories. He also said that because discovery is so expensive and time-consuming, judges should not clear suits to go forward without some facts pointing to a conspiracy.

Iqbal went one step further. It says plaintiffs in a discrimination case must have evidence of an official’s “discriminatory state of mind.” That phrase is likely to echo in future cases in which a government official or corporate executive is sued for discrimination.

The 5-4 decision dismissed a suit against former Attorney General John Ashcroft and current FBI Director Robert Mueller. Writing for the court, Justice Anthony M. Kennedy said the plaintiff put forth only “bare assertions” and “conclusory” statements that Ashcroft and Mueller were responsible for a racially and religiously discriminatory policy that targeted Arab Muslim men in the wake of the terrorist attacks of Sept. 11, 2001.

What wasn’t clear was what would suffice to continue the suit. Kennedy agreed that in the fall of 2001, hundreds of Arab Muslim men in the New York area were swept up by federal agents and questioned, often for months. They included Javaid Iqbal, a Pakistani immigrant who was a cable television installer on Long Island.

At the time, top officials at the Justice Department suspected the al-Qaida network had sleeper cells in the U.S., with plotters ready to carry out further terrorist plots. Ashcroft said he would use any and all legal means to gather intelligence and expose the plotters. Most of those who were arrested were immigrants from Arab, Muslim and South Asian countries. However, none of the more than 1,000 people taken into custody by the FBI was later prosecuted as a terrorist, although many—including Iqbal—were charged with immigration offenses.

Kennedy also agreed that 184 men, including Iqbal, were held for months in isolation in a maximum secu­rity prison in Brooklyn and subjected to harsh ques­tioning. Iqbal said he was shackled, kicked, punched, strip-searched and screamed at by guards who called him a “terrorist” and a “Muslim.” He lost 40 pounds when he was incarcerated and said he was denied needed medical care after one of the beatings.

Iqbal later pleaded guilty to using false documents to work in the United States and was deported to Pak­istan. His suit named 34 officials and called Ashcroft the “prime architect” of the interrogation and impris­onment policy.

So what was lacking in his complaint? Evidence that Iqbal and the other Arab Muslim men were singled out by Ashcroft for harsh interrogation in maximum security because of their race and religion, Kennedy said. The complaint “does not contain any factual allegation sufficient to plausibly suggest [Ashcroft’s] discriminatory state of mind,” he wrote.

It is not clear how a former prisoner could show evidence of Ashcroft’s state of mind without being able to question officials and inspect documents. Former Yale law dean Harold Koh, who filed a friend-of-the-court brief on behalf of Iqbal, calls this the catch-22 approach to civil litigation. That means, says Koh, plaintiffs are told they must include certain facts in the pleading that can be obtained only through discovery.

Kennedy’s opinion also strongly hinted that Ashcroft and Mueller were entitled to immunity from a suit such as this because their actions were reasonable. “It should come as no surprise that a legitimate policy directing law enforcement to arrest and detain individuals because of their suspected link to the attacks would produce a disparate, incidental impact on Arab Muslims, even though the purpose of the policy was to target neither Arabs nor Muslims,” he wrote.

While Ashcroft and Mueller were dismissed from the suit, the justices said “we express no opinion” on Iqbal’s allegations involving prison officials.

This time, retiring Justice Souter, the author of Twombly, spoke for the dissenters. He said it was plausible to believe, as Iqbal had claimed, that Ashcroft and Mueller “were at the very least aware of the discriminatory detention policy and condoned it and perhaps took part in devising it.” This, he said, should be sufficient to permit the suit to go forward and to let the plaintiffs try to prove these top officials implemented a discriminatory policy.

The conservative Washington Legal Foundation called the decision “particularly welcome” in the area of national security, and for civil litigation generally. “It ensures the ability of senior national security officials to perform their duties without the distraction of having to defend against claims for money damages,” says Richard Samp, counsel for the WLF. “By enabling all defendants to win dismissal of unsubstantiated claims, it will make it more difficult for plaintiffs to coerce settlements from defendants seeking to avoid the costs of discovery.”

On the other side, the New York City-based Center for Constitutional Rights denounced the ruling. Its lawyers, in a parallel suit, represented a class of Muslim, Arab and South Asian individuals who were arrested and held after 9/11, in some instances based on “nothing more than a general suspicion of men who ‘looked Arab,’ ” the group said.

Rachel Meeropol, an attorney for the CCR, called Iqbal “a grave disappointment” and said it “makes it easier for those who run our country to escape liability when they act with subordinates to target people for the color of their skin or the tenets of their faith.”