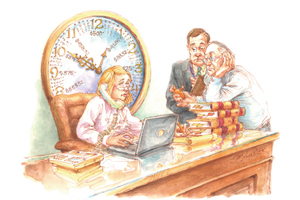 Two years ago, when the sky seemed like the only limit on the practice of law, the heart of Windstrom & Crusher’s trial team broke away to start one of the most aggressive commercial litigation firms in town: Strickland, Michaelman & Fox.

Soon the “Scorched Earth Seven” added 12 bright young associates to do the “dog” work and stopped taking “mundane” defense cases because none of the insurance companies would pay their stiff new hourly rates.

Strickland, Michaelman & Fox still had lots of work and plenty of clients who agreed to pay their hefty rates. But at the end of each month, after paying the usual bills, along with the salaries of the secretaries and associates, there wasn’t enough left over to pay the partners’ usual draws, which kept getting smaller and smaller.

Their powerful clients were having their own cash-flow problems and had become “slow pays.”

At the same time, clients started to challenge the firm’s bills. They demanded increasingly detailed documentation of all expenses and challenged the need for associates to help partners hold client conferences, study documents, talk to witnesses and take depositions.

Some clients went so far as to send their accountants over to the Strickland firm to audit the bills they had been sent.

The whole firm was hurting. First they let almost a third of their secretarial staff go. A few months later, they eliminated five associates and reduced the pay of the rest by 25 percent. All those who stayed started to put in extra hours—at their reduced salaries.

The effect on everyone—partners, associates and office staff—began to show in the quality of their work. A number of Strickland’s best-paying and most reliable clients started taking their work to other firms, even though those firms were having troubles of their own.

That’s when Joyce Michaelman decided she should explore whether her old firm, Windstrom & Crusher, might take her back. So one day she called her friend Sandra Vandervoort, the head of Windstrom’s corporate litigation division, and invited her to lunch.

When Sandra heard about Strickland’s problems, she said, “It’s happening everywhere. The world is different. The economy is different. Clients are different. They take weeks, sometimes months, to ‘flyspeck’ every one of your bills. Not just to find something they don’t like, but also to justify delays in paying their bills as long as they can.

“The gravy train is over,” said Sandra. “Gone are the days when big clients understood and accepted that they were being billed for training associates and compensating partners, and for buying dark red carpets, mahogany furniture and fancy electronic equipment.

“If you’re charging thousands of dollars for eight or 10 hours of a partner’s time, you’ve got a lot of justifying to do. Not just the details in your bills, but the thought and analysis that goes into all the letters you send, the memos you write, the questions you ask, the explanations you give for the actions you recommend. They all have to create the impression that you and your firm are worth it.

“In other words,” Sandra said, “anticipate all of your clients’ flyspecking. Impress them with your competence in your bills as well as in all your letters, memos and conversations. Let them see and feel why your firm is special.”

“You didn’t do all that when I was at Windstrom & Crusher,” said Joyce.

“Not to the extent that we do now,” said Sandra. “You know how most law firms bill their time in six-minute increments, tenths of an hour? Well, some of our clients complained that it was creating too much leeway, putting too much of a fudge factor into our billing. They said we ought to bill by the minute instead.

“Rather than defend our system, we did them one better. We started calculating our time to the second decimal point. And we stopped rounding off our rates. The results are fascinating: 7.82 hours at $436.79 an hour looks a lot harder to challenge than 7.5 hours at $400 an hour. As if somehow it’s exact, so it must have a rational basis.”

“One of the amateur psychologists in our tax department claims that when you round your numbers off, it looks like you’ve rounded them up,” said Sandra.

“But does it work?” said Joyce.

“It seems to,” said Sandra. “Every little bit helps. Like I said, the gravy train is over.”

Finally, Joyce said, “So what are the chances of welcoming an old friend back into the fold? You need a bright, young tiger to put in your litigation tank?”

“If it were up to me I would say yes in a minute,” said Sandra. “But Windstrom & Crusher’s policy hasn’t changed. Like I told you when you quit, the only way you can come back is if you left to become something like an appellate court judge, the governor or maybe a U.S. senator.”

“I remember,” said Joyce. “I was hoping you had forgotten.”

As she walked back to the offices of Strickland, Michaelman & Fox, Joyce wondered whether she could possibly talk her partners—especially “Tricky” Strick­land and “Wiley” Fox—into making the kind of changes they needed now that the gravy train had left the station. She had no way of knowing that Windstrom & Crusher had already told both of them that they couldn’t come back.

At the same time on the other side of town, a young lawyer, Maria Archuleta, and her partner, John Wellcome, were working on their own problems. They were thinking of ways they could make their billing system more flexible to make life easier for their increasing number of clients.

“The problem that nobody ever talks about in the practice of law is that one size does not fit all,” said John. “And how you make your bills easier for your clients to pay is a good example of that.”

“Absolutely,” said Maria. “Too many lawyers live in a ‘take it or leave it’ world. Half of our clients are small businesses that have had no contact with any lawyer except maybe to look over the contract they had to sign when they bought their mom and pop grocery store.”

“Right,” said John, “and now they’re suddenly suing or being sued, while their insurance company is making strange sounds about offering a defense without admitting coverage if they lose.”

“And they’re not certain whether they can afford to pay a lawyer of their own,” said Maria. “Like poor Mr. Alexander this morning.”

“Well, we told him what our hourly rate was, and let him know he could spread his payments out over a year without any additional charge,” said John.

“We could take it on a contingent fee,” said Maria.

“I think we need to do more of that.”

That’s when Janet Rawlings, a third-year law student who was working for Archuleta & Wellcome as a part-time law clerk, piped up. “But Professor Warbler says it’s unethical to take commercial cases on a contingent fee. It’s only permitted in personal injury cases.”

John and Maria laughed. “Both of us had Warbler in law school,” said Maria, “and he has some strange ideas. In fact, contingent fees are perfectly proper in commercial cases, but a lot of law firms think it’s a practice that is beneath their dignity.”

“It’s a great way to help out individuals and small businesses,” said John. “And it tends to keep the lawyers honest. If you think the case isn’t worth your time unless you’re guaranteed to get paid, you probably ought to tell your client the case may not be worth pursuing.” “There are a lot of fancy firms that take cases they know are worthless,” said Maria, “but their clients really want to be vindicated in court. Emotions are a big factor in almost every legal dispute.”

“Anyway,” said John, “a contingent fee would be fine for Mr. Alexander if he were the plaintiff. But he’s the defendant.”

“So what?” said Maria. “If he loses he’ll have to pay $150,000 out of his own savings, which will pretty much wipe him out. But if he wins, he pays the plaintiff nothing, and it would be a lot easier to pay our fee. The contingent fee doesn’t have to come out of the verdict to make good economic sense, and it can provide real help to a client in trouble.”

John smiled. “You know what? You’re right again. Now we need to come up with a reasonable factor for how much to increase our hourly rate for contingent cases so our clients can choose which way they would rather be billed. Agreeing to pay a slightly higher rate if they win a contingent fee case would be kind of like buying insurance.”

Maria nodded in agreement. “I really like that idea,” she said. “Keep it all out in the open. It’s crazy to treat your clients as adversaries.”