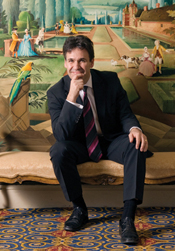 It’s tempting to believe that when the economy recovers, the legal profession’s lost jobs and revenues will come coursing back. But don’t bet on it, says British legal technology expert Richard Susskind.

The economic downturn is only accelerating powerful trends that already were in motion, says Susskind, who received a doctorate in computers and the law at Oxford University and who now serves as IT adviser to the Lord Chief Justice of England and Wales. The product of those trends, he says, will be a new generation of technology-based lawyers who will change the nature of legal services.

“When the storm lifts, the terrain is going to look wildly different,” predicted Susskind in his keynote speech on April 2 to the ABA’s Techshow 2009 held in Chicago. “Those who think the techniques they must adopt to survive over the next few months will be irrelevant to the future are fundamentally mistaken. They are with us for life.”

In his speech, Susskind sounded themes from his book The End of Lawyers? Rethinking the Nature of Legal Services, published late last year by Oxford Uni­versity Press. That message may be particularly resonant in a period during which the legal industry has suffered significant job losses. Some 2,700 jobs were lost in the field—including lawyers and support staff—just during March, according to num­bers from the U.S. Bur­eau of Labor Statistics.

“Over the next decade, we’re going to see fundamental change in the legal services market,” Susskind told his Tech­show audience. “Legal services as we know it today will fade, not entirely but substantially.”

Susskind’s message—simultaneously somber and hopeful—also was underscored by the continuing interest in Tech­show, which bills itself as the world’s premier legal technology conference and expo. Sponsored by the ABA’s Law Practice Manage­ment Section, Techshow is now in its 23rd year.

“The show continues to grow because technology continues to both grow and change,” said Laura A. Calloway, director of the Alabama State Bar’s Prac­tice Management Assistance Pro­gram and Techshow chair.

Susskind said it’s time for lawyers to give up the notion that their value lies in traditional one-on-one consultation. Under growing pressure from clients to do more with less, law­yers will use technology not only to streamline and automate existing processes but to invent new ones.

“Innovation is when you use technology to allow you to do things that weren’t previously possible,” he said. “It’s not a question of seeing more clearly some predetermined future; it’s working to create a new future.”

Skeptics would do well to remember Susskind predicted in his 1996 book The Future of Law that lawyers would turn to e-mail as a primary means of communicating with clients—a view widely branded then as heresy.

His latest book sketches a future revolutionized by technologies, including closed legal communities in which corporate clients share and syndicate legal advice and documents online to tackle collective regulatory and compliance problems.

Not even areas like family law will be unaffected, Susskind said.

An online dispute resolution system developed at Victoria University in Mel­bourne, Australia, helps divorcing couples work out trade-offs based on which items each desires most.

Susskind says one of the important new tasks—performed by lawyers working as “legal know­ledge engineers”—will be to organize knowledge and processes that are distilled into computer systems to help law firms serve clients. As legal services continue evolving, he says, these systems will be offered directly to clients as a packaged do-it-yourself service.

“It’s not the end of lawyers,” Suss­kind told his Techshow audience. “It’s the end perhaps of many or most lawyers as we know them. In reality, there are new opportunities out there. It’s an incremental revolution. Every year we keep taking little steps to an IT-enabled but radically changed set of legal services.”