Now You Own It, Now You Don't 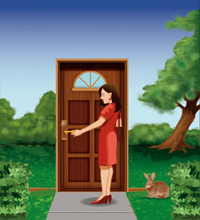 There were fireworks at Denver’s Invesco Field in October, but it had nothing to do with the Broncos-Steelers game.

Instead, the celebration—which took place before the game—was for Lakewood, Colo., resident Veronica Baca, who had apparently just won a brand-new house by fitting a key into a lock and opening a door.

The fireworks were followed by a trip up to a corporate suite with officials from the Denver Newspaper Agen­cy and Centex Homes to sign a winner’s release form.

Amid all the hoopla, few were aware that another finalist’s key had also opened a door. It was eventually decided that the other finalist, Paula Hankins, had won the house.

Baca didn’t take the news well. “Who gives you a house … and then takes it away from you?” she was quoted as saying. “It’s unbelievable.”

Jamey W. Jamison, who represents Baca and her husband, filed complaints against the newspaper agency and Centex Homes, which claimed a “malfunction” clause in the rules per­mitted a random drawing to determine the winner.

Jamison rejected the assertion, saying that Baca’s key opened the door, just as it was supposed to. The fact that two doors opened, he says, was simply human error.

Centex relented and allowed Baca to pick any of its houses under construction in the area as her own, provided that she abide by a confidentiality clause in the contract.

“I’m sorry my client had to go through this, but I’m happy for the outcome,” Jamison says. “Centex did the right thing.”