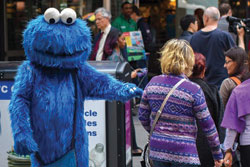 Congress shall make no law abridging the freedom of speech or the right of Cookie Monster and Hello Kitty to peaceably assemble, right?

Not so fast. In New York City, dozens of costumed characters—people donning outfits depicting cartoon and other characters—are popping up in Times Square and causing a ruckus.

The characters reportedly earn their keep by soliciting tips from tourists who have their pictures taken with them. The problem is that many unsuspecting tourists aren’t told up front that they expect to be compensated for the photo op. Some characters have in turn acted aggressively toward anybody who doesn’t cough up.

In April a person dressed as Cookie Monster reportedly shoved a toddler when the child’s mother refused a tip. Super Mario allegedly groped a woman, and Elmo was recorded during an anti-Semitic rant.

That’s prompted a heated debate in the city over whether officials can legally regulate the characters without treading on the First Amendment.

“Dressing up in a costume and walking around Times Square is, we believe, a First Amendment-protected activity,” New York City Council Speaker Christine Quinn told Reuters.

Others say public safety is at stake.

“This is predatory or aggressive behavior on the part of people who take advantage of their anonymity to take advantage of people,” says Tim Tompkins, president of the nonprofit Times Square Alliance. “We feel there’s a need to look at how these characters are regulated, obviously in a way that’s consistent with First Amendment issues and free speech principles.”

The line can be fuzzy.

Tompkins has suggested that the city create a licensing or registration scheme that would allow for some kind of background or criminal check.

Peter Scheer, executive director of the First Amendment Coalition, based in San Rafael, Calif., thinks that a “carefully crafted” licensing scheme could be defensible “if there are reasonable time, place and manner restrictions that would apply to any or all of these costumed people regardless of any message they might be trying to convey.”

Scheer adds: “The justification for it would be to know the name and contact information for all the Elmos out there, so if they did get a complaint [about] ‘Elmo No. 3’ they would know who to call or where to send the police. That seems reasonable.”

At the end of the day Scheer thinks the characters aren’t doing much to express themselves anyway. “Elmos are just standing there dressed as Elmos. They’re not communicating a Republican versus a Democratic message, or an anti-war message. They’re just Elmo.”