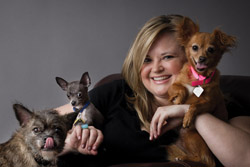 Amber Stanton: "You should only serve on a board if you are passionate about the cause." (Photo by Manny Rodriguez)

Dallas-based lawyer Amber Slayton is a longtime animal lover. She put her passion into practice three years ago, accepting a seat on the board of Operation Kindness, a regional animal shelter with a $2 million annual budget. Slayton has since been appointed vice president of the 12-member board, elevating her responsibilities and extending demands on her personal time.

Solos often consider posts such as Slayton’s a way to boost their profile in the local community, cultivating networks that could lead to more business. But they should give more thought to whether they’re up to the demands of the job, Slayton says.

“I very strongly agree you should only serve on a board if you are passionate about the cause and really have the heart to do the work,” she says. “You work while you’re there. No one’s paying you.”

Nonprofit boards appear to be working a lot harder these days ever since the requirements of the Sarbanes-Oxley Act of 2002 pushed transparency.

Then in 2008 the IRS introduced a redesigned Form 990, which called for increased accountability for organizations claiming tax-exempt status.

“The IRS is very interested in what an organization is doing from a governance standpoint,” says Des Moines, Iowa, attorney Willard L. Boyd III. Boyd, who practices with Nyemaster, Goode, West, Hansell & O’Brien, is chair of the Nonprofit Organizations Committee of the ABA Section of Business Law. Lawyers “need to be actively engaged,” Boyd says. “They need to be attending meetings; they need to learn about the organization, … asking questions when there are red flags and making sure they’re comfortable before they vote on matters.”

Adding to the time commitment is an increased emphasis on fund raising duties, as charitable organizations have suffered a decline in giving amid the recession.

For Slayton, the tasks are a labor of love. Early on she was asked to help rewrite the bylaws of Operation Kindness. She and other attorney-directors on the board vet complex documents, such as those relating to bequests, and connect the group to outside legal counsel when needed. They attend seven meetings a year, as well as special weekend sessions.

“Having that [legal] expertise on the board is really helpful, especially with all the issues we have to deal with,” says Sherwin Daryani, the group’s executive director.

Boyd notes that attorneys serving on nonprofit boards also must be mindful of potential conflicts of interest. As directors, they must act in the best interest of the group and avoid, for example, a relationship with any organization that does business with the nonprofit. If they also provide legal services on the board’s behalf, they must be aware of their ethical responsibility to the client.

It should be clear up front whether or not they will be asked to function in a pro bono legal capacity, whether the nonprofit has directors-and-officers insurance, and whether their own professional liability coverage extends to this type of volunteer work, he says.

Some lawyers aren’t ready for the risk.

Adam Prizio, a newly minted solo in Hartford, Conn., carefully weighed joining a nonprofit board to boost connections as he builds a niche practice in the food industry.

Ultimately he chose not to pursue the seat.

“I don’t have access to the kind of mentorship to navigate it on a day-to-day or matter-by-matter basis,” Prizio says. “It seemed like there was a great deal of risk there.”