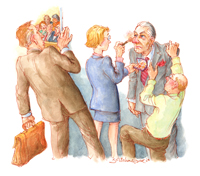 “Angus, I’ve been thinking about this idea of yours that character plays a role in how judges decide cases,” said Nick Wheeler. “Which is why I’ve asked you to help out this afternoon.”

Wheeler had reason to be concerned. His client, Pen­craft Builders, had been stunned by a $17 million verdict against it in an age discrimination case.

Fortunately, Nick’s firm, Randolph and Wheeler, got a new trial—not because they convinced Judge Mud­rock that the verdict was excessive, but because Mud­rock discovered that he had made a mistake in his jury instructions.

“Pencraft Builders is one of the largest developers of upscale subdivisions in the country,” Wheeler said. “And their CEO, Donald Pencraft, has a commanding air about him. I’m convinced he’s the one who can put on the right face—show the winning character—when we retry this case.

“But the problem was convincing Mr. Pencraft to put enough time into it,” said Wheeler. “Then one of our young associates found an interesting article in the Wall Street Journal about the Microsoft case. The article described how, whenever things got a little boring at trial, the government lawyers would show another clip of Bill Gates saying something outrageous in his video depo­sition and the whole courtroom would get stirred up again. When I showed Mr. Pencraft that article, he decided that maybe this time he should do some serious trial preparation.”

GETTING DOWN TO SERIOUS WORK

We worked for hours. Nick Wheeler and his partner, Patrick Reilly, who tried the case the first time, took turns doing Donald Pencraft’s direct examination. Angus critiqued while I took notes and operated the video camera. The idea was to let Pencraft see for himself how he came across.

The results were dismal. Pencraft obviously was putting effort into the exercise, but he looked like he was trying to impress everyone with how important he was. Despite all of Angus’ suggestions, Pencraft was stiff, guarded and arrogant. He resented the intrusion the case was making on his time. He said it was “all the plaintiff’s fault for filing this outrageous lawsuit in the first place.”

Then Angus took Pencraft on cross-exam, and it was my turn to critique.

It started out as classic Angus. He used short, simple leading questions to paint a picture of Pencraft as a ruthless executive who didn’t care about the people who worked for him or what happened to them when he found out how much money he could save by firing the older employees and hiring younger ones.

But in less than 10 minutes the cross came to a halt. After one particularly telling question, Pencraft stood up and started screaming at Angus. Then, as quickly as he started, he stopped and sat down again. “I won’t do that in the trial,” he said. “It’s just that I feel strongly about this case.”

“Right you are,” said Nick with a chuckle that sound­­ed forced. “Better here than in Judge Mudrock’s court.”

This time, I decided to interrupt whenever Pencraft gave a bad answer—which turned out to be most of the time.

Right at the start, Angus asked a simple yes or no question, and Pencraft gave an evasive answer.

“No, you didn’t,” I said. “Watch the monitor.” I replayed the question and Pencraft’s answer. “You dodged the question because you didn’t like it, and instead you answered some other question that wasn’t asked.”

I smiled. “No, you’re not,” I said. “You’re being a bad witness. You’re supposed to answer the questions, not argue the case. Whenever you’re evasive or argumentative, you lose credibility, and the judge and jury won’t trust anything you say.”

Pencraft took it to heart and answered Angus’ questions for four or five minutes. Then he started up again.

This time Angus called a halt. “Wait,” he said. “The answer to that last question was obviously yes, and ev­eryone on the jury will know it. But you didn’t say yes. You’re the witness and you actually objected to a perfectly proper question. You do that in trial and Judge Mudrock will cut you some new body parts.

“You may have a plausible defense in this case,” said Angus, “but playing those kinds of games can cost you the trial. Let your lawyers do the objecting. You just answer the questions.”

“Now I see why Nick wanted you involved,” Pen­craft said. “You guys sure don’t pull any punches.”

“It’s not in our job description,” said Angus.

We kept going for another hour and a half, but it never got much better. By the time Pencraft left to go to another meeting, a pall had settled on Randolph and Wheeler’s fancy new moot courtroom.

“We’re stuck,” said Wheeler. “The plaintiff will never settle this case for a reasonable amount after the jury gave him $17 million in the first trial. We’re going to have to try it. And if Pencraft behaves the way he did today, we may get hit harder than we did the first time.”

“Maybe we should take the sly approach,” said Reilly. “Put Pencraft on our witness list so the plaintiff won’t bother to call him as an adverse witness and risk the danger that our daylong ‘cross-exam’ would totally disrupt his case. Then when it’s our turn, we just forget to put him on the stand.”

“You can’t count on any opponent not calling your CEO as an adverse witness,” said Angus. “And if Pencraft made a bad impression in the first case—which is easy to believe at this point—the plaintiff is undoubtedly hoping you will try to ‘improve’ his testimony in the second trial with some substantive changes so they can contradict him with what he said the first time.”

“I’m afraid you’re right,” said Wheeler. “We’ve not only got to try the case; we’ve got to put Pencraft on the stand. And it’s going to kill us because of the way he behaves.”

“He definitely doesn’t look like he’s the one wearing the white hat,” I said. “And the character of the parties is important. It’s more than just ‘the equities’ and who did what. Juries want the good guys to win. And who the good guys are is based on fairness factors that go far deeper than the legal issues in the case. Even judges are profoundly influ­enced by what they think of the real parties—even if they never testify.

And in this case, Donald Pencraft is Pencraft Builders.”

“Well, this day certainly was a complete bust,” said Reilly.

“On the contrary,” said Angus. “I think this has been a particularly valuable session.”

“How do you figure?” said Wheeler.

“First,” said Angus, “I think Mr. pencraft may have picked up a little more than you realize. It takes time for some of these ideas to take hold. You should have at least one more session with him—maybe two.

“Not that he will ever be what you would call a good witness—which is not unusual. Lots of good corporate officials make poor witnesses precisely because they take their management style with them wherever they go. Donald Pencraft is never going to charm a jury, no matter what you do. But a jury may actually respect him if he gives simple, straight answers on direct examination and stops trying to win the war with each response on cross.

“Second, you started out saying Pencraft was going to win the trial for you. Now you know it would be a serious mistake to make him the centerpiece of your case. You don’t want him to become the focus of judgment.”

“I guess you’re right,” said Wheeler. “So how do we possibly win the character battle?”

“That’s the third thing you’ve learned,” said Angus. “The character battle is not a beauty contest. There are limitations to how much you can accomplish when you take a witness to the woodshed. You can’t remake people even with years of training, much less with a handful of instructions and a few practice rounds in front of a video camera.

“The rule is, never try to teach a pig to sing. It doesn’t work, and it annoys the hell out of the pig.

“Of course you want to put your best foot forward. So minimize Pencraft’s role in your case. And put him in the middle where he will make the least adverse impact. Then find a better witness to put up front.

“The last point,” said Angus, “is a corollary of the rule about singing pigs. Never try too hard to make your side look good. It won’t ring true. Instead of putting makeup over all of your warts, try to uncover some of theirs.

“Put the focus of judgment on your opponent.”