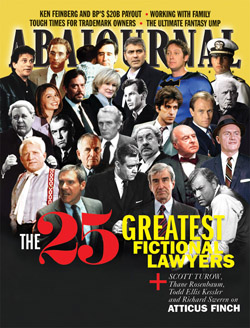 I enjoyed “The 25 Greatest Fictional Lawyers (Who Are Not Atticus Finch).” However, I respectfully submit that any such list must include Dudley “Booger” Dawson, Esq.

Any lawyer and true admirer of the art of oration has studied Booger, Esq.’s courtroom cross-examination of Stanley Gable in Revenge of the Nerds III: The Next Generation—trial-by-ambush at its best. There is nary a moment greater in one’s career than the in-court nerd outing of a former college jock. I nearly lost respect for your hallowed publication as a result of this oversight. Fortunately, you redeemed yourselves by including Horace Rumpole, my second-favorite fictional attorney.

I agree with the choice of Sandy Stern, as played by Raul Julia; Jack McCoy; and Orson Welles in Compulsion. But where is the nod to Wilford Brimley in Absence of Malice? “When we’re done here, there are going to be two things true that aren’t true now. One, the Department of Justice is going to know just what the hell is going on here. And two, I’m going to have someone’s ass in my briefcase.” Also, Perry Shriner (parody of Perry Mason) from National Lampoon Radio Hour (1974). Hilarious!

Best single performance of all time: Sir Laurence Olivier defending Katherine Hepburn in Love Among the Ruins. Hard to find, but worth the trouble.

My father, a law professor, gave me the Tutt and Mr. Tutt stories from the Saturday Evening Post to read when I was a child. Featuring a small-town, father-and-son firm, they probably are the key reason why I am a lawyer today. They would surely seem mawkish by today’s standards—I haven’t seen the books for years.

“The 25 Greatest Fictional Lawyers”: No people of color, only two women—one described as practicing to “meet guys and pay for expensive shoes” and the other as “a woman who can be more like a man.” We’ve come a (not so) long way, baby.

Why no love for William Faulkner’s Gavin Stevens? Stevens—a product of Harvard but a Mississippi practitioner—is at the heart of the Snopes trilogy, appears in Go Down Moses, and is the subject of Knight’s Gambit. You’ll look a long time before finding a more admirable lawyer in a work of quality fiction.

I must correct the glaring omission of Charles Foster Ofdensen: the most kick-arse fictional attorney ever. For those of you too uncool to know, he is the attorney and manager for Dethklok, the death metal band in the cartoon Metalocalypse. He is always well-dressed. But he will sue the entire world if they offend Dethklok, and he will fight you with a samurai sword to the death on the edge of a miles-high precipice if you try to supplant him.

It is one of the great tragedies of television that The Defenders has not been brought back in reruns. Lawrence Preston set the bar very high for attorneys defending the Constitution and the rights of those not in great favor with the majority. I fear that the quality of those programs is lost on most people under 60 years of age.

I would include Samuel T. Cogley, who defended Capt. Kirk in the Star Trek episode “Court Martial.” Truly a brilliant lawyer!

How about James Spader playing E. Edward Grey in Secretary with Maggie Gyllenhaal? “Pervy, sadistic solo practitioner in a dominant-submissive affair with his legal secretary” is not on many actors’ resumés.

And seriously—no Lionel Hutz?! What a rip-off!

How about Dennis Denuto, the inept Melbourne solicitor in The Castle? He was out of his league but knew enough to step aside to allow a seasoned barrister to take over the case in Australia’s High Court. And he won!

Denuto’s argument that a family’s home could not be condemned for the expansion of an airport runway to benefit a large corporation was based on “the vibe” of the Australia Constitution. Weak argument for sure, but there have been times when I have been tempted to respond: “It’s … it’s … just the vibe of the thing, your honor!”

What about Fletcher Reed from Liar, Liar? “And the truth will set you free!”

Where the heck are Archie Leach (played by John Cleese) from A Fish Called Wanda and Clinton Judd (Carl Betz) from Judd for the Defense? I am a lawyer today because of the latter show from the late 1960s—an aging lawyer!

Hands down the greatest fictional lawyer of all time was Charles Dickens’ Sydney Carton.