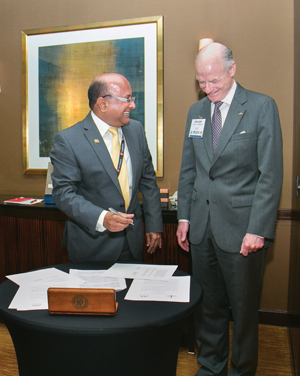 Measured by the standards of diplomatic ritual, the signing of a friendship agreement between the ABA and the Bar Association of Sri Lanka was a modest affair. But representatives of the two bar associations said the agreement will have an important impact on efforts to bolster the rule of law in Sri Lanka after years of civil war and political turmoil.

The agreement was signed by ABA President William C. Hubbard and Anura Meddegoda, a member of the Sri Lankan bar's executive committee and the leader of a delegation of lawyers from his country attending the ABA Midyear Meeting in Houston.

In addition to the Sri Lankan delegation, the ceremony was attended by a number of ABA leaders who are active in the association's Rule of Law Initiative, including past presidents James R. Silkenat of New York City and Stephen N. Zack of Miami, who chairs ROLI.

The agreement comes at a crucial time for the small island nation in the Indian Ocean. Sri Lanka is entering an important new phase in its political development following national elections on Jan. 8, in which then-President Mahinda Rajapaksa was defeated after nine years in power.

Rajapaksa's defeat came as a surprise to many experts because he has been widely credited for defeating the Tamil Tiger rebels in 2009, which ended a bloody civil war that had dragged on for more than 20 years.

But he also had come under growing criticism for expanding presidential powers and failing to stem widespread government corruption. One recent scandal involved the impeachment in 2013 of Sri Lanka's chief justice after she refused to endorse a law granting wider powers to a government position held by Rajapaksa's brother.

The ABA protested the impeachment proceedings in a letter sent to Rajapaksa by then-President Laurel G. Bellows of Chicago.

Among those witnessing the agreement between the ABA and the Bar Association of Sri Lanka were leaders of the ABA Rule of Law Initiative. Photo by Kathy Anderson.

Sri Lanka's new president, Maithripala Sirisena, campaigned on a reform platform focusing on good governance, the rule of law, limits on the presidency's powers and anti-corruption efforts. In one of his first official acts, Sirisena reinstated the ousted chief justice, Shirani Bandaranayake, who then retired a day later.

"Since the election of the new president in January, we've moved a long way from the dark days," Meddegoda said after the signing ceremony. He noted that the previous regime had been characterized by arrests of political opponents of the former president, interference with judicial institutions and political corruption. "The new government has responded very positively to our work."

Hubbard praised the efforts of Sri Lanka's legal community to reinforce rule of law principles. "We are gratified by the courage you've shown in entering into this agreement," Hubbard said. "It proves the commitment that both of our countries and our organizations have to the rule of law."

The friendship agreement outlines how the two bar associations will work together over the next two years on initiatives in Sri Lanka. Those efforts will include information exchanges, delegation visits, participation in conferences, and presentation of technical assistance and legal education programs in Sri Lanka. The ABA has similar agreements with about two dozen national bar associations, as well as other organizations, said Elizabeth Andersen, director of ROLI.

At the government level, Sri Lanka has received funding to support rule of law projects through the U.S. Agency for International Development.

Hubbard and Meddegoda closed the ceremony with an exchange of gifts. Meddegoda presented a carved scroll to the ABA president, while Hubbard gave his Sri Lankan colleague a copy of an ABA special edition of a commemorative book that marks the 800th anniversary of the Magna Carta.

The Magna Carta holds special meaning for current events in Sri Lanka, said Hubbard, because it was one of the earliest affirmations of the principle that "no one, not even a king, is above the rule of law."

This article originally appeared in the April 2015 issue of the ABA Journal with this headline: "Pact aims to bolster rule of law in Sri Lanka."