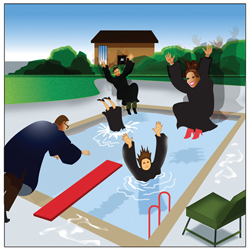 A plan to help some federal judges wade deeper into the pool of patent cases is awaiting U.S. Senate approval—just like it has for two congressional sessions.

H.R. 628 was reintroduced by Rep. Darrell Issa, R-Calif., and Rep. Adam Schiff, D-Calif., in January 2009, and the House has passed it twice. It now sits in the Senate Judiciary Committee, where it has been since March.

The bill would authorize $5 million annually to establish a 10-year pilot program in at least five U.S. district courts that deal with the largest number of patent cases.

“Patent litigation is different,” says James F. Holderman, chief judge for the Northern District of Illinois. “It is more complicated, more time-consuming and more mentally taxing because typically the patent being litigated is a successful advancement of some science or technology. So the judge has to understand that background just to get to the factual basis of the problem and then deal with legal aspects.”

But the bill faces opposition from some districts that have already developed judicial expertise in patent matters. Holderman says the aim is to increase efficiency and lower the costs of patent litigation. Patent cases would continue to be randomly assigned; however, all judges would have the right to opt out of a given matter. The case would then be returned for random assignment among a pool of volunteer judges more focused on patent cases.

“When not properly trained, some judges get frustrated because the rules are so foreign to them,” says Janet M. Garetto, vice president of the Intellectual Property Law Association of Chicago and a partner at Nixon Peabody.