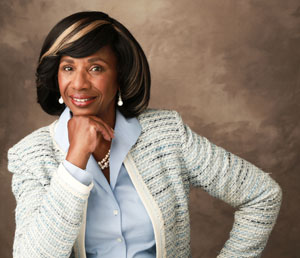 Paulette Brown lets you know what she thinks, her friends say. And if she supports you on something, they add, you can count on having a smart, strategic, loyal and fearless advocate.

Brown, the ABA's new president, is the first black woman and the first woman of color to lead the organization.

“She’s got an incredibly strong will and a backbone made of steel. Yet she has the capacity to be generous, thoughtful, gentle and gracious,” says Elaine Johnson James, a litigation partner in the Boca Raton office of Florida’s Berger Singerman. “She’s wonderful at listening to people and then forging consensus. And she’s just as patient as she is determined and tenacious.”

A Locke Lord litigation partner based in Morristown, New Jersey, Brown also serves as co-chair of the firm’s Diversity & Inclusion Committee. She and James previously were partners at Edwards Angell Palmer & Dodge. That firm went through a merger and became Edwards Wildman Palmer, which merged earlier this year with Locke Lord.

“If Paulette thinks her client did something wrong and has liability, then that’s a case that she will work to settle—and tell the general counsel that it’s the right and honorable thing to do,” James says. “On the other hand, if she thinks her client’s position is pristine, the opposing party needs to come with an open checkbook or prepare for a battle royal.”

A former member of the ABA Board of Governors who has served in the House of Delegates since 1997, Brown joined the association’s Young Lawyers Division in 1976. Brown is an active member of the Litigation Section; she’s also served on the ABA’s Governance Commission and previously was a member of the Commission on Women in the Profession. In 2011, Brown received the Margaret Brent Women Lawyers of Achievement Award.

Additionally, Brown served on the council of the Section of Legal Education and Admissions to the Bar and is a past co-chair of the Commission on Civic Education in Our Nation’s Schools. She also served as president of the National Bar Association, the country’s oldest and largest organization for black lawyers.

Brown’s presidential goals include improving the daily benefits provided to ABA members, enhancing the profession through pro bono service, and bringing more attention to diversity and inclusion. When asked about specific plans, her focus trains on implicit bias, defined as biased behavior that we may not initially recognize in ourselves.

“People don’t realize that they might have unconscious biases. It’s nothing that makes you evil; it’s just part of the natural thought process,” says Brown, who has taken several implicit bias tests and urges everyone to try them. These tests can be found on sites such as Harvard University’s Project Implicit.

In June, the Board of Governors approved Brown’s request to create the Commission on Diversity and Inclusion 360. The com-mission will review and analyze diversity and inclusion in the legal system, the judicial system and the ABA. Over a 10-year period, the commission plans to formulate methods, policies and practices that advance diversity and inclusion, including training videos for judges and model plans for bar associations.

Brown, who grew up in Baltimore, seems to have been thinking about implicit bias from a young age. Her father often told his children that there was no such thing as “girl jobs” or “boy jobs.” He did most of the family’s laundry and cooked all of their significant meals.

When asked whether other people gave her father a hard time about performing so-called women’s work, Brown scoffs at the idea.

“I can’t ever imagine anyone giving my father any problems,” she says, adding that even now, she and her siblings have what they call “the Daddy standard.”

“No matter who it is we are doing something for, he’s still the standard for approval,” says Brown. She adds that her mother instilled in her children a belief that there was nothing they could not do.

“No is not an acceptable response,” Brown says, “and you don’t get rewarded for not doing well.”

That’s a sentiment she’s passed on to her own child, Dijaun Brown, and a growing group of other children. When Brown travels for ABA-related work, she tries to visit Boys & Girls Club locations, usually accompanied by Young Lawyers Division members. At the 2015 midyear meeting in Houston, she brought children from the local chapter with her to various events.

Brown first started college at Howard University. She was a member of the Delta Sigma Theta sorority and thought she’d be a social worker. But her roommates at Howard were studying to become lawyers, and she changed her mind. She decided to pursue law, thinking that it would allow her to bring more change while helping people.

Brown received a full scholarship to Seton Hall University School of Law and graduated in 1976. Her first job out of law school was with a New Jersey steel company, doing health and pension plan work. Brown later became an in-house counsel with Prudential Insurance Co., and went on to open her own law firm, focusing on employment, civil rights and product liability work.

“What worked well for me was that I talked to anybody and everybody, without knowing what they did,” Brown says when asked about business development.

Brown routinely reaches out to people she doesn’t know, and often offers help, says Sherry Hutchins-Henderson, a New Jersey state court judge. Her mother met Brown at a hair salon when Hutchins-Henderson was a student at Howard University School of Law.

“She said to my mother, voluntarily, ‘Tell your daughter to call me, and I can give her some pointers about how to approach the New Jersey bar,’ ” Hutchins-Henderson says. “People are always saying ‘Tell them to look me up.’ When Paulette says something like that, she really means it.”

Today the women are close friends. If you tell Brown something in confidence, Hutchins-Henderson says, you can count on her to keep the information confidential. And if Brown is behind you on something, she adds, you have her full support.

“I think Paulette has been involved in some individuals getting certain positions, and maybe at times they were not the front-runner. Paulette will stand by someone if she thinks they are capable and worthy of the position,” Hutchins-Henderson says. “If she’s with you, she’s with you.

“And if she’s not, she will let you know. She does not sugarcoat things. Paulette is going to give it you, whether you want to hear it or not,” Hutchins-Henderson adds. Eileen Letts, a co-managing partner at Chicago’s Greene and Letts, got to know Brown through the Litigation Section.

“She’s intense, very bright and she has an excellent memory, which is helpful for her position as ABA president,” says Letts, who describes her friend as “opinionated” but also open to advice from others, including those who work for her.

This article originally appeared in the September 2015 issue of the ABA Journal with this headline: “Battling Bias: Paulette Brown brings passion for inclusion to her role as the first woman of color to lead the ABA.”