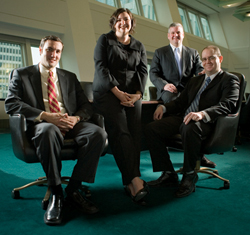 It’s not often that a lawyer asks for a $100,000 pay cut. but that’s what three idealistic young lawyers at Simpson Thacher & Bartlett chose to do. Starting this summer, first-year associates David Edwards, Serena Orloff and Jonathan Taylor will forfeit their $160,000 annual salaries to spend a year working for not-for-profit organizations on a $60,000 stipend provided by the firm.

Edwards will join the fledgling Center on the Administration of Crim­inal Law at New York University, a think tank dealing with criminal justice and government issues. Orloff will take up her post in the San Fran­cisco pub­lic defender’s office. And Taylor will take to the road in Latin America for the Rainforest Foundation U.S., working on indigenous land rights and providing a boots-on-the-ground review of the foundation’s programs in Brazil, Ecuador and Central America.

It’s all part of a fellowship program that Simpson Thacher launched in February in response to the devastating effect the economic meltdown is having on legal ser­vices and other not-for-profit organizations. With funding from the government, private foundations and IOLTAs drying up, these groups are dealing with shrinking resources even as their client pool expands.

“There are a lot of people, obviously, who have been hurt immeasurably by the econom­ic crisis,” explains William T. Russell Jr., a partner at the firm and co-chair of its pro bono committee. “They need the services of these organizations.”

Some, like Sidley Austin and Ropes & Gray, are covering health benefit costs for their associates now working for nonprofits. Many others, including Goodwin Procter, have offered stipends to associates who agree to defer their start dates and work for public interest groups.

The Simpson Thacher program initially offered 15 fellowships to associates willing to leave the firm for a year and work for not-for-profits. The lawyers will not be employees of the firm during the year but will receive health benefits. The program was later extended to incoming associates as well, and by mid-April, 26 lawyers had been awarded fellowships, including Edwards, Orloff and Taylor.

All three jumped at the chance to do public service work while keeping their ties to Simpson Thacher. Taylor, who holds a masters in international relations, says he had been scouting around for ways to apply his interests in human rights and development in Latin America. “Then I got this e-mail about the fellowship and there was all of a sudden a big way I could do it.”

Edwards says that while he enjoyed the intellectual challenge of working at Simpson Thacher, he is also “very fascinated by government and how law interacts with people.” At the Center on the Administra­tion of Criminal Law, he says, he will get the chance to work on public policy and write amicus briefs for the U.S. Supreme Court.

Orloff sees the fellowship as a “tremendous opportunity” to give back to the San Francisco community. “There’s a lot of homelessness and a lot of petty crime and a lot of people who need representation,” she says. Orloff also expects to gain critical litigation skills representing indigent clients in court. “It just seems like a win-win situation.”

But what about the money? “Sixty-thousand a year is a very comfortable salary,” she says firmly. “My dad was saying that I’m lucky I didn’t buy a house or a fancy car. I don’t have a family or dependents, so this is really the time to do it.”

“It’s all a trade-off,” edwards says. while he admits money was a consideration, he balanced it against the chance to gain skills and experience. Taylor notes that, given the difference between the cost of living in Man­hat­tan and in Latin America, for him the trade-off “while real, is not huge.”

And despite the surge in layoffs at many top law firms, all three are confident their jobs at Simpson Thacher will be waiting for them when the year is up. Not only have they received repeated assurances from the firm (“over and over and over,” quips Harlene Katzman, the firm’s pro bono counsel), but they are convinced their newly acquired skills and experience will make them even more valuable to the firm.

Russell insists the fellowship program is intended to help the nonprofit community, not to reduce the firm’s head count during the recession. But some firms enduring declining billable hours are using public interest placements to defer incoming associates or to provide transitional placements for laid-off lawyers, says Esther Lardent, president of the Pro Bono Institute in Washington, D.C., and a member of the ABA House of Delegates representing the National Legal Aid & Defender Association. She cautions that the arrangements can be complicated. Details must be worked out as to who will supervise the lawyers and how they will receive benefits.

And some nonprofits may not have the resources, or even the physical space, to use the associates effectively, says Chicago lawyer Gregory McConnell, a member of the Leadership Council of the Association of Pro Bono Counsel. He suggests law firms might need to kick in additional financial support to make these arrangements work.

The association has convened conference calls for representatives of law firms and legal services to thrash out some of these matters. Both the as­so­ciation and the Pro Bono Institute have issued guidelines for public interest placements.

Still, the enthusiasm of Edwards, Orloff and Taylor suggests these placements may be well worth the trouble. “Every single one of my friends who works at a law firm has said, ‘Wow! I wish my firm were doing this. I would love it!’ ” says Edwards.

Previous:
Pensions Howling at The Door