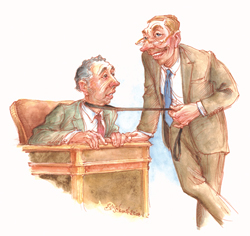 When the bar association held its next evening program—on direct examination—there was professor Vince Warbler from the law school waiting at the front door when Angus, Judge Standwell and I arrived.

Warbler pulled me aside before I could even walk into the room. “How much are Angus and the judge getting to do these programs?” he said, his eyes open wide.

“Well, what about sharing your notes with me?” said Warbler.

“Sorry,” I said, “but maybe you could get reprint permission from the bar association newsletter.”

Warbler actually harrumphed as he stormed out of the building. I just had time to get a cup of coffee and a blueberry scone before Angus started the program.

“Legalese is a poisonous set of verbal habits that we unconsciously turn on or off, depending on where we are and what we’re doing,” said Angus. “It’s the curse of a traditional legal education. And when we’re in court—which seems like the most obvious place to sound like a lawyer—it creates all kinds of problems.

“Ask a stiff question and you’ll get a stiff answer.

“Here’s the secret for both effective writing and speaking:

“When you prepare for trial, don’t write out your questions. They’ll sound stiff and unnatural when you read them out loud. Instead, write down the answers you’re looking for on the right-hand side of your outline, leaving the left side of the page for occasional notes and reminders. That system forces you to ‘free-form’ your questions to get the information you need. It makes everything sound more natural, including the witness’s answers.

“Keep your questions short and simple. Take ad­vantage of context. You do not need to recapitulate the witness’s previous testimony as part of each new question.

“ ‘Why?’ is a great follow-up question to ask on direct. The question you should never ask on cross-examination will get useful, natural-sounding answers on direct.”

THE FINE ART OF LEADING

“i did a little research on this next topic,” said Judge Standwell, “checking through everything in the court’s library as well as in my own books. And I am pleased to report that asking witnesses leading questions on direct examination is not listed anywhere as one of the seven deadly sins of trial lawyers.

“Rule 611(c) of the Federal Rules of Evidence doesn’t take us much further. It just says, ‘Leading questions should not be used on the direct examination of a witness except as may be necessary to develop the witness’s testimony.’ And it says you can lead hostile or adverse witnesses anytime.

“But Rule 611(c) doesn’t tell you about all the times when you can lead your own witnesses. And what most practice books don’t tell you is how mastering the art of asking permissible leading questions will make all of your direct examinations smoother, easier to follow and more conversational.

“But since we didn’t know that, we all got out of law school thinking that asking leading questions on direct examination really is one of the seven deadly sins of trial lawyers.

“Enter the fine art of leading. First, don’t start any direct examination by asking questions that sound like a heartless bureaucrat in a Franz Kafka novel: ‘Would you state your full name, spelling your last name for the benefit of the court reporter? Directing your attention to the 17th of May, 2007, would you indicate what, if anything, you were doing with respect to … .’

“Instead, start with a few friendly leading questions:

“ ‘Your name is Martin Drewek?’

“ ‘Yeah, so far, but times are getting tight. Some of my friends at other shops have already been cut down to 10 or 15 hours a week.’

“Here is where you just give an understanding nod and go on to the case at hand. ‘Mr. Drewek, you un­derstand that this lawsuit is about a brand-new build­ing that collapsed in downtown Cleveland on April 3, 2007?’

“ ‘Absolutely,’ says Drewek. ‘I was less than a block away when it started to fall.’

“And here,” said Judge Standwell, “is where you stop leading, switch to the present tense—just to help make it come alive—and say, ‘Mr. Drewek, tell us what you see as the building starts to fall.’

“ ‘The whole front of the building—all eight stories—starts to crumble and fall into the street.’ ”

“Can you do that?” said Maria Archuleta, who was in the third row.

“There is no rule against asking questions in the present tense,” said Judge Standwell, “and it sure makes the answers come alive.

“Back to creative leading,” he said. “It’s a great way to introduce an expert witness—with five or six minutes of nice, tight leading questions from you instead of 25 or 30 minutes of painful self-aggrandizement from your expert. Juries constantly tell me they get sick of listening to what they call ‘overpaid blowhards bragging about themselves.’

“After you qualify your client’s medical doctor as an expert, it’s time to turn him into a teacher with the verbs you use in your questions: ‘Dr. Williamson, we need you to teach us about the heart. Could you tell us what is meant by a “myocardial infarction”?’

“ ‘A myocardial infarction is doctor talk for a heart attack. It means that part of the heart actually dies,’ says Dr. Williamson. ‘Usually it’s caused by a lack of blood flowing to that part of the heart. That’s what happened to Mrs. Johnson. And when her heart healed over time, it was left with a scar that permanently impairs how well her heart can pump blood throughout the body.’

“That’s when the jurors all start wishing their doctors were as good at explaining things as your witness is.”

THE STORY METHOD OF DIRECT

“You’re a teacher on direct examination,” said Angus. “You’re teaching the judge and jury the facts of your case through the witnesses’ stories. But subtly—not like a flamboyant symphony conductor, standing on a podium in front of everyone, conspicuously directing all of the musicians through their parts.

“Do it well and you will seem to disappear during direct examination as the jury becomes locked in on what your witnesses are saying.

“Use topic sentences to orient everybody. They keep the judge and jury on track while helping your witnesses to know what’s expected of them.

“Where you start each witness’ story is one of the most important decisions you can make,” said Angus.

“One of the most exciting direct examinations I ever saw was conducted by Keith Roberts from Wheaton, Ill., as part of a trial advocacy program. Roberts was representing the ‘defendant’ in a criminal assault case and decided to put his client—let’s call him Jesse Nolan—on the stand as his first witness.

“But instead of starting with the usual routine of trying to make the criminal defendant look like a useful citizen, Roberts went straight to what the jury wanted to hear.

“His first question was, ‘Jesse, do you understand the nature of the charges this man has brought against you?’ Notice the leveling effect of that question. It’s no longer State v. Nolan but This Man v. Jesse.

“ ‘I guess so,’ said Jesse. ‘He claims I attacked him in some alley down near the docks.’

“ ‘Jesse Nolan,’ said Roberts, ‘is that true? Did you attack and rob this man in the alley outside the Seaman’s Cove on Aug. 3?’

“ ‘Absolutely not!’ said Jesse. ‘I would never do a thing like that. I’ve never seen that man before this case started and I was nowhere near the docks on Aug. 3.’

“ ‘Jesse,’ said Roberts, ‘we’re going to have you tell us about where you were and everything you did on Aug. 3, but first I want you to tell us a little about you.’

“Keith Roberts understood that the most powerful place to put a denial is up front,” said Angus, “not buried in the middle.”

From the rear of the room I heard someone say “Humbug,” and there was Professor Warbler, walking out the back door.