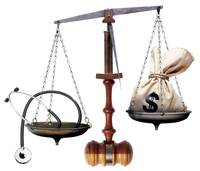 Chicago lawyer Richard H. Donohue can’t figure out just what it would take to install and keep damage caps in the Illinois judicial system. He doubts even the power of prayer will help.

“Pick your deity,” he says. “Buddha, Allah, Muhammad, Moses or Jesus Christ, or whoever you believe in, could not get a damage cap in the state of Illinois.”

Donohue was fresh off the third defeat in the Illinois Supreme Court since the 1970s for tort reformers defending damage caps imposed by legislators. On Feb. 4, in Lebron v. Gottlieb Memorial Hospital, the court unscrewed the state’s 2005 lid on noneconomic damages—sometimes called pain and suffering—in medical-malpractice cases.

As a result, Donohue’s physician client, Dr. Roberto Levi-D’Ancona, saw his potential exposure to damages exceed the $500,000 limit set by legislators. Frances Lebron says Levi-D’Ancona botched the 2005 cesarean section delivery of her daughter Abigaile, leaving her with severe brain damage and cerebral palsy. And Gottlieb Memorial, a suburban Chicago hospital, is no longer protected by a $1 million legislative cap.

In a 4-2 vote, the justices held that the cap violated the state constitution’s separation of powers, robbing the courts of the judicial tool of remittitur, which judges can use to reduce jury awards deemed excessive.

Lead plaintiffs lawyer Jeffrey M. Goldberg of Chicago estimates that a malpractice case can cost up to $300,000 to pursue, which lawyers often have to recoup from capped noneconomic damages, further reducing awards to patients. None of the widely differing state malpractice systems or proposed federal restrictions on litigation affects compensatory damages, though health insurance companies would be first in line in front of patients for whom they had paid medical bills.

“A cap would make some cases so marginally recoverable that you can’t afford to take them,” Goldberg says. “There are many cases that can’t be prosecuted because of the cap.”

The ABA, which has long opposed caps, filed an amicus brief supporting the plaintiffs.

The Illinois Supreme Court cited 18 states with damage caps, from a low of $250,000 to a high of $1.5 million. In March, that number dropped by one when the Georgia Supreme Court unanimously struck down the state’s med-mal limits, saying the $350,000 cap on non economic damages violates the right to a jury. The ruling, which set back part of Georgia’s 2005 tort reform law, upheld an award of almost $1.3 million to a Marietta woman disfigured after a face-lift.

“The fear of litigation impacts the practice of medicine,” says Dr. J. James Rohack, the American Medical Association’s president and a cardiologist from Temple, Texas. “How much of the health care dollar do we put into health care instead of moving it into the legal system? We need to do something to find alternatives if we don’t have damage caps.”

Though the Illinois decision alone may do little to influence the debate over national health care reform, one unusual aspect of that state’s judicial system drives home the political division that has marked the larger discussion. Of the 38 states that select judges through some form of election, Illinois is one of only seven that stage partisan elections.

In 2004, in the state’s last contested supreme court race, Republican Lloyd A. Karmeier defeated Democrat Gordon Maag. The candidates together raised $9.3 million in a race that was billed as a referendum on tort reform and at the time became the nation’s most expensive state high court race ever.

Maag drew most of his contributions from a core constituency of plaintiffs lawyers. Karmeier’s $4.8 million share largely came from business interests and their lawyers, as well as State Farm Mutual Auto Insurance Co. and Philip Morris Inc., which had cases coming before the court. After the election, Karmeier voted to reverse judgments of $1 billion each against the insurer and the cigarette maker.

Even veteran litigators were alarmed, though, by Karmeier’s partial dissent in Lebron, in which he invoked a speech by President Barack Obama, warning of disaster should Congress fail to act on health care reform. Fellow Republican Justice Rita B. Garman joined Karmeier, while the court’s third Republican, Robert R. Thomas, recused himself.

“Although [Obama’s] proposal focused on expanding health insurance coverage, he also recognized that reform of medical-malpractice laws might aid in reducing our nation’s health care costs, while also improving the quality of care delivered by physicians and received by their patients,” Karmeier wrote.

Illinois legislators did just that, he maintained, by enacting the caps, malpractice insurance regulations and greater public access to physician disciplinary records.

Obama has expressed interest in restricting malpractice litigation, but has not supported or proposed federal caps. Those remain a Republican proposal.

“It’s an issue because the Republicans keep making it one,” says Peter J. Flowers, president of the Illinois Trial Lawyers Association.

The Democratic majority had a different view. Chief Justice Thomas R. Fitzgerald sternly rebuked Karmeier, reminding him that the case was decided under the state constitution, not “against the back-drop” of federal efforts.

“We do expect that our disagreements will focus on the legal issues, providing a level of discourse appropriate to the state’s highest court,” Fitzgerald wrote. “The emotional and political rhetoric that peppers the dissent is ill-suited to this pursuit.”

Another Lebron plaintiffs lawyer, Robert S. Peck of Washington, D.C., says he has not encountered similar language in decisions or arguments from other states.

The Illinois reform measures also put state Attorney General Lisa Madigan in a tough spot. In an effort to win support from affected stakeholders with opposing interests, legislators wedded the fates of damage caps, insurance regulation and physician discipline in a single bill—making individual sections unseverable. But they had done so with little or no public input or scrutiny, physicians included.

Nonseverability meant when the damage caps went, so did the insurance and disciplinary sections. Since neither of those measures provoked the level of con troversy that caps did, the attorney general’s office took a chance and defended sections of the law that weren’t at issue before the justices.

“Alongside massive changes in malpractice insurance regulation and several litigation reforms … these new provisions form part of a comprehensive multidimensional approach to a recognized crisis in Illinois health care,” Madigan had argued to the state’s highest court.

Madigan’s office would not comment, but as far as the court’s majority was concerned, the attorney general took her eye off the ball.

“Just because the legislature votes on something doesn’t make it constitutional,” says plaintiffs lawyer Goldberg. “But that’s what everybody always argues.”

Though malpractice insurance premiums are holding steady or even dropping slightly by now, research suggests that the malpractice conundrum represents only a hair of the nation’s spiraling health care expenses.

In a study last October, the Congressional Budget Office estimated that malpractice liability, including insurance premiums, settlements and awards, would reach $35 billion by the end of 2009, or about 2 percent of the nation’s total spending on health care. A 10 percent drop in malpractice premiums would translate to a savings of about 0.2 percent.

Add in more spending cuts accomplished through a package of reforms—including damage caps ranging from $250,000 to $500,000—and total spending drops by about $11 billion, or 0.5 percent. And much of that comes from cuts forced on Medicare, Medicaid, government-supported care for children and federal employee health benefits.