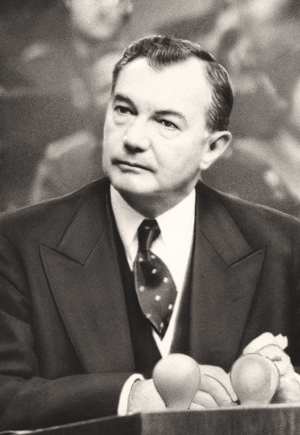 This year marks two important anniversaries concerning the great Justice Robert H. Jackson: Seventy-five years ago, in 1941, he took his seat on the U.S. Supreme Court; and 70 years ago he was on sabbatical from the court to serve as chief counsel for the United States in the prosecution of senior Nazi officials at Nuremberg. This month, the Center for American and International Law in Dallas is hosting a symposium—one of many around the country—to assess the significance of those postwar prosecutions. Much of the interest and energy will focus on Jackson himself.

Doubtless because Jackson was so unusually eloquent, a majority of the current justices name him as their favorite writer ever to serve on the court. Let’s see why. We’ll primarily consider two documents: his majority opinion in West Virginia State Board of Education v. Barnette and his opening and closing arguments at Nuremberg. There are countless other examples you might seek out as well.

Barnette was decided in June 1943. The United States was embroiled in World War II. It was a time when worries, fears and patriotism ran high. In this atmosphere, the West Virginia board of ed, emboldened by a 3-year-old opinion of the court (Minersville School District v. Gobitis), passed a resolution requiring all children to salute the flag and recite the Pledge of Allegiance. A group of Jehovah’s Witnesses objected that their civil liberties had been infringed, and they sued.

The Jackson opinion for the majority is a thing of beauty. It’s rather like Shakespeare’s Hamlet: Almost every line is quotable. In the eight-page opinion, Jackson quotes very little and cites only two cases. The opinion reads like one of the most powerful essays you’ll ever see.

After explaining the petitioners’ basic objection to the flag salute and pledge, Jackson coolly sets forth the consequences: “Failure to conform is ‘insubordination’ dealt with by expulsion. Readmission is denied by statute until compliance. Meanwhile, the expelled child is ‘unlawfully absent’ and may be proceeded against as a delinquent. His parents or guardians are liable to prosecution and if convicted are subject to fine not exceeding $50 and jail term not exceeding 30 days.”

A preliminary question in the case was whether the pledge is a form of speech protected by the First Amendment. Yes, wrote Jackson: “There is no doubt that, in connection with the pledges, the flag salute is a form of utterance. Symbolism is a primitive but effective way of communicating ideas. The use of an emblem or flag to symbolize some system, idea, institution or personality is a shortcut from mind to mind. ... A person gets from a symbol the meaning he puts into it, and what is one man’s comfort and inspiration is another’s jest and scorn.” The paragraph is refreshingly free from citations to authority. None were needed.

The 1940 Gobitis decision had suggested that the flag-salute controversy confronted the court with “the problem which Lincoln cast in memorable dilemma: ‘Must a government of necessity be too strong for the liberties of its people, or too weak to maintain its own existence?”

Jackson’s answer amounted to a blast: “It may be doubted whether Mr. Lincoln would have thought that the strength of government to maintain itself would be impressively vindicated by our confirming power of the state to expel a handful of children from school. Such oversimplification, so handy in political debate, often lacks the precision necessary to postulates of judicial reasoning. If validly applied to this problem, the utterance cited would resolve every issue of power in favor of those in authority and would require us to override every liberty thought to weaken or delay execution of their policies.” Again, not a single citation of anything—just close analysis of the issues.

You’ll have noticed by now that Jackson used words really well. (Please don’t write to me about the restrictive whiches where we’d prefer thats. He had a foible.) His verbs, his nouns and even his adjectives are fresh and bold: “That [boards of education] are educating the young for citizenship is reason for scrupulous protection of constitutional freedoms of the individual, if we are not to strangle the free mind at its source and teach youth to discount important principles of our government as mere platitudes.”

One of his most memorable phrases was a literary allusion deriving from Thomas Gray’s “Elegy Written in a Country Churchyard” (1751). But you needn’t even know the poem to get the point. The allusion appears in the second sentence here: “The action of Congress in making flag observance voluntary and respecting the conscience of the objector in a matter so vital as raising the Army contrasts sharply with these local regulations in matters relatively trivial to the welfare of the nation. There are village tyrants as well as village Hampdens, but none who acts under color of law is beyond reach of the Constitution.”

In his tight essay, Jackson expresses truths that seem prescient today: “One’s right to life, liberty and property, to free speech, a free press, freedom of worship and assembly, and other fundamental rights may not be submitted to vote; they depend on the outcome of no election.” Or this haunting image (remember it was 1943, and nobody in America knew anything about the horrifying extent of Hitler’s death camps): “Those who begin coercive elimination of dissent soon find themselves exterminating dissenters. Compulsory unification of opinion achieves only the unanimity of the graveyard.”

Jackson reminded his readers from time to time of his lawyerly credentials. He liked the word therein. But notice how he could be eloquent even with that smidgin of legalese: “If there is any fixed star in our constitutional constellation [note the alliteration], it is that no official, high or petty, can prescribe what shall be orthodox in politics, nationalism, religion or other matters of opinion, or force citizens to confess by word or act their faith therein. If there are any circumstances which permit an exception, they do not now occur to us.”

Small wonder that many constitutional scholars consider Barnette their favorite majority opinion of all time.

Justice Felix Frankfurter, by contrast, wrote a long and quotation-filled dissent in which he begins defensively: “One who belongs to the most vilified and persecuted minority in history is not likely to be insensible to the freedoms guaranteed by our Constitution.” He alone wanted to enforce the expulsions from school. It was not his best moment—and, in fairness, we should note that his career was full of excellent moments.

But back to Jackson. When necessary to avert immediate dangers posed by those exhorting violence, he was ready to grant government the power of intervention. In a 1949 case, he dissented from a decision overturning the breach-of-peace conviction of a former priest whose incendiary pro-fascist and anti-Semitic rhetoric had provoked two mobs to clash. Citing the necessity of public order, Jackson warned in his dissent: “If the court does not temper its doctrinaire logic with a little practical wisdom, it will convert the constitutional Bill of Rights into a suicide pact.” Again, his clarion, pithy insights are enduringly relevant.

In 1945–46, when he took leave from the court to prosecute war crimes in Germany, some of his colleagues were unimpressed. Chief Justice Harlan Fiske Stone thought the Nuremberg trials amounted to a fake show of victors’ justice. He said privately: “Jackson is away conducting his high-grade lynching party in Nuremberg.”

But in his opening statement, Jackson delivered some of the most powerful words ever uttered in any courtroom: “The wrongs which we seek to condemn and punish have been so calculated, so malignant and so devastating that civilization cannot tolerate their being ignored because it cannot survive their being repeated. That four great nations, flushed with victory and stung with injury, stay the hand of vengeance and voluntarily submit their captive enemies to the judgment of the law is one of the most significant tributes that power has ever paid to reason.”

This article originally appeared in the October 2016 issue of the ABA Journal with this headline: “Powerful Eloquence: Celebrating the words of Justice Robert Jackson.”

Bryan A. Garner, the president of LawProse Inc., is the author most recently of "Garner's Modern English Usage," "The Chicago Guide to Grammar, Usage, and Punctuation" and "Guidelines for Drafting and Editing Legislation."

Next:
Litigator's book documents the service of Kansas' Frontier Guard to President Lincoln