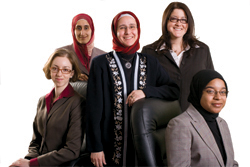 In an unassuming office park in a quiet Chicago suburb, six lawyers are planning a revolution. The six are American women of the Muslim faith, and they have started what they believe is a first-of-its-kind law firm. They hope to change the way others think about their religion and culture, as well as the way law can be practiced.

“The pictures you see in the media of Muslim wom­en are of very shrouded, very oppressed women,” says Janaan Hashim. “That is not us … not what our faith advocates. We have a great opportunity to overcome the odds in a very pluralistic, very accepting society.”

Launched last fall, the Amal Law Group in Palos Heights, Ill., is named after the Arabic word for hope, the partners say. The firm represents their hope for themselves and their community. “Today the word Muslim has a very negative conno­tation, and we are trying to overcome that,” Hashim says.

Much like the varied ethnicities of Amal’s partners, a variety of matters are handled by the firm, including criminal defense and business law. While they don’t exclusively cater to Muslims, the partners say their combined knowledge of American jurisprudence and Islamic law and culture has created a demand for their services in their growing Muslim community.

“If clients have the option to do it in a Shariah-compliant manner, they want it,” say Maryam Khan. Shariah combines legal principles derived from the Quran, the teachings of Muhammad and interpretations of those teachings by Islamic jurisprudential scholars. It’s perhaps most recognizable as a factor in financial transactions because Islam prohibits charging interest, but the Amal women apply Shariah more often in family law situations, like drafting estate planning documents recognized under Islamic and Illinois law.

Sharing a religious connection not only brings in this business but eases workplace pressures. Majdel Musa points out that they can maintain their cultural identity without worrying about drinking alcohol at social events or dressing a certain way. Indeed, four of the six wear traditional Muslim headscarves.

And they are striving to break down another workplace barrier: creating a flexible, family-friendly environment. Children are welcome and can often be found in the office (five of the six lawyers are mothers). All six are free to maintain their own hours and work where they are most effective, be it telecommuting at midnight or working 9 to 5.

“We feel no pressure to conform to anyone’s ideal of a lawyer,” Musa says.

Except, of course, their own.