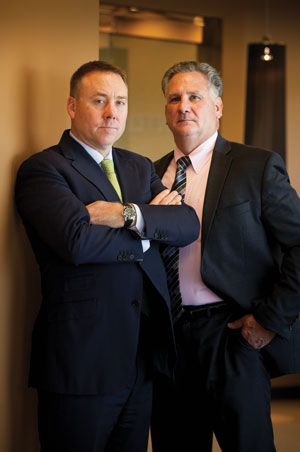 America's heroin problem is hardly a secret anymore. Broached in the New Hampshire presidential primary, heroin addiction has been a subject for newspapers, magazine articles, television shows and books.

Brad Koffel could probably write a book of his own. The Columbus, Ohio, defense attorney has handled hundreds of drug cases and has been working with drug addicts for more than two decades.

With the help of former Franklin County “drug court” judge Scott VanDerKarr, Koffel is pioneering a new practice group within his traditional criminal law practice. He calls it “preventative law,” an effort to get juveniles and young adults help at the first sign of drug trouble.

The new drug epidemic is different from any seen before. Fueled by heroin supplies flowing out of Mexico, the demand is created by the widespread use of powerful opioid pain narcotics. Once the pharmaceutical painkiller becomes unavailable or too expensive, dependent users can turn to heroin.

Once addicted to opioid pain medication, VanDerKarr says, a young person can hook up with “heroin coming in from Mexico, being delivered for less than a pizza—$10 for a small hit of heroin.”

“More males than females get involved, but plenty of females are abusing heroin, even in high school,” he says. “There are as many female athletes as male athletes who get injured and move from pain pills to heroin, but just as many go from alcohol to weed to pills to heroin. This is happening in affluent neighborhoods.”

In Ithaca, New York, the situation has become so bleak that in February the mayor endorsed a plan that includes giving addicts access to free heroin. That plan is still under consideration.

Koffel’s new program is designed to catch and rehabilitate young adults before it’s too late. By early May the program had 32 clients, and it was adding two clients a week.

“My 22-year-old nephew died of a heroin overdose on Labor Day 2014, right under my nose,” Koffel says. “He died when his heroin was cut with fentanyl, a heavy-duty narcotic more powerful than heroin. That was a major blow.

“Drug court is awesome,” Koffel says, “but why were we waiting for them to get arrested?”

Part of the difficulty in getting young addicts help, Koffel says, is “an insulated family system that likes to put up the veneer of the perfect American household. Go to Google and you get a lot of rehab centers that aren’t interested in insurance money; they just want cash. So [the family] spends $11,000 and their child comes back with no after-care education and they relapse immediately.”

“Let’s say we have a client who pleads guilty to a drunk driving case,” Koffel says in explaining his preventive practice. “We have them assessed for mental health, and use that as an opportunity to get into their cellphones and survey what they’re doing. We use a misdemeanor to poke a peephole into their lives. If it’s a felony, we use that opportunity to make wholesale changes.”

“We want to use the courthouse before they get too far down the road,” Koffel says. “Then they get an intervention team with random drug testing, mentors, get on Vivitrol [naltrexone]—an opiate antagonist that blocks the pleasurable effect, reducing the craving—and cognitive behavioral therapy.” Clients are put in contact with a psychiatrist, “and [we] put GPS on their cars because we want to know where they are.”

VanDerKarr gained recognition by giving drug offenders a second chance through a special docket he maintained of about 200 addicts. He met with defendants personally, focusing on treatment rather than sentences. VanDerKarr referred addicts to agencies and treatment providers, and he achieved a 70 percent graduation rate, meaning that addicts were clean for roughly one year.

“The idea is to get to somebody before they do any type of criminal activity, where they are just beginning to exhibit behavior,” says VanDerKarr, who now works for Koffel’s firm. “We have an accountability contract, with treatment and follow-up. I’m a big believer in [Narcotics Anonymous and Alcoholics Anonymous] treatment and after-treatment, because people fall down after treatment when they think they have a hold on things, so there’s accountability before and after treatment.”

VanDerKarr thinks society is beginning to “get it” about drugs.

“Sometimes the media gets it before the general public says, ‘This is a real problem; this could really be my child,’ ” VanDerKarr says, “especially in suburbia where people think ‘not in my neighborhood.’ “

Liz Casto’s son Tyler is a client of Koffel’s and is currently in a drug rehab program in Georgia.

“He was arrested in August for possession of marijuana and OxyContin pills,” she says. “He was speeding, which prompted officers to stop him.”

Tyler had a court date on Jan. 12, but he suffered from high anxiety, Casto says, and knowing he was going to get probation, he “freaked out and started using more frequently.” In December, Koffel suggested talking to an educational placement specialist for Tyler.

The specialist recommended Second Nature, a wilderness drug program operated in the Blue Ridge Mountains. “There are no communications except for letters; it’s pretty intense,” Casto says. The overall goal is to keep Tyler sober for a year, then take him to court.

“The prosecutor is working with Brad, saying, ‘We’re glad he’s safe and sober. Let us know when you need to come back to court.’ Brad negotiated with the prosecutors for an open time frame, so when he completes the program, that’s like his probation. When he comes out, he’ll be free and clear—that’s our hope,” Casto says. “Everybody’s advice is listen to the professionals, but had I not had the resources from Brad, I don’t know what we would have done.”

None of this comes cheaply. In addition to paying the educational specialist, Casto estimates that Tyler’s time at Second Nature runs north of $40,000.

“I’m grateful we could afford it,” says Casto. “I can’t imagine what somebody who has no resources …” Her voice trails off.

This article originally appeared in the July 2016 issue of the ABA Journal with this headline: “Early Intervention: ‘Preventative law’ practice aims to stem the tide of heroin addiction.”