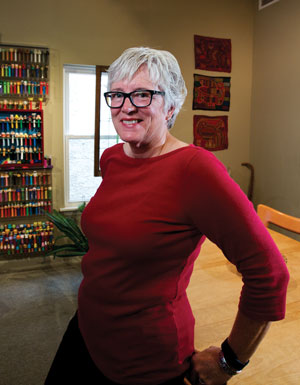 When Chicago attorney Jill Metz started practicing as a solo attorney in the early 1980s, she decided she would always make time to do pro bono work.

Though she needed to get her practice off the ground and earn a living, Metz volunteered five to 10 hours a week for the People's Law Office in the Uptown neighborhood, doing criminal defense work and housing law for the mostly poor clientele.

Recent news stories have exposed that major law firms donate only 0.1 percent of their proceeds to legal aid for low-income people, making the contributions by lawyers like Metz even more crucial for impoverished clients.

Metz has always felt strongly about using her skills as a lawyer to do more than make a living. “It’s a choice,” she says. “I think being a lawyer is a real privilege. People trust us with their money. They trust us with their cases. Given this privilege, we have an obligation as lawyers to do that, and not just let it be all about business.”

Metz, who now has a small firm with four lawyers, still devotes about three to seven hours a week to pro bono work, using her specialty in family law to work for individual clients as well as for larger causes such as gay marriage, which she has done through volunteering with the American Civil Liberties Union.

“It’s so rewarding and so satisfying,” she says. “You just find the time. If you have huge financial burdens, it’s harder. The rewards are exponentially greater.”

SATISFACTION AS A REWARD

Large firms may have the staff and financial stability to allow their lawyers the time to do such work, but solos are making the time and reaping the rewards in both experience and personal satisfaction.

“For a lot of the newer lawyers, they’re looking for the skills they need to be solo practitioners,” he says.

Once solos have established themselves, Marchese says, it makes sense to offer pro bono services in their areas of specialty rather than to test the waters in other areas. “They also have to ask whether they have the revenue stream to do it,” he says.

The Chicago Bar Foundation helps connect lawyers who want pro bono work with the right assignment, depending on areas of expertise and the number of hours they can devote.

“We have people doing everything from working at a legal help desk to complicated cases,” says Kelly A. Tautges, the foundation’s director of pro bono and court advocacy.

The National Pro Bono Opportunities Guide—sponsored by the ABA and Pro Bono Net—allows users to search for a project by area of law or for one serving a specific population, such as children, seniors or immigrants.

Kristopher Kest, an Orlando, Florida-based family law attorney, went solo this spring after spending 10 years working for a large firm where he began doing pro bono work, mostly serving as a guardian ad litem for children in cases of abuse and neglect.

Now that he’s on his own, Kest has no intention of giving up what he considers important work.

“I don’t have any idea what kind of economic impact it will have on my career in the solo world,” he says. “I certainly have no doubt that it will add more hours. If it were a huge burden that didn’t have some feel-good aspect to it, I probably wouldn’t do it.”

Kest says there was never any doubt he’d do pro bono work. Both his parents, who had a small practice and are now circuit court judges in Florida, instilled those values.

“As cliché as it sounds,” Kest says, “it does feel good to be giving back and helping people who otherwise wouldn’t be able to get help.”

This article originally appeared in the September 2015 issue of the ABA Journal with this headline: “For Good: Pro bono gives solos experience—and satisfaction.”