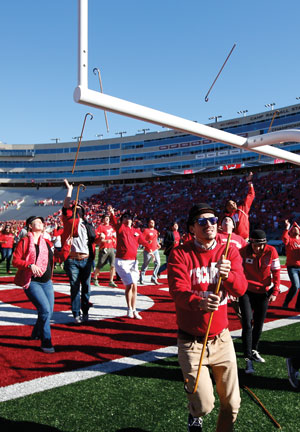 Third-year University of Wisconsin law students participate in the annual cane toss. Tradition says those who catch their cane will win their first case. Getty Images.

Law schools could be at greater risk of losing their good standing under a pair of proposed changes in the ABA’s accreditation standards that are now being circulated for public feedback.

One proposal would tighten and simplify the existing requirement that sets levels at which a law school’s graduates must pass bar exams for the school to retain its accreditation. The other proposal would create a new means of enforcing the requirement that a law school only admit applicants who appear capable of completing its educational program and being admitted to the bar.

The two proposals are part of an effort to address concerns raised by the nationwide drop in bar passage rates over the past two years. Some experts in the field have questioned whether some schools may knowingly be admitting students who stand little chance of graduating or passing a bar exam.

The measures are part of a package of proposed changes in the ABA Standards and Rules of Procedure for Approval of Law Schools put out for notice and comment in March by the council of the Section of Legal Education and Admissions to the Bar. The council is designated by the U.S. Department of Education as the national accrediting body for programs leading to a JD degree. The proposals were drafted by the Standards Review Committee at the request of the council.

The council is soliciting written comments on the proposed changes until July 29. A public hearing on the proposals is scheduled for Aug. 6 during the ABA Annual Meeting in San Francisco.

The proposed changes will likely come back to the council for final consideration at its October meeting in Chicago. If approved at that time, they would probably be presented to the House of Delegates in February at the ABA Midyear Meeting in Miami. The House may either concur with the proposed amendments to the standards or refer them back to the council for reconsideration, but the council has the final say on any changes.

KEEPING UP WITH THE PACK

The bar pass proposal is intended to simplify and strengthen the current standard, which critics have long contended is too convoluted and too full of loopholes to be very effective.

The proposed change would eliminate the first option altogether. It would keep the 75 percent passage-rate requirement in the second option, but would shorten the time frame for demonstrating compliance with the standard from five to two years. The proposal also would no longer permit a school to base its bar passage rate on the basis of only 70 percent of its graduates. Instead, it would require schools to account for as many of their graduates as possible.

The second of the two proposals would create a rebuttable presumption that a law school with an attrition rate above 20 percent (not including transfers) is not in compliance with the requirement that it not admit students who do not appear capable of graduating and passing the bar.

The current standard states that a school’s academic attrition rate is one factor to be considered in assessing whether that school is complying with the standard, but it sets no specific number. The average attrition rate for all schools last year was 6.92 percent. But 15 schools had attrition rates higher than 20 percent. Third-year University of Wisconsin law students participate in the annual cane toss. Tradition says those who catch their cane will win their first case.

This article originally appeared in the June 2016 issue of the ABA Journal with this headline: “Numbers Count: Proposals to amend accreditation standards would require law schools to put more focus on graduates’ bar passage rates.”