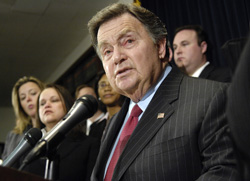 New York City police arrested 19-year-old Elisaul Perez in March 2009 and charged him with assaulting a man and stealing his iPod. The officers brought Perez from the precinct to central booking, a holding area in the Queens County courthouse basement, where charges were drawn up.

Under the Miranda rule, in order to keep police and prosecutors from improperly obtaining a confession, law enforcement officials aren’t allowed to question criminal suspects in custody until they’re told of their rights to have a lawyer and to remain silent.

But Queens district attorneys added something else. Before Perez was arraigned and assigned counsel, he was taken to an interrogation room in central booking to be questioned by prosecutors.

There, before prosecutors informed Perez of his Miranda rights, they told him he had “an opportunity to explain what happened.” If Perez had an “alibi,” he should give “as much information as [he] can” so investigators “can look into it,” according to a recording of the interview. The procedure is called a preamble.

“This will be the only opportunity you have to talk to me prior to your arraignment on these charges,” the detective conducting the interview told Perez.

It’s a controversial practice but one that’s become commonplace in Queens. For many years, prosecutors occasionally assisted police in interrogating suspects, but only in unusual or complex cases—and even then it was typically done at the precinct.

Borough prosecutors have interviewed more than 10,000 defendants on videotape after charges have been drawn but before arraignment, the DA’s office says.

Brown says his goal was to learn the truth about the incidents and to exonerate innocent defendants as quickly as possible. His office says that charges have been dropped in more than 100 cases and reduced in many others as a result of the interrogations.

When Perez was interrogated, he admitted assaulting the victim, adding it was in retaliation for an earlier incident that landed Perez in the hospital. Perez denied the robbery. Later, Perez’s assigned counsel moved to suppress his statement as involuntary.

Queens County Supreme Court Justice Joel Blumenfeld started the suppression hearing, but partway through he said he was going to conduct a separate inquiry into whether the DA’s pre-arraignment interrogation practice was ethical.

While Blumenfeld was considering the ethics questions in Perez’s case, three other criminal defendants asked the Appellate Division to reverse their convictions in cases where they had made statements to prosecutors in central booking.

Those cases drew amici this spring from the New York Civil Liberties Union and a wide range of defense groups. The NYCLU argues that the Queens pre-arraignment interrogation is unethical and unconstitutional, and that the prosecution’s preamble is “misleading, deceptive and designed to undercut each of the Miranda warnings.”

Critics also say the preamble doesn’t make clear that the prosecutor isn’t an ally. They argue that the prosecutors give defendants the impression that they must provide their version of the incident on the spot or the authorities won’t investigate in the future. Defense lawyers also say that suspects often aren’t thinking clearly.

“Any normal layperson, especially one that’s been in jail for a day, is going to think, ‘Man, this person is going to help me get out of this problem,’ ” says Queens defense attorney Robert DiDio. “I’ve had clients actually tell me: ‘I thought that was my lawyer.’ ”

Defense lawyers add that the program is aimed at obtaining incriminating evidence. “From our perspective, those charges would all have been dropped anyway,” says Richard Willstatter, president of the New York State Association of Criminal Defense Lawyers. “We think the motivation is to acquire statements that can be used to convict people.”

In fact, many defendants talk. Statistics compiled by the Queens DA’s office reveal that between 2007 and mid-June 2012, more than 42 percent of the 10,256 interviewed made a videotaped statement about the crime, while an additional 20 percent confessed on video. One in four requested a lawyer, and 12 percent refused to make a video.

Opponents also argue that the program delays arraignments, increasing the time defendants remain in custody before seeing a judge. The interviews in Queens often don’t take place until many hours after an arrest, usually after a defendant has been up all night. Perez was arrested soon after the 12:30 a.m. incident, but he wasn’t interviewed by the prosecutor until 2:30 the next afternoon.

Civil liberties advocates additionally claim the program violates defendants’ equal protection rights because only people awaiting assigned counsel are questioned. If a defendant is wealthy enough to have his or her own lawyer, or if the family hires one, the prosecution doesn’t interrogate him.

For its part, the Queens DA argued in court papers that there is nothing coercive or threatening about the interrogations that renders statements involuntary. The DA also maintained that prosecutors never imply they’re disinterested, and that interviewers repeatedly identify themselves as employees of the DA’s office.

The Queens DA’s office argued that interviewing indigent defendants at the courthouse doesn’t violate equal protection any more than interviewing at the police precinct, where law enforcement officials interview suspects who lack lawyers, according to court papers.

In his April ruling in People v. Perez, Judge Blumenfeld weighed whether the Miranda preamble violated New York Rule of Professional Conduct 8.4(c), which requires that lawyers or law firms not “engage in conduct involving dishonesty, fraud, deceit or misrepresentation.”

He found the preamble “misleading and deceptive” because the DA’s office never followed up on its promise to Perez to investigate his story.

Blumenfeld ultimately ruled that Perez’s statement was voluntary, but he also said that the prosecutor’s office acted unethically because the preamble “misleads a defendant into believing that the prosecutor is there to help him out.” As a sanction, Blumenfeld precluded the DA from introducing the pre-arraignment statement at trial.

The DA’s office argued that sanction was inappropriate and asked the Appellate Division to vacate it. The court heard arguments in June about whether preclusion was an appropriate remedy.

When he conducted the ethics inquiry, Blumenfeld accepted a letter from Ellen Yaroshefsky, a legal ethics expert at Manhattan’s Benjamin N. Cardozo School of Law of Yeshiva University, who said prosecutors give the mistaken impression that they’re disinterested. She added that the “context of the interview” tricks defendants into thinking “that there is an urgency to speak now when there is no advantage to him doing so prior to appointment of counsel.”

The Queens DA countered with its own expert reports, including a statement by Joseph Bellacosa, a former judge on the New York Court of Appeals, the state’s highest court. He said Blumenfeld shouldn’t have conducted an ethics inquiry into an officewide practice, since no judge has yet ruled that statements elicited as a result of the program interrogations are involuntary. “It’s putting the cart before the horse,” he says.

“As a matter of form, it’s putting its lawyers’ licenses on the line by telling them to go forward” with office practice, he says. Richman adds that, as a practical matter, it’s not likely that any prosecutors would face disciplinary charges for following office procedure in this regard.

Meanwhile, the DA’s office toned down its preamble after Blumenfeld’s opinion. The new version no longer informs defendants that this is their only chance to speak to a prosecutor before going into court. Nor does it tell defendants that they “must” then give the prosecution their side of the story.

Richman says courts will “tolerate a reasonable amount of subterfuge.” But, he adds, “there are limits.”