Should the Supreme Court select some cases by chance? 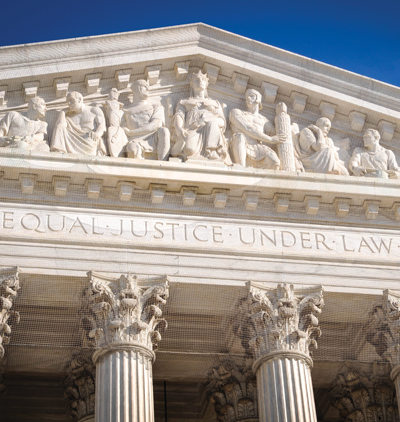 As the Supreme Court term winds down, the justices are busy churning out the last of their opinions. But even after the term ends—usually by late June—and most of the justices depart Washington, D.C., their law clerks will stay behind to continue reviewing the never-ending torrent of appeals to decide which to recommend for addition to the merits docket for next term.

If the clerks are like those who preceded them, they will tend to be risk-averse when it comes to recommending grants. The only cert petitions they are likely to recommend will be those presenting clear splits in authority among federal appeals courts or those in which a federal or state statute has been struck down.

For a variety of reasons, the number of cases the court has decided on the merits after full argument has declined significantly in recent years, from a high of some 150 per term a generation ago to an average in the mid-70s more recently. (This term, the court is on pace to issue just 64 merits decisions.)

Many observers believe the court can—and should—decide more cases. Now come two legal scholars with a radical proposal for adding to the court’s docket. Not by finding more cases that are clearly worthy of cert, by whatever standard, they say, but by just adding more cases—at random.

In a paper titled “The Lottery Docket,” Daniel Epps and William Ortman propose that the court grant review of a significant number of additional cases each term purely by chance from final judgments of the federal circuit courts.

“We question the premise that only ‘important’ cases deserve the court’s attention,” the authors write in the paper to be published in the Michigan Law Review.

“The legal system would be improved if every term, the Supreme Court were forced to decide some unquestionably unimportant cases—some run-of-the-mill appeals dealing with the kinds of ordinary and seemingly inconsequential legal questions that the lower courts resolve every day,” they write. “Over the long run, a lottery docket would offset the pathologies of the certiorari system without depriving the court of its ability to resolve questions that have divided the lower courts.”

Epps, an associate law professor at Washington University in St. Louis, and Ortman, an assistant law professor at Wayne State University in Detroit, say those “pathologies”—besides hearing too few cases and an unrepresentative sample at that—include ignoring particular areas of the law and having a docket that’s been captured by the elite practitioners of the Supreme Court bar.

“There are a lot of cases that just miss the court’s attention, and that’s a problem,” Epps says.

Epps and Ortman say some aspects of their idea are open for discussion, such as whether it would take action by Congress or simply the court itself to implement, and whether to include state court decisions.

But the idea itself is simple enough. The court would accept a number of cases each term, selected randomly from all final judgments. This would introduce more randomness than allowing losing parties to decide whether to enter the lottery, though if a case were chosen, that losing party would still decide whether to proceed.

“Normal rules of forfeiture and waiver would apply, but otherwise the appellant could make any argument properly preserved in the court below,” the paper says. “The Supreme Court, in turn, would have an obligation to rule on the merits of the dispute—just as a circuit court panel would.”

The authors recommend a range of 20 to 40 cases. “Our view is that the court should hear enough new cases so as to meaningfully increase the likelihood that the court will be exposed to a wide range of issues, at least over a multiyear period—but not so many new cases that the court feels overwhelmed by the influx,” the paper says.

The scholars argue that there would be multiple benefits: The court would be exposed to a much wider spectrum of federal litigation.

There would be more accountability for lower federal courts, since many circuit judges currently know a case of theirs lacking in cert-worthy qualities is unlikely to be accepted for review by the Supreme Court. A lottery docket would make every final judgment a potential candidate for high court review.

And even though the lottery would bring many relatively unimportant disputes before the justices, there is the possibility that it would add a case of importance that likely wouldn’t get granted under the Supreme Court’s current procedures.

One flaw with the circuit-split standard, the authors say, is that federal appeals courts often “coalesce” around a particular position, and sometimes no split emerges.

“You end up with these cascades, but it doesn’t mean that every court of appeals has kicked the tires independently on an issue,” Epps says.

Putting aside, for a moment, whether the idea is feasible, the proposal has drawn objections, some of which the authors take on pre-emptively. For example, they note that Judge J. Harvie Wilkinson III of the 4th U.S. Circuit Court of Appeals at Richmond, Virginia, has written that critics of the Supreme Court’s case selection process are offering solutions in search of a problem. Wilkinson, reviewing “The Lottery Docket” at the ABA Journal’s request, says he did not find it persuasive for a number of reasons.

“To begin, ‘randomness’ is the very opposite of rationality, and a ‘lottery’ is the very antithesis of what justice is meant to represent,” Wilkinson says. “Why should some litigants be favored over others with what essentially amounts to a roll of the dice?”

Further, the judge says, an underlying premise of the proposal is that the Supreme Court should devote itself to what the authors term “unimportant” cases at the expense of that cohort of cases that will affect many thousands—and indeed millions—of Americans.

“That is an odd allocation of a finite resource, to say the very least,” Wilkinson notes.

“Moreover, ordinary cases are not suffering from neglect,” the judge continues. “They have been subject to multiple rounds of litigation in the lower state and federal courts. There is no reason to review further cases whose resolution the broadest swath of judges would regard as correct.”

Epps and Ortman say that the Supreme Court’s approach to certiorari reflects a number of trade-offs. “In its heavy reliance on imperfect proxies, the court appears to have concluded that the limited time and attentions of the justices are best spent on the merits cases, not on gatekeeping,” they write.

As it happens, Epps was a law clerk for Judge Wilkinson before going on to serve as a clerk for Justice Anthony M. Kennedy during the 2009-10 term. That means he was a participant in the cert pool and had a firsthand role in that gatekeeping function.

In that respect, he shares an experience with the court’s newest member. Justice Neil M. Gorsuch was a clerk to both Justice Byron R. White and to Kennedy during the 1993-94 term.

Gorsuch thus participated in the cert pool, in which the clerks divvy up all the cert petitions and write a single “pool memo” for each that is shared among all the participating chambers.

A review of Gorsuch’s pool memos by this reporter for SCOTUSblog while his nomination was pending found that among some 50 he wrote during that term, Gorsuch recommended few if any grants. Besides the fact that Gorsuch managed to avoid drawing memo duty for pending appeals involving some high-profile issues, such as abortion, most of the petitions he reviewed simply did not present cert-worthy issues.

That review of pool memos, which required paging through several thousand from that term just to find ones written by Gorsuch, also left the indelible impression that a random selection of some appeals for merits review would leave the court with some strange and meritless cases.

But such critiques and skeptical observations have not deterred Epps and Ortman from advancing their idea.

“We’re academics,” Epps says. “Part of the freedom we have is to make speculative proposals designed to get you thinking, even if no one is going to be implementing them tomorrow.”

This article originally appeared in the June 2017 issue of the

ABA Journal with the headline “Random Review: Should the high court consider extra cases through a chance-centered selection process?