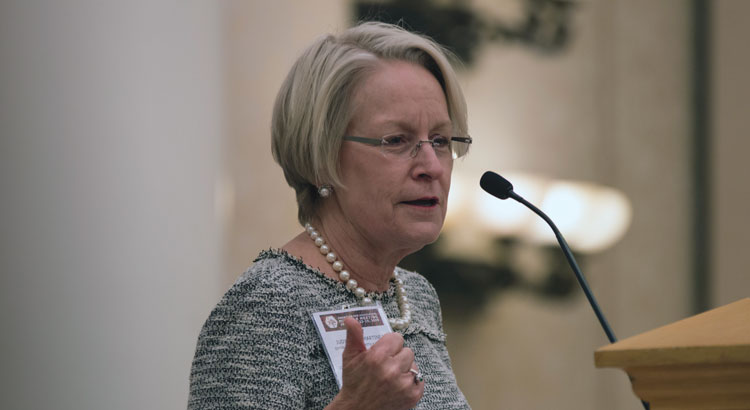 The ABA House of Delegates had much on its agenda at the 2019 ABA Midyear Meeting in Las Vegas.

The policymaking body of the association passed a slate of criminal justice resolutions, including ones on clarifying expungement procedures, tightening child abuse laws and ensuring female prisoners have access to toilet paper and feminine hygiene products. Two late-breaking resolutions and their reports condemned the federal government shutdown that ended in January and opposed disaster-relief funds allocated by Congress being redirected to fund other items like a border wall. Delegates also voted to condemn the federal government’s “zero tolerance” policy for people caught crossing the border illegally and to urge that the federal judiciary take measures to ensure that illegal-entry defendants are represented by counsel.

Some delegates were moved to stand and speak in favor of resolutions, as ABA President-elect Judy Perry Martinez did for Resolution 113, which opposed laws that discriminate against LGBT people exercising their right to parent. Martinez told the House about the experience of her niece and her niece’s wife. In the process of becoming foster parents, the couple had a home visit from a woman who was plain about her personal beliefs.

“She advised them that she was Baptist but regardless of what she believed, she was going to fulfill her duties and do what the law required,” Martinez said. “She followed the law with respect, fairness and equality.”

Martinez’s niece and her wife have now fostered 20 children and are on track to adopt their third child this spring. Martinez urged the House to help create more such stories by voting for the resolution. Overwhelmingly, it did.

Patricia Lee Refo addresses the ABA House of Delegates after the Nominating Committee selected her as president-elect nominee. Refo is a partner at Snell & Wilmer in Phoenix and has served as chair of the House and the Section of Litigation. Her nomination virtually assures that she will be formally selected by the House as president-elect in August and begin serving her one-year term as president after the close of the 2020 ABA Annual Meeting. “The strength of this extraordinary association is the breadth of the work that we do, and my goal is to continue the work of those who have come before me,” Refo told the ABA Journal.