She-Hulk comic turns its focus to solo practice at the urging of its writer, a practicing attorney 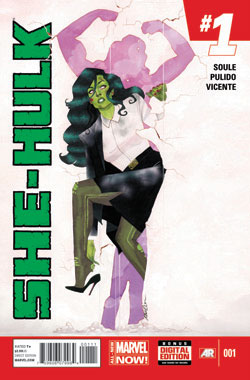 While most litigators have tangled with problematic opposing counsel, few have clashed with supervillains. For Jennifer Walters, both are all in a day’s work.

Walters, perhaps better known as her alter ego She-Hulk, the Marvel Comics superhero, recently took on what may be her toughest challenge yet: solo practice. Since her creation in 1980, She-Hulk has had many adventures as a superhero. But this year, She-Hulk writer Charles Soule decided to show another side of her life as a lawyer, and the storyline has been just as entertaining.

The story began after She-Hulk, who’s been featured in The Avengers and Fantastic Four, was passed over for a bonus at her New York City law firm for not bringing in business through her superhero network, despite billing 2,800 hours. Like other frustrated associates, she had enough and opted to go solo. Now she rents space in a building that caters to the superpowered. Her paralegal brings a monkey to work, and her very athletic private investigator is called Hellcat. Her new practice has a small but growing client base, which includes villains’ spouses and children.

“It was Marvel’s idea to have a lawyer write She-Hulk,” says Soule, an attorney in Brooklyn. “But focusing so specifically on a young attorney opening her own practice was my idea.”

Soule peppers the story with details true to the profession, including substantive and procedural aspects of immigration law. Sort of. 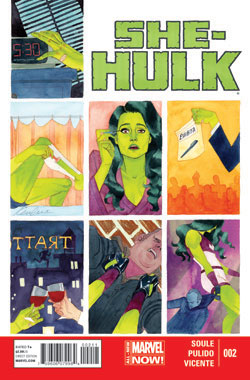 In one issue, She-Hulk wins asylum for a client—that is, until a megalomaniac dictator blows a hole in the courtroom roof and absconds with her client. In another, while explaining case strategy to a client, She-Hulk says that 90 percent of lawyering involves conversations. After smashing Iron Man’s automated guards so that she can have such a conversation, she says the other 10 percent is fighting robots.

“While I don’t have any specific agenda as far as using the book to comment on being a lawyer, I do take opportunities as they arise within stories to convey various things that I find true about the profession,” Soule says. “Nurturing relationships, networking, dedication, focus … being an attorney isn’t something that can be taken casually, especially if you’re trying to make a go of your own practice.”

As a practicing attorney, Soule also enjoys the cathartic outlet that She-Hulk offers. He includes true-to-life illustrations of the industry’s frustrations, like when She-Hulk tells her client to hurry because no judge will stay past 5 or when a firm’s name partner details the expense of conference room decor before withholding an associate’s bonus.

“I would be lying if I said it wasn’t enjoyable to use She-Hulk to poke fun at the legal field from time to time. … But I also have an immense respect for the profession,” Soule says. “Writing a strong, interesting lawyer character who also happens to be a superhero is a unique opportunity.”

This article originally appeared in the July 2014 issue of the ABA Journal with this headline: “Saving the World—One Lawsuit at a Time: She-Hulk comic turns its focus to solo practice.”