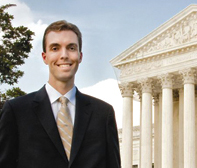 In April, Justice Antonin Scalia did what he does best. To put it bluntly, he put it bluntly: If you want to be a clerk and you’re not from Har­vard or Yale, he’s just not interested in hiring you.

No shocker, that. But the way Scalia said it was classic Scalia. During a question-and-answer session at American University Washington College of Law, Scalia told a student she had little chance of getting a Supreme Court clerkship with a JD from a school like American.

Needless to say, the folks at American University were none too pleased with Scalia’s statements. Claudio Grossman, dean of the Washington College of Law, said in a statement: “We welcomed Justice Scalia to our law school, but disagree with his approach to hiring law clerks. He himself admitted that one of his best clerks went to a school from which he would not have recruited.”

But Scalia’s comments, however im­politely expressed, re­flect a common observation of Su­preme Court justices: They tend to hire clerks from a pool of elite law schools. Typically, the favorite law schools are Har­vard, Yale, the Uni­ver­sity of Chicago, the University of Michi­gan, the Univer­sity of Virginia, Stanford and Columbia.

All of these schools are considered top-tier law schools and are ranked in the top 10 by U.S. News & World Report. Meanwhile, American is ranked 45th. Scalia’s simple refusal even to consider a school like American highlights a question asked every term and still not clearly answered: Are the Supreme Court doors open to all quality students, or is it mostly a province for the same old crowd?

“It all smacks of academic elitism,” says Todd Peppers, a political science professor at Roanoke Col­lege in Salem, Va., who has written a book on the role of law clerks at the Supreme Court, Courtiers of the Marble Palace.

“You see the same patterns, the same schools, over and over, year after year,” he says.

Since the 1920s, the high court justices have shown a clear preference for elite schools, and the pattern continues, scholars say. In recent years, graduates of Harvard and Yale often made up half of the hires per term. In addition, most Supreme Court clerks have prior clerking experience, and the justices tend to pick from those who clerked for a selective group of judges, such as David Tatel and Alex Kozinski.

The court does not keep records of the racial and gender demographics of its law clerks. However, court watchers say that out of 36 clerks last term, there were 13 women and four minorities. Since 1998, the number of minority clerks has varied from none to nine. These numbers, however, are well above what they were decades ago.

In April, during a congressional budget hearing, Justice Clarence Thomas said that finding qualified Asian-American candidates is “not a problem,” but that it has been more difficult to tap qualified blacks and Hispanics. Thomas also said that he casts a broad net when looking for candidates, according to the Legal Times.

While the number of female and nonwhite clerks has gradually increased over decades, there is room for improvement, according to Artemus Ward, a political science professor from Northern Illinois University.

Ward describes the Supreme Court as an “institution that is in transition.”

“Clerkships were the province of white males from the elite law schools for decades,” says Ward, who has written Sorcerers’ Apprentices, a book on clerks at the high court. “Top schools are still somewhat of a farm system for law clerks. It’s a very slow and grad­- ual change.”

But there is little evidence of change when Scalia is talking. In his discussion with law students, Scalia went on to say that he has had only one law clerk who wasn’t from one of the top schools. That clerk, Jeffrey S. Sutton, is now with the Cincinnati-based 6th U.S. Cir­cuit Court of Appeals. Sutton graduated from Ohio State Univer­sity, and Scalia explained that he was inherited from Justice Lewis F. Powell Jr. after his retirement.

“I wouldn’t have hired Jeff Sutton,” Scalia said. “For God’s sake, he went to Ohio State! And he’s one of the very best law clerks I ever had.”

“I’ve urged Justice Scalia to recognize, as so many others have, the lessons of his own experience: Ohio State produces extremely talented lawyers,” says Alan C. Michaels, dean of the university’s Michael E. Moritz College of Law.

LOOKING BEYOND THE FAMILIAR

Despite scalia’s clear preference, there are examples of justices reaching out to accept a graduate from a less prestigious school. Looking to the past, Justice Byron White made it a point to hire interesting people—a man who had worked in a coal mine, for example, and a former high school administrator.

According to Dennis Hutchinson’s biography of the famous jurist, White said: “Look, there are a hundred people a year that could do the job adequately. I might as well have someone who’s interesting, and that doesn’t mean the ones that the fancy law profes­sors recommend.”

And there are examples from more recent years, such as David Stras, now a constitutional law professor at the University of Minnesota Law School. Stras clerked for Justice Thomas during the 2002-2003 term. A graduate of the University of Kansas School of Law, Stras says he never felt “out of his league” while he was clerking.

“People find out I clerked for Justice Thomas, and they assume I went to Harvard or Yale,” says Stras. “I still get that, frankly. People act surprised that I did not come from an elite law school.”

For the 2009-2010 year, the justices have picked overwhelmingly from the elite end of the law school pool—Harvard and Yale are the clear winners, yet again. But Justice Samuel A. Alito Jr. caused a stir by choosing Seton Hall alum Lucas Townsend for a clerkship.

“Obviously we’re thrilled,” says Patrick E. Hobbs, dean of Seton Hall University School of Law in New­ark, N.J. “It’s a great accomplishment for a law school to be able to boast a Supreme Court clerk. It suggests something about the quality of the school.”

Hobbs says that Seton Hall focuses a great deal on clerkships—and that more than 30 percent of the alumni go on to clerkships. He also says that Alito has had a “long relationship” with the school and has taught several classes as an adjunct professor.

“He got to see firsthand the quality of our students,” says Hobbs. “Absolutely.”

Additionally, among the hires for 2009 and 2010 are alums of the University of Georgia, George Washing­ton Uni­versity and the University of Texas. And some jus­tices, including Alito and Ruth Bader Ginsburg, have been hiring some slightly older law clerks who have varied work experience. Ginsburg recently chose Amy Bergquist, a graduate of the University of Minnesota Law School. Bergquist worked as a high school teacher for 11 years before deciding to become a lawyer.

But some academics say that scattered examples of out-of-the-mold hiring do not diversity make.

“The oddball school gets chosen, but mostly it’s this: Some favor Yale over Harvard, and some favor Stanford over the University of Chicago. That’s not diversity,” says Peppers.

“Seton Hall’s having kittens over the hiring of Lucas Townsend, and it’s because it’s so rare. This is the gold ticket, this is the brass ring, and it’s going to the exact same group of people again and again. Why not try to open this opportunity to more people?”

As Michaels of Ohio State puts it: “While the students at Harvard and Yale law schools certainly are smart and talented, Ohio State and other public law schools also attract and produce some of the nation’s best and brightest.”