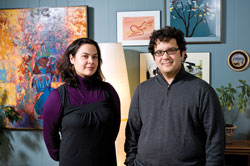 Photo of Mindy and Thomas Terrence by Adam Reitano.

When the fictional television brothers Frasier and Niles Crane attempted to open a joint psychiatric practice, sibling rivalry intervened and the effort was soon deemed hopeless.

In real life, Seattle-based attorneys Mindy Ann Terence and Thomas Terence seem to have the formula for a successful sibling practice figured out.

The pair, who set up shop together in March 2008, contend their connection as sister and brother makes for honest communication and the effective delegation of work.

While no one tracks the number of siblings who practice law together, the Terences consider their partnership unique.

The brother and sister, who handle wills, estates and other general practice matters, have a long history of working together, beginning as kids in Houston, where they helped their father run a home-based newspaper publishing legal notices. Thomas aided with distribution, while Mindy set type.

“Our long-range plan was to eventually practice together,” says Thomas, 38, adding: “We liked how our parents lived their lives. … We kind of wanted the same life for our kids as well.”

Following in their dad’s footsteps, the two attended South Texas College of Law, with Mindy finishing first and working for a short time as a criminal defense attorney.

When Thomas graduated, it seemed natural that he would move to Seattle, where his sister had relocated for her husband’s IT career. Within months, they were working together.

“It was all very calculated,” Mindy recalls.

To be sure, the legal team also had an ulterior motive. Their older brother, Benjamin, who Mindy calls the “glue of our family,” is developmentally disabled; they ultimately plan to share in his care.

“That’s probably something that was always in the back of our minds,” Thomas says, adding, “it’s good for us to have flexibility.”

At work, the two play to each other’s strengths, with Mindy gravitating toward meaty research and Thomas taking on much of the detail work, such as scheduling and billing.

They say family ties eliminate any fear of criticizing each other’s shortcomings.

“He doesn’t take it personally and he never has, and that’s just because he knows me very, very well,” Mindy says.

Clients, who sometimes initially assume that Terence & Terence is a husband-and-wife team, tend to look favorably on their unusual working relationship.

Of course, the arrangement is not always idyllic.

“I have a long memory of when I feel Mindy has slighted me in the past,” he jokes.

Is your solo practice unique? Tell us about it at [email protected].