Source of Solace: Off the bench, federal judge dedicates time to helping others 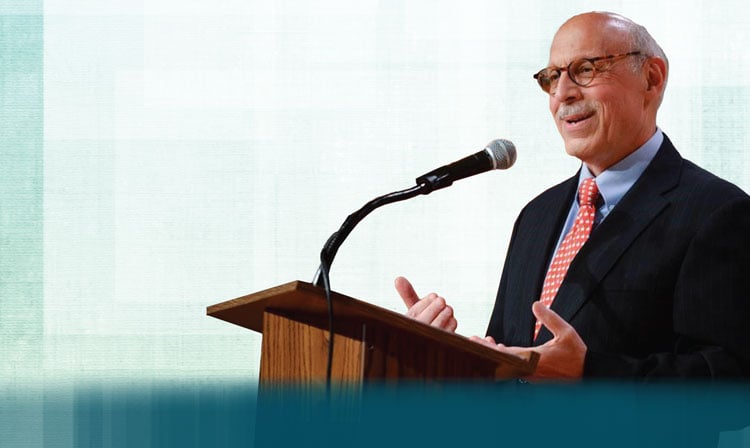 When a Louisiana prosecutor’s family visited South Africa for the 2010 World Cup, tragedy struck. A drunken driver hit and killed one of the lawyer’s sisters and left her brother with a critical head injury.

U.S. District Judge Jay C. Zainey in Louisiana’s Eastern District heard the devastating news and was told the family needed help paying for a medical jet to bring the family home, with the cost expected to exceed $300,000.

Zainey did what he is well-known for: He jumped into action. As a judge, Zainey is not allowed to raise money, but he did the next best thing. Zainey emailed members of the SOLACE program in his state to see whether any of them had contacts in the medical evacuation industry who could help the prosecutor’s family.

SOLACE, which Zainey co-founded more than 15 years ago, stands for Support of Lawyers/Legal Personnel—All Concern Encouraged, and it features a broad network of legal professionals who try to help fellow members of the legal community and their families in times of significant need.

Less than 20 minutes after Zainey sent the email about the tragic events in South Africa, a local law professor wrote back indicating her brother was an intensive care doctor in New Orleans who regularly uses medical transport and would do his best to help. By the next day, Ochsner Medical Center in Jefferson, Louisiana, agreed to send a critical care team to South Africa to pick up the injured man. In addition to donating the doctors, the hospital said it would help fund the flight.

Zainey says the story is just one of many showcasing the profound generosity of legal professionals involved in the SOLACE program, as well as that of their contacts in other industries. SOLACE members also have donated an SUV after flooding in Louisiana; provided an apartment in the Boston area for a family to stay while children received treatment; and cared for the dog of a person who was receiving cancer treatment.

“I am always overwhelmed and inspired by the great concern and compassion that members of our legal community have for each other,” says Zainey, who is based in New Orleans. “It makes me proud to be a member of our honorable profession.”

Zainey, a 1975 graduate of the Louisiana State University Paul M. Hebert Law Center, says he sees working in the law as a great way to give back to others. He started his legal career teamed up with a respected criminal defense attorney before going into solo practice in 1984. In that role, Zainey handled a variety of cases, including personal injury, family law and criminal defense matters.

In the mid-1990s, Zainey became the first solo practitioner elected president of the Louisiana State Bar Association. During his presidency in 1995-1996, he started developing a reputation as a leader in the legal community who created ways for lawyers to help others needing assistance.

He also established the Committee to Provide Legal Services for the Disabled, which was designed to provide training and offer opportunities for lawyers to work in that domain.

Zainey says his family has extra compassion for those with disabilities because his son, Andrew, has special needs.

“Andrew is our inspiration to be better people and do more for people,” says Zainey, who has three children with his wife, Joy.

He also credits his parents and his Jesuit education for instilling in him a drive to serve others. That desire played a key role in him wanting to transition to the bench.

“As a lawyer, I certainly hoped to have a positive impact on people’s lives,” Zainey says. “I thought as a judge I would have a greater opportunity to have an impact on more people’s lives.”

Zainey was nominated to a federal judgeship by President George W. Bush and took the bench in February 2002.

A tragedy in Louisiana several months later sparked the creation of SOLACE. New Orleans attorney Monica Surprenant, the wife of Zainey’s friend Mark Surprenant, suffered a ruptured brain aneurysm and was in the hospital for weeks.

Mark Surprenant, a partner at Adams and Reese in New Orleans, says many members of the local legal community stepped up to help, such as bringing flowers to the hospital and delivering meals to the family’s home.

As Surprenant was walking back to his office from church one day around this time, he started thinking there could be a better-organized way to coordinate the assistance his family received.

Surprenant says it was divine intervention that caused him to bump into Zainey during his walk and share his thoughts on how others who faced their own tragedies could best be supported.

Zainey was immediately enthusiastic about the idea of better coordinating aid and started working his contacts to turn the idea into reality.

“Of all the people to run into, Jay was the best person I could have ever come in contact with at that point in time,” Surprenant says. “He really took the ball and ran with it.”

Surprenant now is president of SOLACE Inc., a 501(c)(3). Zainey gives him plenty of credit for the program. “It was really his idea to help people in a time of need when he was experiencing his own ordeal,” he says.