Some firms are trimming their footprints creatively and efficiently 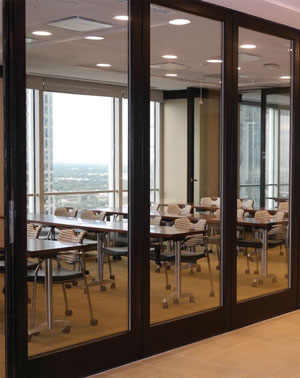 Ready for a stand-up desk? How about a conference room on wheels? These and many other innovations are either on tap or already here as law firms, spurred by a desire to downsize their real estate footprints, slowly shed tradition and step tentatively into the 21st century.

Taken together, the new wave of cubicles, wireless headsets, coffee lounges and open spaces add up to a fundamental design shift. In the old paradigm, a lawyer retreats to a solitary office to get things done. Now you’ll have a discussion in a collaboration room.

In November, the Tampa office of Buchanan Ingersoll & Rooney, with about 50 attorneys, consolidated two offices totaling around 60,000 square feet into one almost half its size at 32,000 square feet over two floors.

Rhea Law, chair of Buchanan Ingersoll’s Florida offices, says the firm is leveraging desktop video and interactive document-sharing, as well as “follow-me” capabilities that allow attorneys to receive real-time email notifications from their computer, mobile device or throughout any of the firm’s 20 offices via their smartphones.

The office design called for an increased use of glass to let in light while preserving the need for privacy.

“We have lots of collaborative space, and we are truly enjoying that,” Law says. “We also put in a coffee bar so there’s a lot more informal dialogue between clients and attorneys, and it’s proving to be very helpful and aids the creative capabilities of our lawyers in problem-solving.”

In addition to reconfiguring the space, Law says, the firm sought to build in a wellness component: Behold the stand-up desk.

“Sitting at a desk all day long is considered the next smoking,” Law says of its impact on health. “So we’ve said anyone can have a stand-up desk.”

There is also a belt-tightening element to the changes. “We are noticing a tightening up of the market in the Tampa area—higher prices and less availability,” Law says. “There have been several announcements of new office space, but we have not seen a significant expansion in 15 years.”

Law says the Tampa office is being regarded as a prototype for other Buchanan Ingersoll offices as their leases expire.

Real estate professionals who work with law firms say innovation is on the rise, but add that most firms are still in the talking stages.

Among the trends Raimondo has noticed is “reversing the window line” so that administrators might be in windowed offices and lawyers in internal cubicles. “For attorneys who are at their desks infrequently,” he says, “the argument is made that folks who are there every day need the access to natural light.”

Raimondo also points out a generational twist to the new law office. “We hear that millennials are more open to things that are less hierarchical, and that is my experience,” he says. “One workplace strategy is thinking about open space and working outside a traditional office environment, so instead of a library, there’s a library that could be a lounge or a coffee bar or a cafe with soft seating and open collaborative areas.”

Jeffrey Weil, executive vice president at real estate management firm Colliers International’s Walnut Creek, California, office, says law office redesigns are also driven by less need for support staff. “It used to be one or two attorneys per assistant, but now it could be one assistant for seven attorneys as more lawyers do their own paperwork,” Weil says.

Even the idea of what a successful law office should look like is changing. Where heavy doors and wood paneling once were meant to convey the impression of stability and authority, Weil says today’s office should be designed with the client in mind.

“The office should be a fit with your clients,” Weil says. “You want them to feel comfortable there and you don’t want them to think you’re overcharging them because of your office.”

This article originally appeared in the April 2016 issue of the ABA Journal with this headline: “Space Time: Some firms are trimming their footprints creatively and efficiently.”