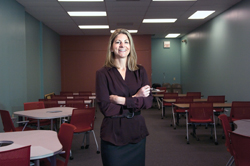 It’s only natural that Caroline Worley would build a law practice focused largely on the needs of budding entrepreneurs. She grew up mired in the day-to-day workings of Zettler Hardware Co., a family business founded in the 19th century in Columbus, Ohio.

“It’s what I do,” says Worley, whose immediate family still runs several of the stores. “I relate well to entrepreneurs.”

Worley takes the same approach to her Columbus law firm, treating it as a budding entrepreneurial venture. Instead of investing in traditional marketing, Worley devotes about 20 hours a week to a string of efforts targeted at helping emerging companies—and potential clients—gain their foothold in the market. She volunteers at places that help entrepreneurs, including business incubators, business development groups and university entrepreneurship programs; she also serves on a variety of boards, including the local chapter of the National Association of Women Business Owners.

Worley regularly participates in roundtable forums addressing issues of interest to startups, and she hosts short, open-door sessions at business development sites such as the Dublin Entrepreneurial Center, a suburban Columbus organization providing resources to more than 60 startups.

New business owners tap her expertise about incorporation, financing, rent and lease agreements, and related topics—all for no charge. When questions fall outside the legal scope, she provides referrals to accountants, bankers and other professionals. Is she wise to spend so much time out of the office off the meter?

“The vast majority of the people who practice law won’t get out of their chair,” says lawyer Gerry Riskin, founder of law firm management consulting firm Edge International in Savannah, Ga. “If anybody says she’s not wisely marketing herself, they should throw stones at their own glass house.”

Specialization, he adds, is becoming increasingly important in a legal environment characterized by the commodification of services. “People really want a specialized understanding of the nature of their problems.”

Worley’s paying customers, which include tech companies, retailers, hydroponic gardeners and artisanal bakers, have grown to more than 300 from 50 in 2009, when she started her practice. She expects revenue to be up nearly 20 percent this year, matching last year’s growth.

“People are getting downsized,” she says. “They’re turning hobbies into businesses, and my business has grown as a result of it.”

Worley says there’s no secret formula for growth. It’s just a matter of constantly finding opportunities for exposure to emerging companies, and paying close attention to their needs. She tries whenever possible to give accurate, upfront estimates for services—a strategy that leads to few surprises for cash-strapped clientele.

“We try to make it so it’s approachable,” she says.

What’s the secret to your success? Share your insights with us at [email protected].