Stealing stories from the movies 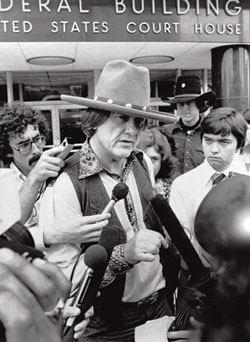 As Bob Dylan famously observed in song, “I had to rearrange their faces and give them all another name.” His line isn’t a cautionary warning about altering characters’ identities in art to avoid a libel suit. It suggests a metaphoric commentary on the artistic process itself, about how songwriters steal from the past, the lyrics and melodies taken from songs that have come before them. Indeed, like many folk artists, Dylan is a masterful and merciless song thief, stealing and transforming melodies, lyrics and stories whole cloth without attribution or citation. To varying degrees, all popular storytellers—including, yes, lawyers, and especially trial lawyers—are invariably thieves of this sort, drawing upon and incorporating whatever works into their own storytelling practices.

Whether intentionally or unintentionally, trial lawyers often lift stories and narrative “framing” from popular movies. Why movies? Typically, trial stories are linear, protagonist-centered, theme-based, plot-driven stories akin to Hollywood entertainment films. Like movies, trial stories are compressed and time-limited: Plotting is elevated over complex characterization. And lawyer stories, as with movies, recycle recurring genre-based story ideas and narrative forms prevalent in popular culture. Cinematic story structure also frames how jurors process and interpret evidence. Like movie audiences, jurors passively watch the unfolding drama of a trial as if sitting in darkness watching a movie. So it is not surprising that so many effective trial stories are shaped and prefigured by the movies.

HOW MOVIES INFLUENCE A COMPLEX CLOSING

Take, for example, Gerry Spence’s closing argument in The Estate of Karen Silkwood v. Kerr-McGee. Silkwood, a lab analyst at Kerr-McGee’s Cimarron nuclear facility in Oklahoma whose job was to grind and polish plutonium pins used to manufacture fuel rods for nuclear power plants, was contaminated with radioactive materials. A union representative, she had previously complained about conditions at the plant and was allegedly accumulating documentation of Kerr-McGee’s safety infractions and violations of regulations. She was killed in a mysterious one-car accident the day before a scheduled meeting with a New York Times reporter about safety conditions at the plant. Her apartment was quarantined and all her personal property inside was buried in a nuclear waste site. Spence (pictured above) sued Kerr-McGee for Silkwood’s pain and suffering as a result of the exposure, and for property loss and punitive damages. At trial, the jury initially awarded $10 million in punitive damages to Silkwood’s family.

Spence’s closing argument carefully fits the relevant evidence into a well-structured narrative framework. First, Spence’s version of Silkwood’s story is akin to a classic Hollywood melodrama about a heroic and virtuous protagonist battling a powerful and evil villain. In torts stories, just like Hollywood entertainment films, plaintiffs lawyers want juries to root for sympathetic and heroic protagonists to prevail against the dangerous forces aligned against them. The genre of melodrama is about the battle of good against evil; the ending is predetermined and the outcome is never in doubt. Heroism wins out over villainy, even as the forces of antagonism seem to build in strength and intensity, testing the will of the virtuous protagonist. As literary theorist Northrop Frye put it, the core theme in melodrama is “the triumph of moral virtue over villainy and the consequent idealizing of the moral views assumed to be held by the audience.” This is especially important in trial stories where, unlike a movie audience, the jury is being called upon to act and to write the final ending, thereby providing narrative closure to the story.

Spence’s Silkwood story is a particular type of melodrama; it is a version of the classic Hollywood Western. Silkwood, like Shane or Marshal Will Kane in High Noon or the hero in the prototypical classic Western, is depicted as the loner-outsider who comes to a dangerous territory on the edge of civilization. Dark and sinister forces (often an outlaw gang) have taken over the town or are about to do so, and it is up to the protagonist-hero to act to save the community even if she must sacrifice herself.

Spence’s theory of the case is simply that Kerr-McGee should be held strictly liable for Silkwood’s contamination by the ultrahazardous plutonium produced at the plant. But the story told in the closing argument is not primarily about how she was contaminated, or even about providing compensation to Silkwood’s estate for her pain and suffering and property loss. Instead, like a Western melodrama, the story Spence tells is about the heroine who saves the community and the lesson she imparts about courage and self-sacrifice as the costs of the community’s survival in this dangerous and lawless territory.

VILLAINS AND VILLAINY ON SCREEN AND IN COURT

Alfred Hitchcock observed: “The more successful the villain, the more powerful the story.” The depiction of evil villains and the forces of antagonism that oppose the will of the hero is especially important in melodrama. It is only against the strength of these oppositional forces that the courage and will of the hero are measured. Here, Spence has a problem of narrative construction. He must give life to the villainous corporate defendant, Kerr-McGee. But the corporation is not only nonhuman—it is not alive. It is, in Spence’s words, like “some weird, invisible, extraterrestrial, lifeless glob.”

While Spence’s words may reference a different movie genre, the answer to Spence’s dilemma is suggested by a Hollywood blockbuster of the 1970s, Steven Spielberg’s Jaws. Kerr-McGee is cast into the role of the villainous beast lurking beneath the surface of bucolic “mud springs.” Like the shark in Jaws whose appetite is whetted by the taste of blood, Kerr-McGee is an equally inhuman and ravenous beast whose appetites are whetted by “profits.” Employing a clever homophone, Spence reveals how the beastlike corporation consumes the lives of the workers at the plant—including the heroic Silkwood, a “prophet” who warns of the dangers of plutonium to the workers at the plant.

In melodrama, the villains must be autonomous actors controlled by free will who can then be held accountable for their evil actions and wrongful choices in jury verdicts. In the plot of Spence’s story, akin to the plot of Jaws, the villainous Kerr-McGee grows ever more powerful and dangerous as the story progresses. In the narrative arc of his closing argument, the beast is naked at last in Spence’s rebuttal, emerging from beneath the mud springs of obfuscation and confusion that the defendant’s outlaw gang has presented at the trial—and it must be stopped by an empowered jury.

In his closing argument, Spence implores the jurors to gather all their strength and do what must be done. Spence delivers his “call to the hero” that seems taken from—or at least suggested by—another classic ’70s blockbuster, Star Wars, which in turn is modeled on Joseph Campbell’s The Hero with a Thousand Faces. Although Silkwood is dead, Spence calls upon the jury to act heroically to give her life transformative meaning, to stop the beast, to save the young workers still at the plant from cancer, and to provide an “up” ending to the story of the trial. Spence argues that the only way the beastlike corporation can be stopped is by the heroic jury speaking the only language the corporation understands, the language of money.

Spence adds a final reference to another cinematic blockbuster of the 1970s, The China Syndrome, a film about a devastating accident at a nuclear power plant in California that was released several weeks before the start of Silkwood’s trial. Spence looks back from an imagined future recalling the “sad time” between “1970 and 1979” when “the government held hands with these giants and played footsie” and “they called it the Cimarron Syndrome,” cleverly transposing the name of the Kerr-McGee plant with the title of the movie.

In reading the transcript of the closing argument, it is apparent that Spence employs popular narrative framing taken from the movies to give shape and meaning to Silkwood’s story.

The influences of popular storytelling practices upon lawyer storytelling are extensive and unmistakable. Lawyers are indeed popular storytellers, and there is a perpetual two-way traffic between stories in the courtroom and stories in popular culture. Consequently, it is not surprising that Spence’s Silkwood story was so readily adapted into Mike Nichols’ much-honored movie. Stealing from the movies is for trial lawyers, as song theft is for Dylan, a creative way of extending an art—the art that justice in the courtroom often requires.

This article originally appeared in the August 2014 issue of the ABA Journal with this headline: “Stealing Stories from the Movies: Think of your trial as a screenplay, with the judge and jury watching the drama unfold .”

Philip N. Meyer, a professor at Vermont Law School, is the author of Storytelling for Lawyers (Oxford University Press, 2014).