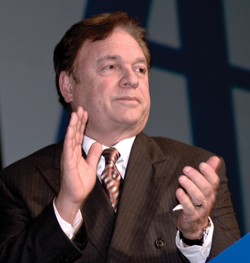 Stephen Zack: "Our profession has to mirror our society" or it will lose credibility.
Photo by Jayms Ramirez

When Stephen N. Zack gazed out over the expanse of the ABA House of Delegates in his first moments as the association’s new president, he couldn’t help thinking about where he was nearly 50 years ago.

“As a 14-year-old in 1961, when I was fleeing Cuba with my family and we were taken off a plane by the G2—the Cuban equivalent of the KGB—and put in a cell, the last thing I could have imagined was a day like today,” Zack said. The son of a Cuban mother and a father whose family roots were in Russia, Zack was installed as ABA president at the close of the association’s annual meeting in San Francisco in August. He is the first Hispanic American to hold that post.

What he learned, Zack said in remarks to the House and in a follow-up interview with the ABA Journal, was that “the loss of liberty is not theoretical. When you have to leave your home, it’s real.” And, he said, just as his family lost its liberty in Cuba under the Castro regime, “we today are under the same attack against our justice system. We are fighting to establish the rule of law around the world, and we are in danger of losing it here in the United States.”

Those concerns are at the heart of a presidential agenda that Zack, who is administrative partner in the Miami office of Boies, Schiller & Flexner, outlined in his speech to the House. For his term as association president, which ends at the close of next year’s ABA Annual Meeting in Toronto, Zack proposed four initiatives:

• A Task Force on the Preservation of the Justice System will be co-chaired by David Boies of Armonk, N.Y., who is the chairman of Boies, Schiller & Flexner, and former U.S. Solicitor General Theodore B. Olson, a partner at Gibson, Dunn & Crutcher in Washington, D.C. Financial pressures are causing severe cutbacks in court operations, said Zack. As a result, “the potential to lose the rule of law in our country is very real,” he warned. The task force will focus on how the recession is affecting access to justice in American courts.

• Zack is creating the American Bar Academy to teach civics to high school students as part of an effort to make civics education a national priority. “Without people understanding their obligations, rights are meaningless,” said Zack. “We have to re-engage our children, but also ourselves, to civics.” The co-chairs for this effort are Paulette Brown, a partner at Edwards Angell Palmer & Dodge in Madison, N.J., and Marna S. Tucker, senior partner at Feldesman Tucker Leifer Fidell in Washington, D.C.

• Zack also is creating a Commission on Hispanic Legal Rights to identify legal barriers to full participation in the U.S. justice system by the nation’s largest and fastest-growing minority group. “We must fully integrate Hispanics into our profession and our society,” Zack said. In particular, he said, “our profession has to mirror our society. If it doesn’t, it will lose credibility with the public.” The commission will be headed by Cesar L. Alvarez of Miami, executive chairman of Greenberg Traurig, and musician Emilio Estefan.

• Finally, the Special Committee on Disaster Response and Preparedness will focus on how courts and the organized bar can prepare in advance to respond to disasters. Zack noted that, after Hurricane Katrina, thousands of lawyers volunteered to go to Louisiana to help out, but the state’s courts turned them away, claiming that they would be engaging in unauthorized practice of law as attorneys unlicensed in the state.

Since then, courts of 18 states have passed a “Katrina rule” that would allow for such pro bono work during times of disaster. Zack also said the legal profession must be prepared to respond to government actions to restrict individual rights in the wake of terrorist attacks and other manmade disasters. “We need to talk about those things, think about those things,” he said. “Otherwise, when it happens, it’ll be too late to respond.”

In addition to these initiatives, Zack will be dealing with other ongoing issues as they reach critical stages, including the ABA’s efforts to rebuild membership numbers, and to address the challenges of globalization and technology (primarily through the work of the Ethics 20/20 Commission created by his predecessor, Carolyn B. Lamm of Washington, D.C.). On both issues, recommendations may reach the House during Zack’s watch.

In the print version and initial online version of "Stephen Zack's Long Journey to the ABA Presidency," September, misidentified the honorary chair of the Commission on Hispanic Legal Rights and Responsibilities. He is musician Emilio Estefan, not actor Emilio Estevez.