Don't underestimate the value of comedy in the courtroom 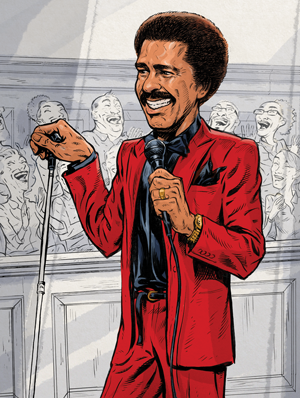 Not long ago in these pages, a column asserted that humor is misplaced in the courtroom and proscribed for attorneys: “Don’t Be Funny: Litigation is no laughing matter to your clients” (November 2015). There is some truth in the observations: Misguided humor can be dangerous in the courtroom, especially inappropriate “jokes.”

Worst of all are jokes that—purposefully or inadvertently—target either the vulnerable or the victimized, or that somehow denigrate the gravity and importance of the proceeding itself (especially to the litigants). The column provides several illustrations of bad courtroom humor—jokes that clearly miss their marks. These misguided attempts at humor are toxic and can have horrible and unintended consequences in litigation, saying far more about the speaker than about the subject of the humor. But the genre of comedy is much broader than bad jokes, and the edge of a sense of humor can be a useful litigation tool.

Purposeful comedy can defuse tension, evoke a shared humanity, engage a jury or judge and, most important, provide an alternative narrative perspective. While courtrooms are not comedy clubs, shrewd and strategic use of humor can be powerful and effective.

Here is a better rule: Any humor that comes at the expense of the weak, the victimized, the vulnerable or the disempowered should be scrupulously avoided. Inappropriate lawyer humor, especially comments that are an abuse of power and privilege, is always a misstep—and misguided jokes can be costly and destructive.

On the other hand, no genre of storytelling is off-limits in the courtroom: melodrama, tragedy and comedy all have their proper places in legal storytelling. And the column’s proscription to never employ comedy is simply wrong. There is much that lawyers can learn about comedy, and how to use it, from artful comedic stories in popular culture.

Of course, some lawyers, by inclination and instinct, are simply better at employing humor than others. And the column makes a correct cautionary observation: Attorneys as humorists must always be careful, for we do not all share the same sense of humor.

Let me briefly identify one type of humor or comedy that is at the opposite end of the spectrum from inappropriate jokes cracked at the expense of litigants, victims or the disempowered. This is socially observant humor that often tips the world upside down and depicts the perspective of the outsider, revealing social truths that may diminish in power or become cliché when expressed more abstractly. That is, this type of comedy invites an audience to reimagine the world from a different perspective.

I think, for example, of Richard Pryor’s masterful standup routines including autobiographical recountings of youthful experiences when arrested by the police and experiences within the criminal justice system. I also recall Pryor’s famous punchline: “I went down to the courthouse looking for justice, and that’s what I found there—just us.” Equally powerful are Pryor’s self-deprecating explorations of his drug experiences, including setting himself on fire while freebasing. He speaks with remarkable candor and insight about the seductions of drugs­—that is, it is the drugs’ voice that speaks seductively to him. We get inside Pryor’s skin, even as he sets himself ablaze. Clearly, these are not intrinsically funny subjects for comedy. Why, then, do we laugh so hard? Perhaps, in part, because we momentarily share Pryor’s ironic edge, his self-effacing honesty, his candor and perspective.

There is a specific word that captures an academic understanding of how this type of humor works. Merriam-Webster’s Collegiate Dictionary defines alterity as “the quality or state of being radically alien to the conscious self or a particular cultural orientation.” As law professor emeritus Jack L. Sammons explains: “The gist of it is that comedy, most of it, enacts a sudden alternative community among listeners, an alterity in academic parlance, and is—very oddly—like religion in this [in evoking shared belief]. This is of value to lawyers because it offers a way of reminding jurors and judges of other ways of thinking ‘we’ all share in situations, like trials, in which our thinking is often divided.” Sammons further suggests: “Next time you listen to a comedian, try noticing the community he or she calls into existence by the comedy. It is always—at least among standups—a claim that ‘we’ see this differently and, of course, ‘we are correct.’” And, of course, Sammons is correct too. Comedy can evoke hidden or embedded subtext. When the audience truly gets it, the recognition may be signaled by laughter.

Of course, trial attorneys are not standup comedians, and it is not our job to manufacture laughter. Besides, few lawyers possess Pryor’s narrative artistry. Nevertheless, trial attorneys sometimes draw purposefully upon this type of dark and ironic outsider humor.

For example, in my criminal law class we talk about the O.J. Simpson case. Many of my students are too young to recall the specifics of the case unless they’ve been watching the recent docudrama featuring it. Most students are initially profoundly skeptical about the defense’s proposed theory: Racism within the Los Angeles police force compromised the murder investigations of Nicole Simpson and Ronald Goldman. For them, there is no possibility that racist Los Angeles police investigators could have conspired to plant evidence framing Simpson, because he was a successful black celebrity. The defendant’s conspiracy theory seems far-fetched, a storyline evoking narrative possibilities beyond their experiences.

I have then played portions of Johnnie Cochran’s masterful closing argument on behalf of Simpson. One of the ways that Cochran draws the jury into the argument is by strategic use of a darkly ironic sense of humor. At a crucial moment in the argument, the students laugh as Cochran dons Simpson’s black knit cap, implicitly mocking the prosecution’s claim that the cap was part of the killer’s disguise. Cochran’s irony, I believe, is a vital component of a complex persuasive narrative strategy; his visual humor re-emphasizes that the prosecution’s earlier “demonstration” had gone awry—when Christopher Darden compelled Simpson to try on black leather gloves also recovered from the crime scene that seemed too small for his hands. Cochran observes: “[Prosecutor Marcia Clark] talks about O.J. Simpson getting dressed up to go commit these murders. I was thinking last night about their theory and how it didn’t make any sense. ... Let me put this knit cap on. You’ve been seeing me for a year. If I put this knit cap on, who am I? I’m still Johnnie Cochran with a knit cap. And if you looked at O.J. over there—and he has a rather large head—O.J. Simpson in a knit cap from two blocks away is still O.J. Simpson. It’s no disguise. It’s no disguise. It makes no sense. It doesn’t fit. If it doesn’t fit, you must acquit.”

FIT TO BE TRIED

In a lesser-known case, United States v. Nelson (1997), federal prosecutor Alan Vinegrad drew upon the context of the O.J. trial and successfully spun irony and dark humor in a different yet equally purposeful direction, mocking Cochran’s argument in that other trial, just as Cochran had done with Clark’s closing argument. Defendant Lemrick Nelson, charged with the stabbing death of Yankel Rosenbaum, claimed that baggy pants smeared with Rosenbaum’s blood introduced at trial did not belong to him, as evidenced by the fact that they did not fit him, though he had appeared in a Newsday photograph wearing the pants. Vinegrad employed an ironic edge and argued:

“What [does the defense] resort to? The baggy-pants defense. Until today the fiascoes of the case on the West Coast—I won’t mention the name—hadn’t invaded this trial. But the defense in his desperation brought it into the courtroom and paraded it before you. It turned the courtroom into a theater of the absurd. Pants don’t fit, you must acquit.”

“All that Lemrick Nelson’s demonstration here proves is: He wears baggy pants. Over the last 5½ years, either these well-traveled pants have gotten stretched out a bit or he’s gotten more slender or firmer or both. Who knows? Maybe that is why the police were able to catch him, because he couldn’t run fast enough, because of holding on to these baggy pants. I guess what I’m really saying, since that California case is in the courtroom now: ‘If the pants don’t fit, I don’t give a ____.’ You fill in the rest.”

Does comedy work in the courtroom? Sometimes, but you have to be careful when and how you use it. And always know what the purpose is and who is the subject and object of the humor.

This article originally appeared in the September 2016 issue of the ABA Journal with this headline: “Comedy in the Courtroom: Clowning around is frowned upon, but don’t underestimate the genre’s value.”