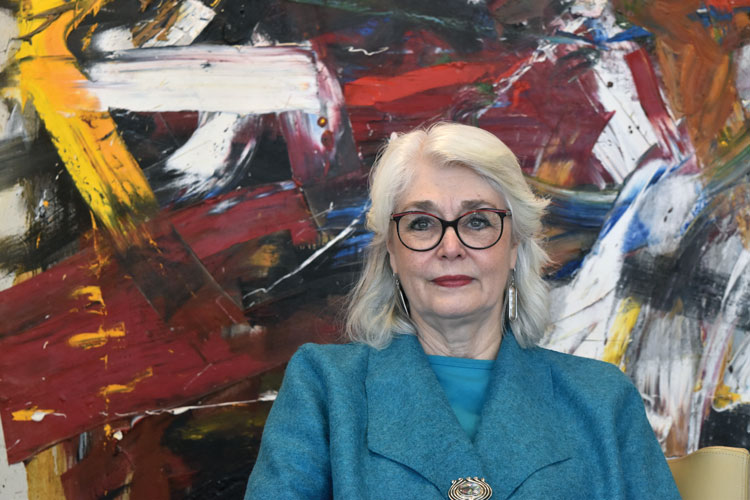 Janet Goelz Hoffman has been an ABA member since 1978. Photo courtesy of Katten Muchin Rosenman.

More than 40 years ago, Janet Goelz Hoffman set out to help those who help others, building a sizable client base of nonprofit organizations before retiring as a partner at Katten Muchin Rosenman on Jan. 31, 2021.

Now in the next chapter of her career, the veteran public finance attorney continues to prioritize the needs of nonprofits at Katten’s Chicago office as a senior counsel and pro bono counsel. She not only assists these clients with transactional pro bono matters, but she also is mentoring younger attorneys who are also interested in making pro bono part of their practice.

As a teenager living in a small suburb of Pittsburgh in the 1960s, Hoffman thought her career choices were limited to teacher, nurse, librarian or secretary.

But after receiving a full-tuition scholarship and enrolling in the National College of Education in Evanston, Illinois, Hoffman realized women had other options. She enjoyed “bookish things” and transferred to nearby Lake Forest College, where she earned a bachelor’s degree in economics and minors in philosophy and literature.

Hoffman, who also was inspired by lawyers in the civil rights movement, decided her next stop was the Northwestern University School of Law. By then, she had two young daughters. After law school, she married Brian Hoffman, a chemistry professor at Northwestern, and, subsequently they had two more daughters.

Because Northwestern allowed her to take its three-year program over four years, Hoffman spent one summer with Chicago Volunteer Legal Services. During her other summers, she helped nonprofit and government clients at public finance boutique firm Borge and Pitt and worked at Kirkland & Ellis. She joined the larger firm’s tax department after she graduated in 1978, and while she liked the work, she missed helping nonprofits.

“I was good at the kind of law that moved money from one person’s pocket to another. But it mattered to me whose pocket the money ended up in, and it mattered to me what they did with the money once they got it,” says Hoffman, who joined the ABA in 1978. “That little boutique law firm did complicated work, but the money ended up in the pockets of governments and not-for-profits, and they did things with that money that just spoke to me more.”

In 1982, she returned to Borge and Pitt, where she handled complex financings and governance and restructuring issues for nonprofits across the country. She became a partner and represented many nonprofit clients long after her firm merged with Katten in 1987.

“Some clients that I started working with back in the ’80s were still clients when it was time to turn them over to younger lawyers,” Hoffman adds.

As Hoffman planned for retirement, she thought about how to ease the transition for her clients and colleagues.

She wanted her clients to receive the same attentive service and knew it would be helpful to connect them with senior associates and young partners who understood their organizations and their business environments.

She tried to pair clients with attorneys who had similar personalities, work styles and appreciation for their missions.

“These not-for-profits are mission-driven organizations, and they make their decisions not only based on the economics of the decision but how it aligns with their mission,” Hoffman says. “And sometimes it isn’t the same decision that a for-profit entity would make.

“So I tried to match people who would be, if not sympathetic to the mission, understanding of it and willing to think about those sorts of issues.”

Hoffman started the multiyear process by working alongside the selected attorneys on her clients’ matters. She then gradually moved out of her position as their primary contact while still being available to attend client meetings and answer questions.

“You’re just the person in the background that they can consult if something comes up,” Hoffman says. “You’re involved maybe at the beginning and the end but not during the middle. And I have to say, I’m very pleased with how it worked out.”

Chad Doobay, a partner in Katten’s Chicago office, started working with Hoffman a year after he joined the firm in 2006.

He immediately recognized her skill in managing complex deals for hospital systems, cultural institutions and continuing care retirement communities and wanted to learn everything he could from her.

“I knew this was the attorney that I wanted to model myself off of in every way,” Doobay says. “She very much mentored me in my public finance practice … and had the intention over probably the past five years to pass her book to me and to some other attorneys.

“She did that very generously and with care, because she cares about these clients.”

After stepping back from her regular caseload, Hoffman had more time for pro bono.

Throughout her career, she drew from her experience with nonprofits and focused on transactional matters for smaller organizations that were often unable to afford legal assistance. In addition to taking on additional cases, she increased her supervision of young attorneys who needed help with their pro bono projects.

Hoffman enjoyed this work, and she talked to Katten in 2019 about stepping into a new role as pro bono counsel after she retired.

“They were very enthusiastic,” Hoffman says. “I think they saw the benefit of that kind of mentorship, and it gives us an opportunity to take on much more complex transactional pro bono on a more consistent basis.”

Jonathan Baum, the director of pro bono services at Katten, who also works in Chicago, is a litigator by background. He often asked Hoffman for help with transactional work when she was a partner. He was thrilled when she joined him in managing pro bono for the firm.

“In addition to her analytical ability and her warmth, she has this wealth of experience,” Baum says. “She’s probably worked with hundreds of nonprofits over the years. One of the things that makes her such an asset, both to the clients and the people she’s mentoring, is there is probably nothing that a nonprofit has experienced that she hasn’t seen before.”

Hoffman helps clients like Oklahoma-based Folds of Honor—which provides scholarships to spouses and children of fallen and disabled service members—update their corporate documentation or procedures and navigate tax issues. She regularly handles real estate or other contracts for arts organizations, including the Northlight Theatre in Illinois.

She also helps startups establish as nonprofit corporations, register with the attorney general as charities in their states, obtain federal tax exemptions and apply for sales tax exemptions. One client is Lakou, an organization that provides construction training to increase development in Haiti.

“They are wonderful projects for young lawyers to work on because they learn about how a business starts up and its structure,” Hoffman says. “That’s one of the places that I particularly like being able to work with people on, because the organizations are doing exciting work, and it’s a great learning opportunity.”

Hoffman, who has four daughters and seven grandchildren, still lives in Evanston and supports local nonprofits in her spare time.

Hoffman chose to engage in this work for several reasons, including to contribute to her community and to develop both as a person and as a lawyer.

“It gave me perspective on the operations and governance issues of a not-for-profit that informed my professional advice to clients,” she says. “Sometimes the most tidy legal solution isn’t the best path for a not-for-profit. Serving on boards has helped me understand the need to marry our legal advice with sensitivity and support for the core mission of each of my not-for-profit clients.”

Print and initial online versions of “Succession Planning,” August-September, should have stated that Janet Goelz Hoffman went to law school before her marriage to Brian Hoffman.