When it comes to following the rule of law, the United States has room for improvement, according to data presented in the first formal version of a study that seeks to measure adherence to fundamental legal principles by nations around the world.

Study findings suggest government, the courts and other legal institutions in the U.S. generally meet a high standard in most of 15 key measures of adherence to the rule of law. But when compared to the collective performance of 10 other highly developed countries, the U.S. scores below the aggregate in 13 areas, and above the aggregate in only two.

The findings indicate that, at least in the view of respondents surveyed during 2009, the U.S. lags behind its peer nations primarily in its adherence to international rule of law principles, according to the Rule of Law Index (PDF) released Nov. 11 by the World Justice Project.

The study puts U.S. compliance with international law at 0.39 on a scale that tops out at 1. The U.S. score is only 59 percent of the 0.66 aggregate score for the high-income countries in which it is grouped.

In most other categories, the U.S. scores within 10 percent of the aggregate score for its group. It grades higher than the group aggregate for having laws that protect the security of property and for an accessible legal process.

But the Rule of Law Index report cautions against taking an overly judgmental approach to the findings. “No society, however advanced in other respects, has ever attained—let alone sustained—a perfect realization of the rule of law,” it states. “Every nation faces the perpetual challenge of building and renewing the structures, institutions and norms that can support and sustain a rule of law culture.”

ONE OF A KIND

The Rule of Law Index was released in a preliminary, 2.0 version in conjunction with the opening of the World Justice Forum II, which the project sponsored Nov. 11-14 in Vienna. The ABA and other sponsors launched the project in 2007 with the goal of nurturing greater adherence to the rule of law worldwide as a path to creating communities of opportunity and equity.

The development of a formula for measuring the extent to which various countries adhere to rule of law principles has been a keystone to the World Justice Project from its inception, so release of the Rule of Law Index, even in a limited version, is viewed by project officials as validation of its design and practicality.

“This is the first index we’re aware of that measures adherence to the rule of law in a detailed and comprehensive way,” says Mark D. Agrast of Washington, D.C., who chairs the Rule of Law Index team. The findings are based primarily on general population surveys conducted in the three largest cities in each of those countries, and detailed interviews with experts in the law and related disciplines from each country. There was no government involvement in the survey process.

The general population surveys sought to emphasize real-life experiences with government agencies, courts, law enforcement and other elements of each country’s justice system, Agrast emphasizes. “We were not asking their philosophical views of the rule of law,” he says. The surveys were based on levels of progressively detailed factors that help define the rule of law in terms of four basic principles (see chart below).

Agrast and Juan Botero, staff director for the Rule of Law Index team, say that while the index findings have a useful comparative component, especially between countries in similar socioeconomic circumstances, it is not intended to be a ranking of countries.

The comparative aspect “has been a real challenge for us,” Agrast says. “We didn’t want to produce a U.S. News & World Report version of a Rule of Law Index. We’re looking to help countries reform rather than say, ‘You’re wonderful and you’re terrible.’ ” But, referring to analysts, he notes, “Once you loose this data on the world, they’ll slice and dice as they wish.”

The index is still in its early stages, Agrast and Botero say. Statistical gaps for some surveyed countries are being filled in, and survey results will undergo more fine-tuning and analysis before a final version of the report is issued in early 2010. Meanwhile, survey efforts continue, with a goal of bringing the number of countries covered to 100—accounting for 95 percent of the world’s population—by the end of 2011.

The index will be an on?going endeavor to help countries measure their efforts to improve adherence with rule of law principles.

The World Justice Project was founded by William H. Neukom of San Francisco, who served as ABA president in 2007-08. It initially operated with extensive staff and logistical support from the ABA and with financial support from several sponsors. In September the project became an independent not-for-profit corporation, although it will continue to occupy space at the ABA’s Washington, D.C., offices through March 2010.

How the US Measures Up

The survey measured 15 factors that define four key principles of the rule of law. The U.S. scored competitively on almost all of the factors, but received the highest score among its peer group on only two. On the other factors the U.S. scored somewhat lower than the aggregate scores for its peer group, and in three areas the United States was significantly off the pace for its group.

The Rule of Law Index is based on surveys of citizens and experts in the law and related disciplines conducted in 35 countries. Each country’s results were compared to those of other nations with comparable per capita incomes (as defined by the World Bank) in four groupings. 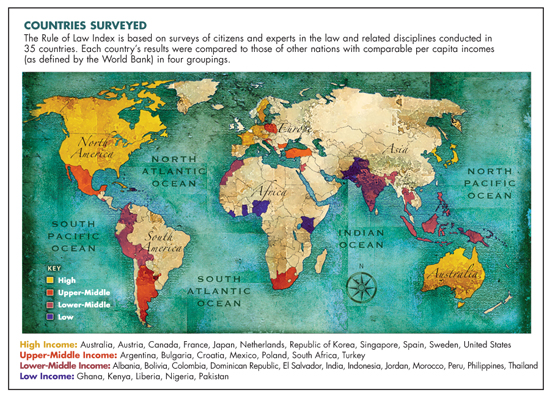