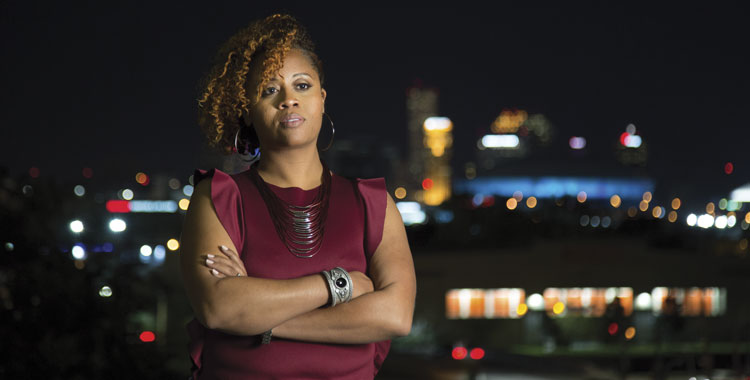 When Syrita Steib-Martin was released from prison, she knew she wanted to go back to school.

The daughter of a workers’ compensation judge, Steib-Martin grew up expecting to get an education. But she was a wild teenager who, at 19, helped rob a car dealership and set it on fire. She paid for those actions with 10 years of her life.

In prison, Steib-Martin started taking community college classes, earning a 3.8 grade-point average. But the application to the University of New Orleans asked whether she’d ever been convicted of a crime. She told the truth, and the university rejected her.

Two years later, Steib-Martin was married, pregnant and ready for a career that could help provide for her son, who turned 6 in September. So she reapplied—and this time, she didn’t disclose her conviction. She was admitted with a scholarship and eventually earned a degree in clinical laboratory science.

“The only thing I changed was that I unchecked the box,” she says.

Today, Steib-Martin balances her job as a hospital laboratory supervisor with motherhood and her nonprofit, Operation Restoration, which seeks to lift barriers to education for formerly incarcerated women. In February, she was advocating for that goal when she told her story to a town hall meeting organized by the Louisiana Justice Reinvestment Task Force.

The task force was listening—but so were state Reps. Vincent Pierre, D-Lafayette, and Edward C. “Ted” James, D-Baton Rouge, who were both in the audience. After the meeting, they drew up legislation forbidding Louisiana’s public colleges and universities from asking about criminal convictions.

Steib-Martin didn’t find out about it until six weeks later, when she emceed a rally for justice reform legislation in front of the state Capitol. Despite the large crowd, Pierre ended up standing right behind Steib-Martin. He asked her and her partner at Operation Restoration, Annie Freitas, if they could suggest any changes to the bill. “And then we took the bill and we basically rewrote it,” Steib-Martin says.

Steib-Martin had no legislative drafting experience, although she writes policies for her job. So she and Freitas researched similar bills from other states, picking the features they liked from each one and adding new provisions that achieved their goals. They met with stakeholders to discuss concerns about the bill. Steib-Martin soon found herself visiting the state legislature more often—even when she didn’t have to be there—“just getting in tune with the committees and the procedures and the processes.”

HB 688 ultimately passed with large bipartisan majorities, making Louisiana the first state to “ban the box” for college admissions. And Steib-Martin developed a taste for legislating as a way to create change. She has nine more bills ready for Louisiana’s next legislative session, all on issues related to incarceration.

“If it’s a law, it’s written in stone,” she says. “And it’s not always that it’ll be followed, but at least you have something to start from.”

This article was published in the December 2017 issue of the ABA Journal with the title “A Former Inmate-Turned-Activist Tells Her Story and Gets Drawn Into Policymaking.”